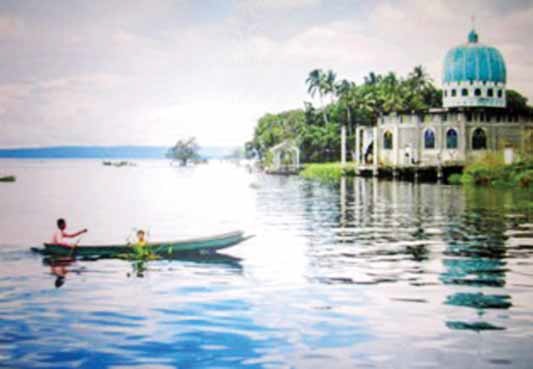 Lake Lanao is our country’s second largest lake, located in Lanao del Sur, Mindanao. It has a surface area of 35,700 hectares, a lake surface elevation of 702 meters above sea level and average depth of 60.3 meters. The lake is one of the 17 ancient lakes of the world and is believed to be millions of years old.

There used to be 18 species of endemic fishes (cyprinids) in the lake that contributed much to its fisheries production and the livelihoods of Maranao fisherfolk dependent on it. In a recent field survey of Armi Torres, a Ph.D. student of the University of the Philippines Los Baňos’ School of Environmental Science and Management, only one species of the endemic carp-like fishes was found and possibly two other species could still be existing.

In a market survey conducted by Domiciano Villaluz in 1963-64, the cyprinids of the Lake Lanao constituted 49.4% of the 991,120 kg of fishes caught followed by the white goby (Glossogobius giurus) and Mozambique tilapia (Tilapia mossambica) with 6.4% (127,750 kg), and 5.5% (109,500 kg), respectively. The tilapia (an exotic fish) was deliberately stocked in the lake for fisheries enhancement while the white goby (a native fish not found in the lake) is believed to have been inadvertently stocked with it in the early 1960s.

By 1990-91, the fish landing survey of Prof. Escudero showed that the cyprinids only represented 9% of the catch with 22,442 kg while the share of the Nile tilapia was 28.3% with 71,056 kg and that of the white goby was 0.92% with 2,308 kg. A shocking finding of the study was that 31.6% of the catch consisted of the eleotrid, Giurus margaritacea, another inadvertently introduced fish in Lake Lanao.

The eleotrid, known to the Maranaos as “katulong,” is a voracious feeder that preys on the eggs, larvae and young of the cyprinids that inhabit the shallow areas of the lake with vegetation. How it was introduced in the lake is not exactly known. It is thought that it came along accidentally with the Nile tilapia fingerlings stocked in the lake from the Kitcharao fish hatchery in Surigao del Norte of the Bureau of Fisheries and Aquatic Resources which is beside Lake Mainit where the eleotrid is also found.

A survey of the fishes landed in three out of the 19 municipalities surrounding Lake Lanao in 2008 by G. Ismail and co-researchers showed that the catch quantities for two cyprinid species, Barbodes tumba and Barbodes lindog, were only 7.02 kg (0.04% of total catch) and 1.76% (0.01%), respectively, while those for the catch of the eleotrid and Nile tilapia were 67% and 26% of the total catch, respectively.

One reason for the proliferation of the introduced eleotrid in Lake Lanao could be the lack of a predator for it like the euryhaline eel, Anguilla celebesensis, which migrates to the sea from the lake through the Agus River, the main outlet of the lake. The eel is found in Lake Mainit and its loss in Lake Lanao could be due to the changes made in the Agus River for the hydroelectric facilities of the National Power Corporation that may have prevented the fish from swimming into the lake.

Can the remaining cyprinid in Lake Lanao still be saved?

In the survey of Armi Torres in 2016-2017, only the Barbodes tumba was found in the river tributaries of the lake. Two other species, Barbodes lindog and Barbodes sirang, were not found and were regarded as possibly extinct.

Prof. Escudero reported on the successful breeding through induced spawning of the Barbodes tumba and Barbodes sirang in Marawi City in 1990. However, no follow-up on this was done. If the fishes were bred in captivity and kept out of the lake to avoid predation by the eleotrid, they would be in abundance today.

Another conservation strategy for the remaining cyprinid (Barbodes tumba) is to transfer it to a natural water body like a small mountain lake that does not have the eleotrid or other predaceous species. This was done by Dr. Victor Soliman of the Bicol University’s College of Fisheries in Tabaco, Albay who transferred the “sinarapan” (Mystichthys luzonensis), an endemic fish in Lake Buhi in Camarines Sur to Lake Manapao, where it is now thriving.

Flowers may be complementary medicine for recovering patients