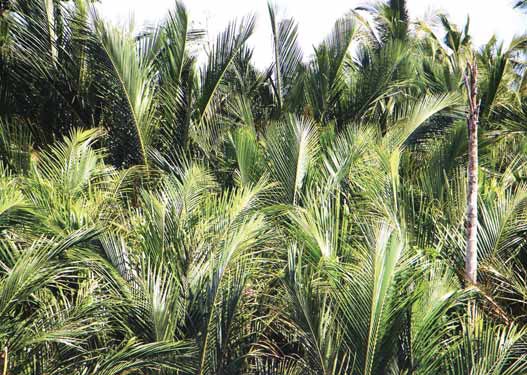 If you are planning to visit Butuan City in the Caraga Region, be sure to have a taste of “palagsing,” a unique local delicacy which is produced from the lumbia tree or sago palm (Metroxylon sagu).

The age-old tradition of cooking palagsing has been mastered in Barangay Banza, one of the oldest villages in Butuan, by 60-year-old Maurita Ariola Avenido who has been making the delicacy since her younger years after learning the artistry from her parents.

The distinction of cooking palagsing in Barangay Banza can be attributed to the abundance of sago palm where the “unaw” or lumbia starch is harvested from the palm tree. It is mixed with the meat of young coconut and brown sugar to make the delicacy moist and chewy, and very nice and tasty to eat. Palagsing is like the common “suman” as it is also wrapped in banana leaves, but tastes very different – a must try for delicacy lovers. 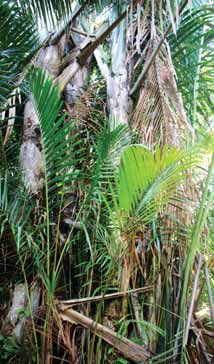 Sago palm produces 200 to 300 kilograms of dry starch per stem, making it the highest-yielding perennial starch crop in the world.

According to Avenido, palagsing has been the main source of her family’s income, which allowed her and her husband Leonardo Avenido to send their children and their grandchildren to school. She says unaw has historically been among the staple foods in their area because the sago palm was so abundant, making unaw processing a vital economic activity in their barangay.

The commercial value of a sago palm is vital for the community because it is the main source of sago that is obtained from the trunk by washing the kernels by pulverizing the pith of the stem. During the earlier years, the rich starch obtained from the bark of the sago palm has become the staple food among marshland dwellers, particularly the indigenous people. The starch is also the source of commercialized sago which we commonly use in the preparation of halo-halo and other refreshing drinks.

However, the livelihood of Avenido and her family, including the other palagsing makers, is threatened due to the unregulated cutting of the sago palm and the conversion of the plant’s habitats into ricefields and other commercial purposes.

Sago palms grow well in humid tropical lowlands and can tolerate acidic soils. They are usually found growing on buffer zones in swamplands. The sago palm produces 200 to 300 kilograms of dry starch per stem, eight to nine years after planting, making it the highest-yielding perennial starch crop in the world.

In the wild, it does not require re-planting because it can propagate itself through suckers.

Due to its significance, sago is now one of the priority commodities of the Philippine Council for Agriculture, Aquatic and Natural Resources Research and Developmentof the Department of Science and Technology (DOST-PCAARRD) under its industry strategic program (ISP) because of its economic importance and high global demand for sago starch for industrial and medical purposes, earning it the title “plant of the future.”

To address the dwindling supply of sago starch, the DOST-PCAARRD provided the necessary science and technology interventions through the ISP on Industrial Tree Plantation (ITP). Because of the great demand for sago starch for various industrial purposes, cultivation of sago palm is now considered of prime importance.

However, it has become increasingly difficult to meet the demand for superior planting materials through sucker propagation because of low survival of planting material. The bottleneck of sago palm plantations has been attributed to low survivability of planting suckers and lack of accurate data on exploiting wildlings for field planting purposes.

To focus on these urgent concerns, PCAARRD, in partnership with the Caraga State University (CSU), Aklan State University (ASU), and the Visayas State University (VSU), came up with science and technology-based strategies on how quality planting materials can contribute to the overall success in the production of sago crop for plantation establishment and rehabilitation strategies to properly manage existing natural sago palm stands.

Because of this, PCAARRD has already identified at least three sago palm producing areas in the country, namely: Aklan in Region 6, Leyte in Region 8, and Butuan in the Caraga Region.

The initiative of PCAARRD was highlighted during the Farms and Industries Encounter through the Science and Technology Agenda (FIESTA) which was recently held in Butuan City. The activity was organized by the Consortium for Agriculture, Aquatic and Natural Resources Research and Development (CCAARRD) led by Dr. Raquel M. Balanay, the consortium director, together with CCAARRD/RRDCC chairman and CSU president Dr. Anthony M. Penaso, and consortium techno transfer cluster coordinator Dr. Gerardo F. Estoy Jr.

The Caraga FIESTA, which was initiated and funded by PCAARRD, is a technology diffusion platform.

According to PCAARRD’s Applied Communication Division director Marita A. Carlos, who represented PCAARRD acting executive director Reynaldo V. Ebora during the event, FIESTA is a PCAARRD event-based technology transfer modality that aims to promote science and technology (S&T) and its products towards providing competitive and profitable business ventures for the micro, small, and medium enterprises in the agriculture, aquatic, and natural resources sectors of the country.

Carlos emphasized that PCAARRD will continue to support programs and projects on sago palm with their partners, especially the state colleges and universities (SUCs) and local government units(LGUs), not only on joint R&D but also on technical assistance, generation of information, and exchange of strategies/technologies.

These can be achieved through:
• Development of rehabilitation strategies for existing sago plantations, and identifying sites for pilot-scale plantation development;
• Production of IEC materials;
• Establishment of nurseries and field experiments for suckers and wildings;
• Protocols/guidelines in managing sustainable sago plantations;
• Policy recommendation for the maintenance of natural sago stands.

PCAARRD envisions that in the near future, our country will be self-sufficient on the demands for starch from sago palm, and the empowered farmers would be change agents, adopters of package of technology options, and advocates of scientific sago palm farming, or perhaps become scientific producers of “palagsing.”

Name of the game is hybrid vigor in goat dairying