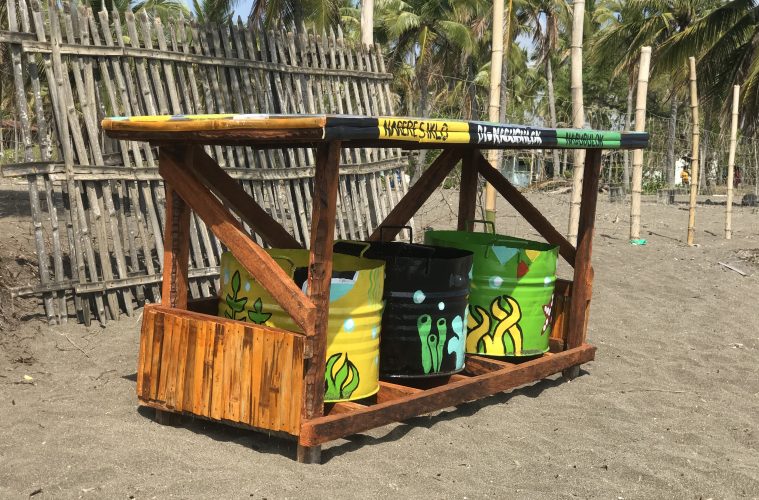 Garbage disposal has been a rampant problem of the San Juan, Batangas shoreline. This is changing in Barangay Calubcub 2.0 in San Juan, Batangas, where a group of young students from the Joseph Marello Institute have started a project that has cleaned up part of the shore.

The group consulted with the local government, particularly the Municipal Environment and Natural Resources Office (MENRO) under Mr. Noelito Pasco, who suggested the Catmon and Calubcub 2.0 coasts because these two have waste disposal problems. Macatangay, Saligao, et. al. chose Calubcub 2.0 because its nearer to them than Catmon.

The students decided to make trash segregation bins, called “Fishurahan,” (from ‘fish’ and ‘basurahan’–trash can in Filipino). The project is supported by AboitizLand Incorporated, together with construction partner JC Rodriguez Construction Corporation (JCRCC). The companies are building a subdivision near the shoreline and the waste on the coast is also their problem. They extended help to the students by funding the materials needed for the Fishurahans.

Today, even if there’s only one set of Fishurahan present, there has been a lot of improvement on the coast of Calubcub 2.0. The shore is much cleaner and trash is segregated properly. It is also monitored by the students weekly because one of them, Vasquez, lives near the area. This helped not only the students but the locals as well because they see the importance of proper waste disposal and segregation.

The Fishurahans sport different sea creatures as designs, which has helped entice locals to throw their garbage properly. There are plans of having more sets of Fishurahans in the area since the locals demand so. The non-biodegradable garbage thrown in the Fishurahans are collected by MENRO and are turned into eco-bricks.

“We saw changes even with simple actions like this. There’s nothing wrong with being active, especially if it benefits everyone,” said Macatangay. Together with the team, they encourage the youth to be aware and to take care of the environment especially in the present situation.