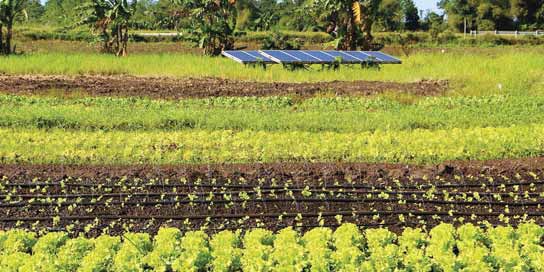 The production of organic lettuce in the country has grown significantly because many Filipinos are now leaning towards attaining a healthy lifestyle. It has become the most popular vegetable for the preparation of fresh salads, sandwiches, and an array of other dishes that require the use of this crop.

However, the objective of producing organic lettuce and other high value crops requires an intensive setup, according to Ramon Uy Jr. and his wife Francine, who own and manage the Fresh Start Organic Farm in Barangay Rizal, Silay City, Negros Occidental.

To maintain an organic farm, the couple assures that extensive land preparation must be observed. Uy Jr. says land preparation is done by applying processed organic fertilizer which is composed of carbonized rice hull, chicken manure, and vermicompost, under the supervision of farm caretaker Joselito Cabunsac.

When asked as to why he preferred using vermicompost for their farm, Uy Jr. says it is a rich, friable, and soil-like material made from farm wastes, crop residues, grass clippings, green manure crops, fallen leaves, vegetables, kitchen refuse, animal manure, and other decomposable materials.

Composting is the process of breaking down these organic materials by means of soil organisms to produce biologically stable products that can act as slow-release sources of plant-available nutrients, thereby improving the nutrient status and the biochemical and physical properties of the soil. Thus, compost improves soil quality by acting as soil conditioner and provides lasting benefits because it is environment-friendly.

Incidentally, before embarking on their organic farm project, the couple first started with an organic fertilizer business, primarily based on vermicomposting. Uy Jr. says that composting materials are always available right at the farm, allowing them to easily prepare vermicompost, providing a cheaper, healthier alternative to expensive commercial fertilizers.

“We saw a future in organic farming. That’s the reason why we embarked on establishing our own farm,” he says. “However, some people thought that our idea was unorthodox because conventional fertilizers were a lot cheaper at that time. But we believed in our organic crops. He added that crops grown using their natural fertilizer were bigger and healthier, compared with those using synthetic inputs.

As a devoted supporter of the organic movement, the couple fully believes in the importance of promoting good health, fair trade, and healthy environment. “For us, profit is three-fold: environmental, social, economic. We make it a point that our practices will not harm, and in fact, preserve the environment. We want our stakeholders, especially our partner farmers, to get a fair price for their efforts,” Uy Jr. explained.

Uy says the objective of producing organic lettuce and other high-value crops requires an intensive setup. Crops which are grown using natural fertilizer can become bigger and healthier, compared with those using synthetic inputs.

After all, farmers can save a lot on fertilizer cost by using vermicompost. Generally, compost is now widely used as a soil amendment to improve soil structure, to provide plant nutrients, and support living organisms. It also improves the fertility of the soil, and drainage of the field is likewise improved because it promotes better aeration, thus, the soil becomes easier to plow. It makes the soil a more favorable medium for the development of root systems of growing plants. “To control pests, we sprayed our crops with bio-insecticides, like vermitea, and other organic formulations,” he shared.

Another innovation introduced by the Fresh Start Organic Farm is the use of a solar-powered irrigation system to irrigate their high-value crops like the different varieties of lettuce, kale, herbs, and spices, which were cultivated using quality Condor Seeds that the couple sourced from Allied Botanical Corporation (ABC).

Among the Condor lettuce varieties include the Carlo Rossa, Red Romaine, Fanfare, and Tyrol. The varieties of herbs on the farm include arugula, basil, basil Genovese or sweet basil, chives, dill, oregano, rosemary, tarragon, and thyme. To maintain the quality of these high-value crops, Fresh Start Organic Farm maintains several greenhouses which are regularly manned by reliable and experienced farmhands.

As a result of strict fertilization regimen application of organic materials, the farm now produces hundreds of kilos of high-quality organic lettuce per harvest schedule. “Organic requires changing the mindset of the farmers who want to earn a quick profit. We are continuously working to make more farmers adapt healthy practices, so that in the coming years, organic will become the conventional way of farming,” Uy Jr. says.

Now with more than 50 employees and several partners, Fresh Start has established an outlet at the SM City in Bacolod called Fresh Start Organic and Natural, a retail shop which serves delicious and satisfying organic dishes, organic beverages, and other organic products like fresh vegetables, fruits, coffee, red and black rice, natural sweeteners, and even soaps, insect repellents, scented oils, among many others.

“Some may claim that the prices of organic products are high but if you prefer paying for the cheap price of fast and ready-to eat foods now, you might be spending a lot more for maintaining your health later, including the price for maintaining the environment,” he says.

Fresh Start has its own self-propelled compost turner which is used in the turning and fermentation of different organic matters which can be made into green and pollution-free organic fertilizer.

Likewise, they are now supplying the lettuce requirements of several malls in the country, such as two malls in Bacolod, two malls in Iloilo City, two malls in Dumaguete City, and even two more malls in Metro Manila.