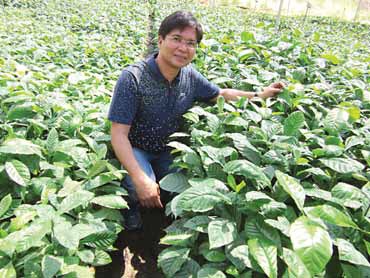 Newly appointed Tourism Secretary Berna Romulo-Puyat has advocated farm tourism as a flagship strategy. It is a sound direction.

In a related development, Senator Cynthia A. Villar, chair of the Senate Agriculture and Food Committee, led the launching of a farm tourism initiative in October 2017. Her counterpart in the House is Congresswoman Sharon Garin. Both strongly support farm tourism as a profitable business proposition to farmers and farm owners.

What are the typical farm tourism destinations in the ASEAN neighborhood? This article will discuss examples from Malaysia and the Philippines.

1. Dairy farm. A popular farm tourism destination in Malaysia is Desa Dairy Farm, which is located at the foot of Mount Kinabalu in Kundasang, Sabah. It is dubbed as “Little New Zealand” for its green landscape and cool breeze. The cattle breed of Holstein Friesian is imported from New Zealand. Yoghurts, milk, cows, sheep, and magnificent farmland are among the attraction. See more on Malaysia farm tourism.

2. Tropical fruit farms. Penang Island hosts a Tropical Fruit Farm, which is a popular tourist site with a wide range of exotic and rare fruits. The farm orchard, developed in 1993, boasts of around 250 different species of fruits from different parts of the world.

Fruiting pummelo in a rubberized container at a farm in Teresa, Rizal.

3. Buffalo/Carabao Farms. In the Buffalo Park in Langkawi Island, north of Penang, one can become a farmer for a day and get to enjoy tender and juicy buffalo meat. This is also an ideal place to buy yoghurt ice cream, cheese, and souvenirs.

The Philippine Carabao Center in Muñoz, Nueva Ecija is a showcase of farm tourism in the country, according to Senator Villar. It has its own processing plant for carabao milk and an outlet where processed products from farm cooperatives can be bought.

4. Farm resorts. In Davao City, the Malagos Farm Resort provides a different experience from cacao farm to chocolate making. It is a one-hour drive from the city center.

Nearby is the Philippine Eagle Center (PEC), an 8.4-hectare area located at the foothills of Mt. Apo. PEC operates as a conservation breeding facility for the critically endangered Philippine Eagle and other birds of prey. There are currently 7 Philippine Eagles in exhibit for education. The Center does not only have Philippine Eagles to show but there are a number of other birds, mammals and reptiles as well, most of which are endemic to the country and some are considered rare.

5. Organic farms. In the Zenxin Organic Farm in Johor, Malaysia, the scenery and landscape are described as just like a movie scene from Alice in Wonderland. It is the first public organic farm in the country. The farm is not only for recreation purposes but also for education. There is a vegetable farm, a dragon fruit farm, as well as over 100 types of herbs and other organic fruits.

The Lao Integrated Farm in Bansalan, Davao del Sur has similar operations. It is 80-km south of Davao City or a good two-hour ride passing through Digos City. Lao produces coconut syrup, coconut sugar, turmeric tea. It exports most of its certified products.

The Diaspora Farm in Bacolor, Pampanga is another. The Pinatubo eruption in 1991 forced many to relocate as the land has virtually turned into a desert. The Patdu family who hails from Bacolor were among the few brave ones to come back. Since rice farming and vegetable production are not feasible, they shifted to fruit trees like mangoes, guyabano, guava, santol and many more. Different farm animals were introduced like carabao, cattle, goats, sheep, chicken, geese, turkey and native pigs. The farm has progressed and currently applies a fruit-based and livestock integrated farming.

6. Crocodile Farming. The Tuaran Crocodile Farm in Sabah has about 1,000 crocodiles. The attraction consists of not just the various species of crocodiles, but also the performance of the crocodile trainers.The farm also helps in the conservation efforts for crocodiles by educating the public on the importance of reptiles to the ecosystem. The saltwater crocodile is a widely known species and one of the main attractions in the farm. Other wildlife present in the farm include monitor lizards, turtles, birds, snakes, and many others.

7. Farm Tourism Complex. The sprawling Eden Nature Park in Davao City has many offerings: bird walk, deer park, flower garden, butterfly and hydroponics sites, among others. The park is 26-km from the city center.

Farm tourism has endless possibilities with varied agro-climatic conditions and food menus in the Philippines.

Prolific Paniyur black pepper from India at the Sarian Farm.

Senator Villar is on the right track: that increasing food production and farm productivity alone cannot move the rural poor out of poverty. Stringing clusters of destinations plus food tours can make farm tourism a success.

According to tourism experts, infrastructure and affordable lodging must be part-and-parcel of the strategy. The Malaysia destinations have great connectivity. Sabah and Penang have international air access while Johor is a bridge from Singapore. The Philippines can learn from them. This calls for robust tourism-infrastructure convergence program.

Do you have ‘plant blindness’? Here’s how you can avoid it