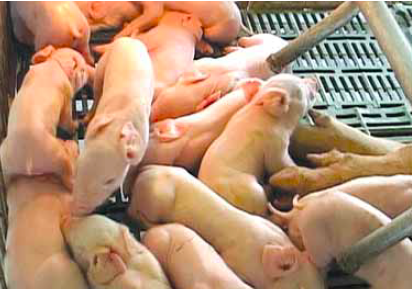 Female breeders should come from a litter of eight or more good-sized piglets with hgh survival rates.

We keep remembering a very successful land reform resettlement project that we visited in 2013 in Thailand. This was the Nong-Wah Agricultural Village in the province of Chachoengsao, some two hours drive from Bangkok towards the northeast.

In 1978, the Thai King allocated 200 hectares of brushland to 50 landless families so they could engage in farming. When we visited the village, all the 50 families, no exception, had become millionaires in their own right. From practically zero asset, each family had become richer by at least six million baht. Many, however, had accumulated much more assets than that.

The transformation was a result of the cooperation of the bank and CP Foods, the giant food and agriculture company in Thailand.

In the beginning, the settlers had no money to start their farming. But CP Foods had a bright idea. Their experts trained the farmers to take care of breeding hogs to produce piglets the scientific way. Then CP Foods would buy all the piglets for its contract farming of slaughter hogs with farmers outside of Nong-Wah.

CP Foods convinced the bank to lend each settler 300,000 baht as capital to pay for the construction of hog houses, the breeding animals, feeds and other expenses. The giant firm assured the bank that the farmers would be able to repay their loans because they were assured of the market for the weanlings they produced. And indeed, the borrowers were able to amortize all their loans.

Pakdee Thai Siam was easily one of the most successful settlers we met who had become a multi-millionaire. He was 50 when we interviewed him and was the president of the village cooperative. He received a monthly salary of 1,500 baht per month from the co-op but he made much more than that from his pigs and other projects.

He started taking care of 30 sows which grew and grew in number through the years. At the time of our interview in 2013, he was  taking care of 600 sows, each producing about 22 weanlings a year. At 1,200 baht per weanling, Pakdee was able to gross 26,400 baht from the 22 piglets produced by one sow per year.

Pakdee seemed reluctant at first to disclose how much profit he made every month, but after some prodding, he admitted that he made about 200,000 baht per month from his piggery. And that’s why he could afford to send his daughter to a medical school. He had also bought a 15-hectare property outside of Nong-Wah which he planted to rubber trees.

At the time of our visit, Nong-Wah Agricultural Village was a modern community with
well-paved roads. The place was beautifully landscaped and the plants well maintained. The village did not smell like an ordinary pig farming community. That was because the pig manure was turned into electricity and organic fertilizer by means of a biogas system. The biogas facility was responsible for supplying the village with 30 percent of its energy requirements.

What can be learned from Slovenia’s policies for bees