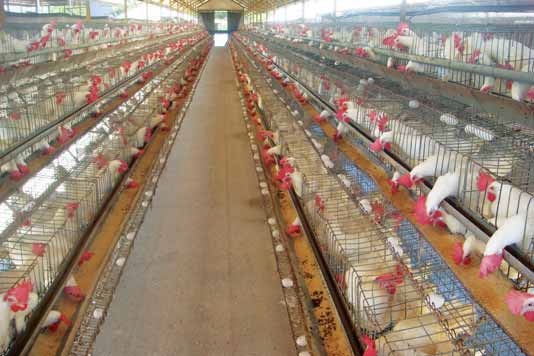 Not many people may realize it, but wire cages for chicken layers are a very important contribution to the improvement of commercial poultry production in the Philippines. And the fellow responsible for that is a Caviteño by the name of Jose P. Abellar. He is a familiar face during the annual Agrilink trade show in October where he showcases his poultry equipment.

Poultry wire cages are just one of his contributions to the local poultry business. The cages are one cubic foot where two layers are confined. It is where they eat and lay their eggs. They are not let loose during their egg-laying lives which could be more than one year from the start of laying when they are just over eight weeks old.

Before Abellar introduced the idea in 1968, poultry raisers grew their birds in colonies or in cages made of wood or bamboo. The trouble with bamboo or wooden cages is that they are not easy to clean. Manure and feed particles would stick to them. And there are crevices where external parasites like ticks and lice could hide. Eggs of intestinal worms
stick to the wooden cages and the birds would pick them up. In short, it is difficult to maintain proper sanitation.

The sanitation problems are minimized with the use of wire cages. This is because ticks and lice don’t have any place to hide in wire cages. The eggs of intestinal worms don’t stick on the wire so that chickens don’t get the parasite. There is also better ventilation so the birds don’t suffer from heat stroke. The inside of the house is brighter when wire cages are used so there is no need for lighting during daytime. One other important advantage is that the eggs are cleaner and there’s less breakage.

Abellar said he got the idea of wire cages for poultry during his stint in Taiwan from 1965 to 1967. He was a technical man at the Cobb’s poultry project in that country and also served as a manager of a feedmill there.

When he came back to the Philippines, he joined a marketing firm that sold veterinary products. But that was only for one year. He decided to be on his own and pursued the idea of introducing wire cages for layers.

Like any other technology that was being introduced for the first time, there was always some resistance from the users. The main objection then was the higher cost. But of course, Abellar was patient enough to explain the advantages of wire cages. Aside from the sanitation aspect, wire cages are long lasting and economical in the long run. They can be used continuously for 10 years or more without need for repairs.

Abellar is neither an agriculture graduate nor a veterinarian. But he may know more about the ins and outs of the poultry industry than some agriculturists and veterinarians. He actually started out to become a medical doctor. He was already a third year medical student at the FEU when he had to quit schooling because his father had died and had no means to continue his studies.

There were still only few veterinary graduates in the 1960s, andbecause of his medical background, he was hired by Mabuhay Feeds where he eventually rose to become the company’s veterinary products manager.

After two years with Mabuhay Feeds, he was recommended to the job in Taiwan where he eventually picked up the idea of wire cages for layers. He had come up with models for large poultry farms as well as small backyard raisers.

The fisheries of Tonle Sap, Cambodia