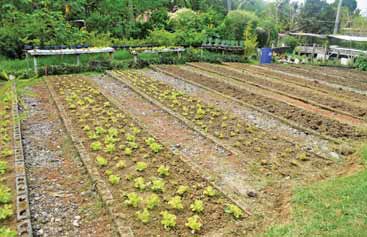 Saljay practices diversified farming. This technique allows him to take advantage of the maximum potential of his small farming area.

Now you have decided to start your own dream farm. Whether you are an enterprising millennial, a middle-ager or a senior citizen, here are some pointers to consider when you made up your mind to go into some kind of farming.

What is your purpose? Is it to make money? Is it for pleasure? Or  both? Are you going to farm full-time or part-time? Whichever, you will find it useful to heed some basic pointers so as not to be disappointed later on.

Let us say you have just acquired the land by one means or another. It could have been inherited from your parents. Or you could have bought the property with your own savings.

Planning is very important. You have to weigh the possibilities. And that is possible if you are sure of your resources, material or otherwise. Your resources besides the land could include the money you have to develop your farm, the skills you have in connection with farming, linkage with people who could help you in some way, and others.

Let us say you now have a clear vision of what product or products you want to produce. You want to grow them because you love to take care of them, and you think there is a market for your harvest. They also fit your available funding.

Experienced agri entrepreneurs will tell you that it is advisable to start small, especially if you have limited capital. That way you will not lose your shirt if you happen to commit a mistake. It is also best to use one’s own money, not borrowed cash.

Even if you have a lot of money, it is still wise to be prudent. We have met not a few who have unlimited funds that were used unnecessarily in starting their farm projects. Just like a fellow who started by planting 20 hectares to forest trees and fruit trees in his first year. He lost a lot because fire destroyed his first plantings. It could have been better if he had spent his millions in developing just two or four hectares that he could have taken good care of.

In farming, water is most important. You can’t grow plants and animals without water, good quality water. You are lucky if your farm is beside a river where you can draw water. Luckier still if you have a spring right in the farm. However, if the property is rainfed, it does not mean it is the end of the world. There are strategies that can make the farm productive though not as productive as one where there is available water throughout the year.

Make sure to fence your property so stray animals will not enter your property and destroy your plants. Fencing could require a big amount, especially if the farm consists of several hectares, it could cost millions of pesos. But there are creative means to avoid spending so much for fencing at the start. One way is to just fence the first phase with a temporary fence. Like what? Using fishnet and bamboo stumps to surround the area to be developed first. When funds will be available later, the whole area could be fenced phase by phase with more or less permanent fence.

Basic farm structures include the farm house for the owner, quarters for workers if they are stay-in, roofed working area, and a structure for storing tools and farm inputs.

Recruiting farm workers can be tricky. An undeveloped farm is usually bare and workers have to work under full sun. Many workers don’t last under such conditions. But there are those who will persevere, especially if they are not college graduates who could shift to less taxing chores.

One farm owner in Laguna prefers workers from Negros. Why? He said they are used to hard work as “sacadas”. Besides, they come from a far place, which means they will not go on vacation often. Another owner of an orchid farm says she likes her workers from Bohol because they are hardworking. A prawn pond owner, on the other hand, prefers women workers because they don’t go to beer gardens at night. Well, actually there is no sure fire way of recruiting the right farm workers.

Using edible rice straw is one step into saving the Earth