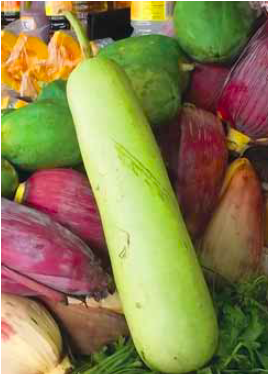 Upo, which is abundant in the country, is also one of the common ingredients of a variety of Filipino dishes because of its health benefits.

Vegetables are expensive in Manila as observed by Arsenio ‘Toto’ Barcelona, an agribusiness entrepreneur. Quality is also very poor compared to Thailand’s. This year’s consumer price index (CPI) placed vegetable as having the highest price increase.

In July 2018, CPI rose 5.7 percent compared to previous year. There was price acceleration from 4.4 percent in January. The food price index was higher at 7.1 percent in July 2018. Vegetables rose 16 percent: 22 percent in the National Capital Region (NCR), and 15 percent in other regions.

It is time for NCR to diversify its sourcing from nearby areas.

To address the high vegetable prices, there is a need to look beyond the traditional sources like Benguet, Nueva Ecija, and Quezon. One area which is seen to have the potential to become Metro Manila’s vegetable and fruit basket is Eastern Rizal.

As a future vegetable and short-term fruit basket, it has a nearby market of around
3.4 million comprising the western towns of Rizal and Metro Manila. It can compete with Benguet, Nueva Ecija, and Quezon, given good agricultural practices, low logistics costs, and postharvest losses. 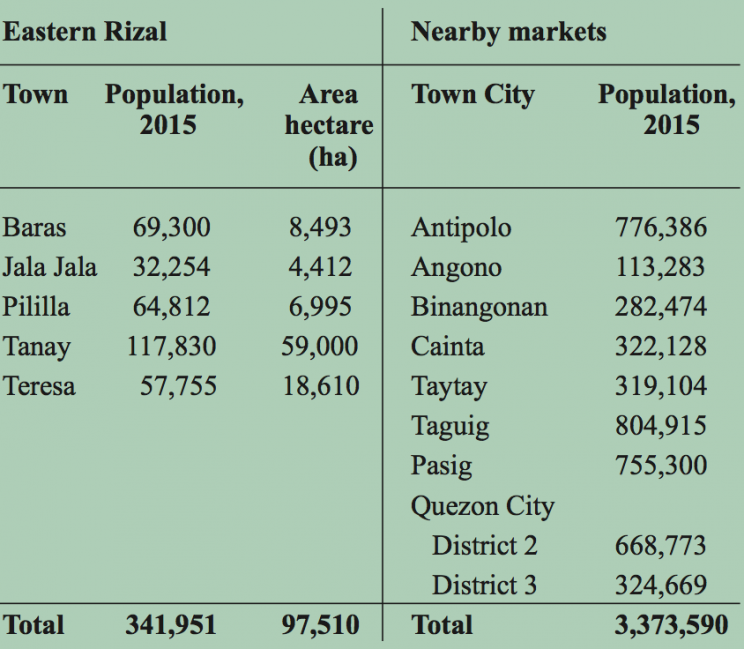 If eastern Rizal captures even just15 percent, the total market will be 30,600 tons a year or 2,550 tons a month. With a climate-proof and modern farming techniques, yielding 80 tons a year in four cycles of quality vegetables will only demand just about 400 hectares of land use versus the province’s total land area of 97,500 ha.

Assuming that an average
farm price is P20 per kilo, the total value will be P51 million a month or P612 million a year. This excludes short-term fruits like melons, and papaya. There is also a possibility for planting high-value fruit trees in
demand such as honey jackfruit, guyabano, and avocado. Sarian Farm’s exotic fruit tree nursery is just around the corner.

Profitable farming is not for everyone. Modern farms as small as 1,000 square meters (sq. m.) need equipment and proper management such as low-cost green house and drip
irrigation (drip irrigation and packing need farm scale). The same area can be planted four to five times a year for a gross profit of about P40,000 per year per 1,000 sq. m. (one tenth hectare), or P400,000 per hectare per year.

One business model is centralized management. Investors can put in capital for 1,000 square meters lot size, for axample. A professional management group takes care of operations, logistics and marketing to leading supermarkets.

This is a trailblazing project whose time has come. Interested investors are welcome.

Building something from trash: this company in Davao recycles plastics into furniture and more