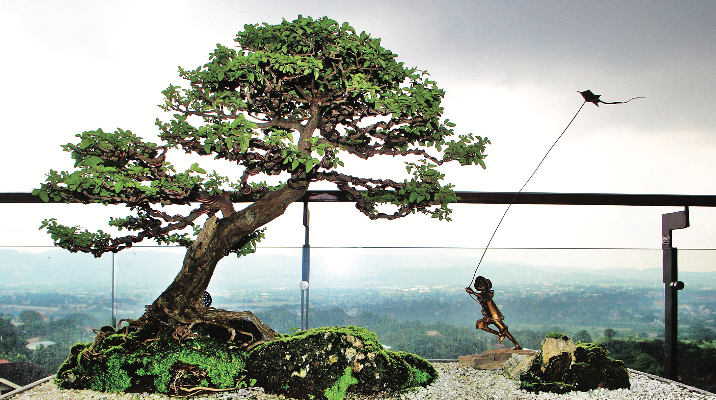 For an expert and award-winning enthusiast like seasoned architect Michael Peña, the most critical part of cultivating bonsai is the maintenance and care of the plant.

He says that aside from watering and careful repotting, proper fertilization is another
important thing to consider.

Since bonsai trees are planted in small containers, with a limited space and nutrients
available, fertilizing regularly during the tree’s growth season is very vital to keep it
healthy.

However, it will depend on the tree species – when, how much, and how often it should
be fertilized.

For the beginners, bonsai, which means tray planting in Japanese, is the art of nurturing a dwarfed tree or shrub in a small but proportionate container, where the branches are accurately pruned and wired to attain a sculptured effect.

Peña says a bonsai tree should be patiently watered and fertilized, and nurtured with love because it takes years to cultivate one.

Locally, most enthusiasts prefer the bantigue (Pemphis acidula) which can withstand the effect of typhoons and scorching heat of the Philippine climate.

In 2010, one of Peña’s bantigue collections, which is in an upright style, garnered the top prize in a competition that was organized by the then newly-formed Bonsai and Suiseki Alliance of the Philippines.

This style mimics the work of nature where the trees try to twist or sway away from the wind and bend toward the sun.

Peña says proper cultivation and care of bonsai requires techniques and tools which are focused to support the growth and long-term maintenance of growing trees in small containers.

While ideas about the use of fertilizers and fertilization techniques may vary among
bonsai enthusiasts, Peña was able to adapt his own style. 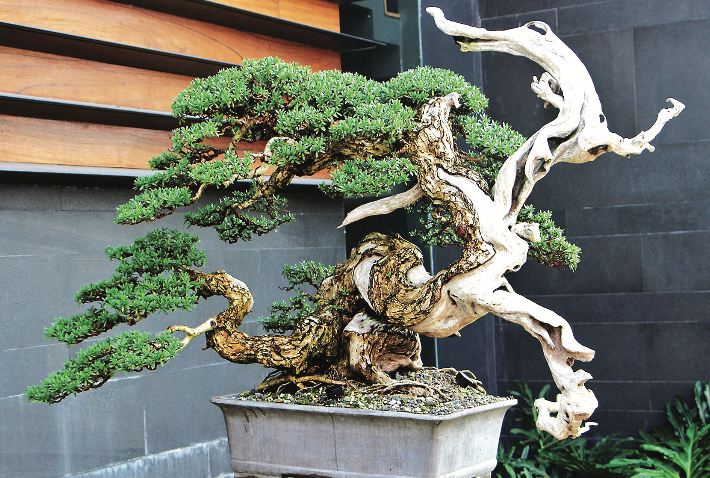 One of the rare bonsai collections of Peña.

For some, they promote the use of organic fertilizers to augment an essentially inorganic soil mix, while others use chemical fertilizers.

According to Peña, he uses Amino Plus Foliar Fertilizer (APFF) to make his bonsai collection healthy.

He said, maintaining the long-term health of a tree in a container will require specialized care techniques, which is one of the reasons why he prefers using APFF.

But he says that soil composition and fertilization must be focused to the needs of each bonsai tree.

Aside from fertilization, Peña says that watering a bonsai tree is the most important, saying that it must be done regularly, and should relate to the species’ requirement for dry, moist, or wet soil.

But since bantigue is commonly found along the coastal areas, it needs occasional
salt spray for its proper growth and development.

For Peña, he uses a small amount of “bagoong” to supplement the nutrient requirement of a bonsai bantigue, aside of course, from the regular application of APFF.

He says that after using APFF for some time already, his bonsai collection became healthier, and the leaves of his bonsai trees became more vibrant in color – becoming
dark green, which he said is a sign of a healthy tree.

For his part, Ricky Sun of Global Green Organic Fertilizer, Inc., the producer of
APFF, attributed the improvement to amino acid.

He says that trimmings and fish scraps, particularly of the mackerel type, are fermented to produce the organic foliar fertilizer. Mackerels are rich in Omega 3, which is good for the health of plants as well as animals, he adds. 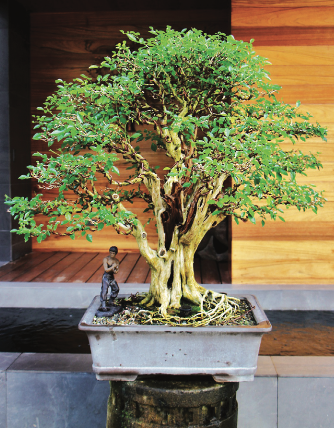 A dwarfed kamuning tree welcomes visitors at
the home of Peña.

Sun continues that unlike other fertilizers derived from fish and other natural sources,
APFF is not processed in high temperature, thus preventing denaturation of proteins
and retains the amino acids, enzymes, vitamins, and natural oil.

Bonsai trees sprayed with APFF can become more resistant to diseases and other stresses. When sprayed, it effectively adheres to the plant’s surface and provides quick supplementation.

Among the bonsai tree species that Peña cultivates include Bantigue, Agoho, and, Kamuning, among many others.

Peña says that some species are more popular as bonsai material because they have unique characteristics, such as small leaves or needles, which make them appropriate for the compact visual scope of bonsai.

For style, Peña shares that the most common include the formal upright, informal upright, slanting, semi-cascade, cascade, raft, literati, and group/forest.

Other uncommon styles include windswept, weeping, split-trunk, and driftwood.

These styles are not commonly exclusive, and a single bonsai specimen can exhibit more than one style characteristic.

Can you set-up a garden in space? NASA wants you!

When it rains, it pours: Caring for cacti and succulents during the rainy season