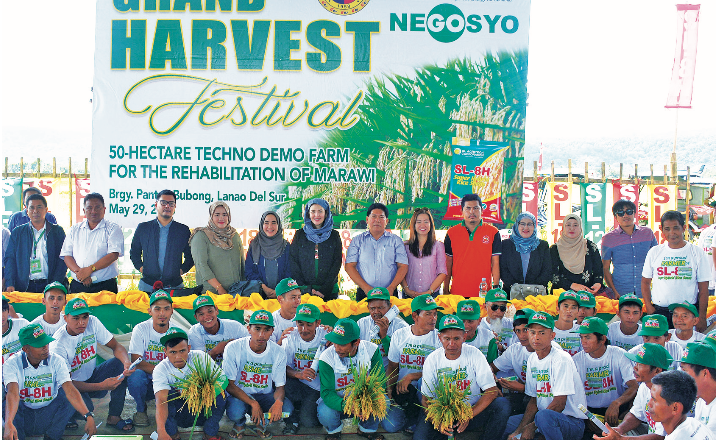 Keeping true to its commitment to help in the rehabilitation of war-torn Marawi, SL Agritech, the major hybrid rice producer in the country, celebrated the first harvest festival in the 50-hectare technology demonstration farm planted with SL hybrid rice seeds. The milestone was also witnessed by Go Negosyo and the local government unit of Lanao del Sur together with the Maranao farmers.

The intervention was part of the rehabilitation efforts for the war-stricken Marawi city and agri-business development of the entire province. SL Agritech provided the technology and financing for the 50-hectare demo with total value amounting to P1.5 million. Technical assistance was also provided during the entire cropping season. Classes and farmers’ meeting were conducted to educate the farmers on the proper crop management practices of SL hybrid rice seeds.

Lanao del Sur, which covers Marawi, was identified by the Philippine Statistics Authority (PSA) as the top province with highest poverty incidence per family. The province’s average rice yield was only 3.73 metric tons per hectare predominantly using inbred rice varieties, which was proven to be insufficient to feed the entire province with more than one million population. The 50-hectare demo farm will help the farmers of Lanao to adapt to a new technology which will help them double their production and ultimately improve their way of living. 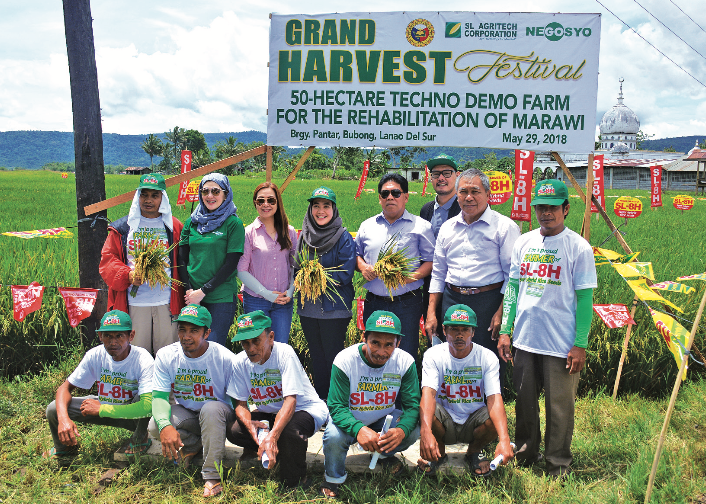 Some of the farmer-beneficiaries of the 50-hectare demo farm with (second from left, standing) Go Negosyo representative, Ginggay Hontiveros, Josephine Dungca of SL Agritech Corporation, a representative from the Office of the Governor, Dr. Frisco Malabanan of SL Agritech Corporation, and Engr. Mohamadali Macaraya, Provincial Agricuturist of Lanao del Sur.

“We want to bring the message to the people of Marawi that there’s hope. SL Agritech will put in the money for this techno-demo to inspire hope,” said SL Agritech Corp. Chairman Dr. Henry Lim Bon Liong during the signing of the Memorandum of Agreement early this year.

“Our technicians are all over Mindanao. Their marching order is to help the farmers of Mindanao to be a catalyst of change through the use of modern farming technology that will bring progress and economic growth in the rural community,” he added.

Reaping the fruits of labor

Two weeks after the festival, the farmers started to reap the fruits of their labor and the results were beyond their expectations.

Alanoding Seba – One of the remarkable recorded yields was 7.63 metric tons, almost double of their previous yield. Land owner Alanoding Seba said, he was extremely impressed with the performance of the SL varieties and promised to continue planting the same seed even after the pilot project. “These increments will really help us a lot. We can now pay for our debts and save some for the next cropping season,” he said.

Haris Ditucalan – Haris Ditucalan was also one of the farmer-beneficiaries of the project. He’s been wanting to own a motorcycle for his family for a very long time as the public transportation in their area is quite challenging. He revealed that most of the time, his produce were just enough for home consumption with nothing more left to sell. There were times that he needs to purchase commercial rice because his harvest will no longer be sufficient. That is why he was very delighted to be part of this project. He had no deeper knowledge on hybrid rice technology, however, his broad experience in rice farming and the determination to improve his rice production made it easier for him to
understand the protocol on planting hybrid rice. With the help of the SL technician, he was able to produce a staggering 6.2 mt on his 1.25 hectare land. He used to harvest an average of 2.8 mt on a 1.75 hectare land using inbred seeds. A week after harvesting his produce, Haris came home in a brand new motorcycle for his family. 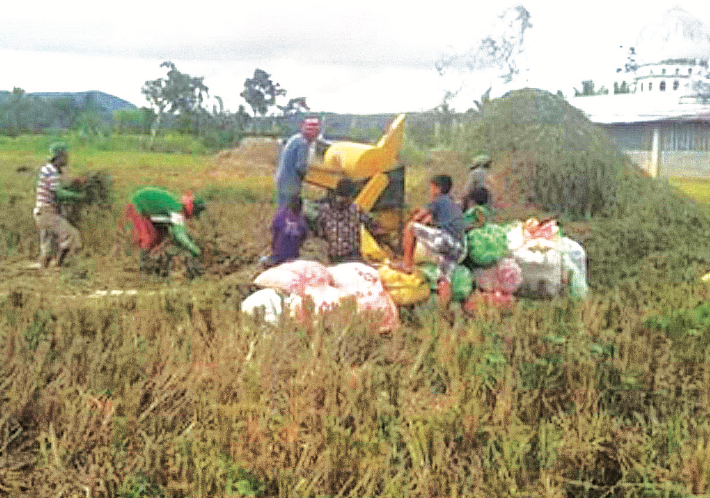 Harvesting at the 50-hectare demo farm established in Brgy. Pantar, Bubong, Lanao del Sur as part of rehabilitation efforts for Marawi City and for the economic development of Lanao del Sur in general.

Alibsar Tawacal – Instant life-changing experience was how Alibsar Tawacal, a native Maranao farmer, described the whole project. Back then, he already accepted the fact that they won’t be able to increase their production and improve their lives. Not until he’s given the opportunity to be one of the beneficiaries of the program. Just like most of the beneficiaries, Alibsar was new to hybrid rice technology. But in spite of this, he managed to yield 5.57 mt/ha. His previous yield was only 2.1 mt/ha. His earnings made it possible for him to buy a new tractor or “bao-bao” which made his farming a lot more easier.

SL Agritech has indeed brought new hopes and opened up a lot of opportunities for the farmers of Lanao del Sur.

“This is not an easy task nor a simple project. There were few concerns that needed to be addressed at the start of this project, like security considerations, logistics, and cultural differences. But SL Agritech still pushed for this project to happen. They were the only private company who stepped in our soil and left a great mark. For that, we are forever be in debt,” said Provincial Agriculturist Engr. Mohamadali Macaraya.

Lanao del Sur is just one of the provinces that SL Agritech has helped in terms of increasing rice productivity and improving the lives of the farmers. The company has worked with different provinces in increasing their rice production through hybrid rice technology. SL Agritech’s goal is to replicate such project in many parts of the country and reach as many farmers as possible in order to achieve rice-selfsufficiency for our country, and improve the lives of thousands of Filipino farmers.

First ever cactus and succulent exhibit held in the south