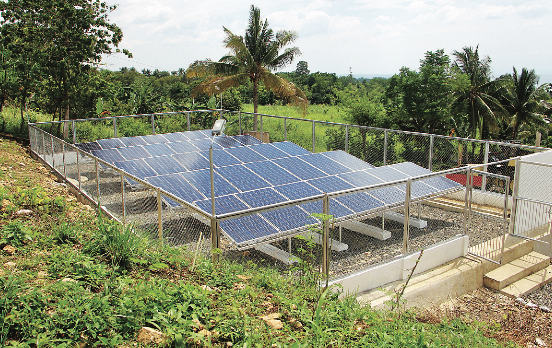 Most people in many relocation sites across the country live with limited access to water.

In some relocation sites, ground water is extracted through electric water pumps which use diesel to fuel the systems.

But these systems not only require costly, regular servicing, and the acquisition of fuel, they also emit carbon dioxide which pollutes the atmosphere. 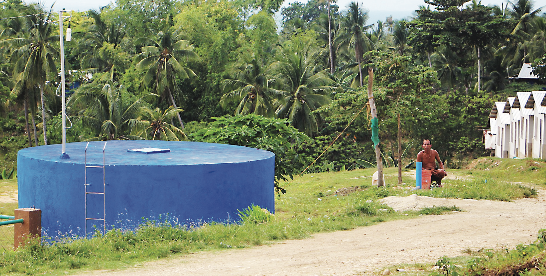 The solar-powered water facility was constructed by the Bacolod City-based R.U. Foundry and Machine Shop Corporation. The main reservoir tank was placed at the highest level of the site to ensure the steady flow of water to the different parts of the relocation area.

To veer away from the said barriers, the City Government of Guihulngan in Negros Oriental considered the implementation of a solar-powered water supply system for the relocation site situated in the poblacion area.

Logistical support for the realization of the project was provided by the Department of Social Welfare and Development (DSWD) in Region 6, Bottom-up Budgeting (BuB) program of the Department of the Interior and Local Government (DILG), and other agencies.

According to Guihulngan City Social Welfare and Development (CSWD) administrative assistant II Jacob Villahermosa, the 3.5-hectare site now houses most of the victims of the February 6, 2012 Magnitude 6.9 earthquake which struck the city.

The unfortunate incident triggered landslides in many parts of the city where more than a thousand of houses were totally destroyed,while more than 5,000 were partly damaged, killing 42, and injuring more than 100 residents.

Villahermosa says that the solar-powered water facility, which was constructed by Bacolod City-based R.U. Foundry and Machine Shop Corporation (RUFMSC), is now operational and started to benefit hundreds of the quake victims who are now staying at the relocation site.

The facility, which is composed of 34 Lorentz solar panels, a Lorentz submersible pump with state-of-the-art control system, main reservoir tank, a secondary tank, community tap stands, and ready-for-use water outlets, now supplies the water needs of those in the evacuation site.

Aside from providing potable water for the evacuees, water coming from the facility will soon be used to water the proposed community and individual vegetable gardens at the
relocation site where the harvest will be shared by the residents. 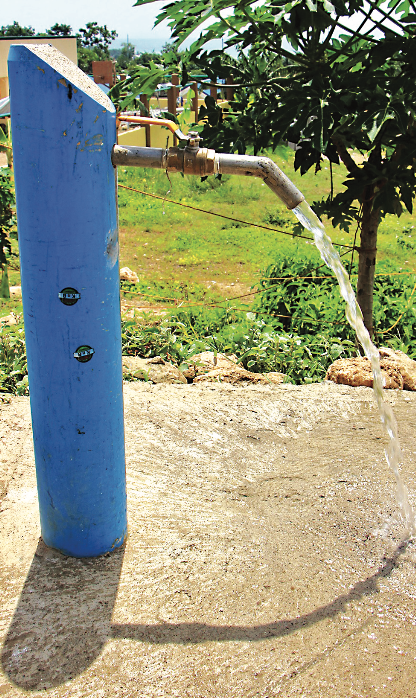 The solar-powered water facility also provides the water needs of those who are now housed at the Child and Youth Crisis Center of the DSWD, which was recently completed.

Beneficiaries of the soon-to-be completed Gawad Kalinga housing project at the relocation site are also expected to benefit from the said water supply system.

If not for the availability of the solar-powered water supply system, the water needs of those who were relocated at the site will remain a problem due to the scarcity of water supply in the area. Even the World Bank (WB) has emphasized the importance of having a solar pumping system in a community.

It says that a solar pumping system provides a better alternative to electric water pumps, which use diesel to fuel their systems.

After years of research and technological advances, a solar-powered facility has proven to be operationally, financially, and environmentally sustainable.

These factors have made solar water pumping an extremely viable way to expand energy access across developing countries and communities, while creating a strong resistance to shifts in rainfall caused by climate change or unreliable seasonal patterns.

“Even though solar water pumping is ready for mainstreaming and has started to take off in some parts of the world, its benefits remain largely unknown to communities, governments, and development institutions,” the WB said.

It was learned that the highest demand for solar pumping is within rural off-grid areas, currently undeserved, or served by costly fossil fuel-driven pumps.

Check these ‘sun-shield’ foods before bathing under the sun