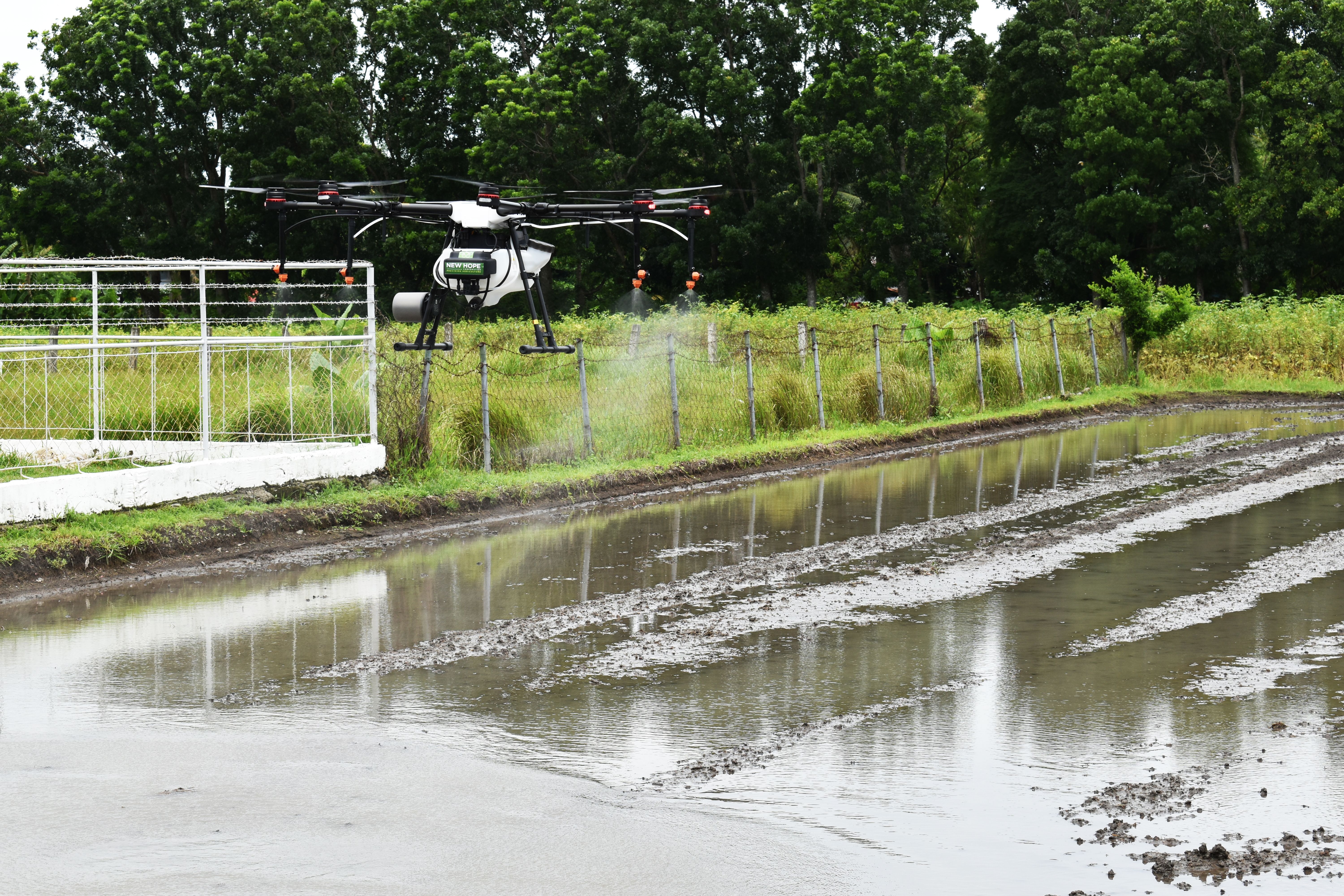 ILOILO CITY— To alleviate the impact of high farming cost, Philippine Rice Research Institute (PhilRice) demonstrated on Wednesday the use of agricultural drones in a 2,500 square meter-demo field at Western Visayas Integrated Agricultural Research Center (WESVIARC), Jaro, Iloilo City.
PhilRice, in partnership with DA WESVIARC, pushes the use of agricultural drones as seed spreader and liquid inputs sprayer such as foliar fertilizer, herbicides, molluscicides, insecticides, ect. to ease farmers’ woes of increasing manpower cost and scarcity of labor in Iloilo.
“We cannot lower the cost of production unless we mechanize,” said Jasper Tallada, the Rice Farm Modernization and Mechanization Program lead of PhilRice.
“Ngayon pa lang hinahanda na natin ang ating mga magsasaka upang mapababa nila ang gastos sa pagpapalay. We aim to improve the competitiveness of the rice farmers with the farmers from other ASEAN countries,” Tallada added.
PhilRice FutureRice program lead Roger Barroga said, “We partnered with the New Hope Corporation in demonstrating and promoting the use of latest precision and smart farming technologies in rice production in the Philippines.”
The FutureRice Program pilot-tested the use of precision drone seeder with 2 kilograms of seeds in a 1,390 square meter-lot in Nueva Ecija.
“We were able to produce 14 bags of palay which would mean that we can obtain 5.5 metric tons per hectare yield using 20 kilograms of seeds,” Barroga explained.
He emphasized the need to lower down the cost of production for the farmers to be competitive.
“Ang ganda ng seeds, halos one-inch ang spacing. Kung ano ang sukat ng inyong field, ang drone ang mag-iisip kung paano ikakalat mabuti ang seeds na maganda ang spacing at hindi patong-patong,” he added.
Seeds broadcasted by the drone were dispersed evenly which resulted in higher tilling rate, according to a PhilRice study.
On the other hand, using drone sprayer is as effective as using the power-knapsack sprayer in the manual spraying when applying pre-emergence herbicide.
According to Dindo Donaire, PhilRice weed scientist, the herbicide’s water dilution rate is reduced from 160 liters per hectare to 16 to 20 liters per hectare when farmers use a drone in spraying.
“Mabigat, maputik at masakit sa paa ng farmers ang mga kuhol kung knapsack sprayer ang ginagamit ninyo,” Donaire told.
Using drone sprayer, on the other hand, farmers will be less exposed to harmful chemicals, he added.
Both direct-seeding and herbicide spraying can be done in a 30 minutes per hectare rate in contrast to the manual operation that takes around 5 man-hours per hectare.
“It would be impractical for a single farmer to buy this agricultural drone unless you form an association and become a farm service provider,” said DA Western Visayas Regional Technical Director for Research Dr. Peter Sobrevega.
Just like the adoption of the rice combine harvester in Iloilo, Regional Technical Director for Operations Rene Famoso is optimistic that farmers here will be open to using drones in their seeding and spraying activities.
“We hope that with this technology, we can help address the problems of our farmers in the field,” he added.
On the other hand, Nehemia Caballong, PhilRice IT specialist, urged Ilonggo farmers to download smartphone applications like eDamuhan, Binhing Palay (BP) and AgriDoc apps for free via Google PlayStore.