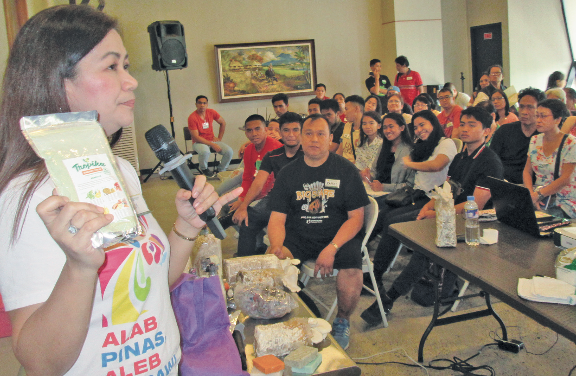 An enterprising nurse who worked for three years in the United States came back to the Philippines ten years ago so she could put up a social enterprise project that could benefit the less fortunate.

Sandy Montano, the nurse OFW, put up in Trece Martirez City in Cavite, a social enterprise school called CHEERS that stands for “Community, Health, Education, and Emergency Rescue Services.” As a special venture, she started in 2015 the production of vegetable flour from four locallyavailable raw materials known for their nutritional value.

Sandy was aware that many school kids are consuming a lot of junk [snack] foods which are not exactly good for their health. Not only school kids, but even adults are guilty of eating junk foods like instant noodles which are readily-available practically everywhere. 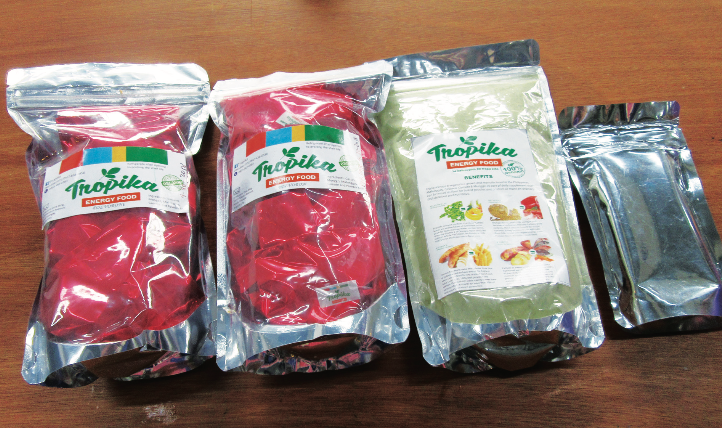 From left, 2 pouches of veggie flour polvoron, a pouch of Tropica flour, and a chocolate energy bar.

Sandy thought that Filipino children, as well as adults, deserve nutritionally-better meals, and that’s what motivated her to get into the production of her Tropica flour made of the four raw materials – camote, cassava, mungo, and malunggay, which she buys from Indigenous People from Botolan, Zambales. The Aetas grow the crops the natural farming way, not using any chemical pesticides. Sandy, by the way, is a member of the Natural Farmers Institute of the Philippines.

Usually, it takes 16 kilos of raw materials, costing from P160 to P180, to produce one kilo of vegetable flour. If sold, the flour could sell from P250 to P300 per kilo. But Sandy does not sell the 100 kilos of veggie flour that she produces every week. Instead, she uses the same to process value-added preparations like those mentioned above.

Aside from selling her products to school children, Sandy also accepts orders from the Department of Social Welfare and Development (DSWD) for ready-to-eat meals for victims of disasters and calamities in evacuation centers.

Of course, Sandy’s production of veggie flour is just a small fraction of the requirement nationwide. But that could be a beginning for bigger undertakings. The same can be undertaken in many other parts of the country so that more people will benefit. Of course, Sandy is doubly happy about what she has started to do because she is doing a big favor for the IPs, the Aetas, of Botolan, Zambales who have found a ready market for their farm produce.

The Natural Farmers Institute of the Philippines headed by Rene Pamintuan as chairman, and Alexander Pasia as president and general manager, can help accelerate the spread of the advocacy espoused by Montano. At this time, the group is busy planning for a Natural Farming Summit sometime next year. 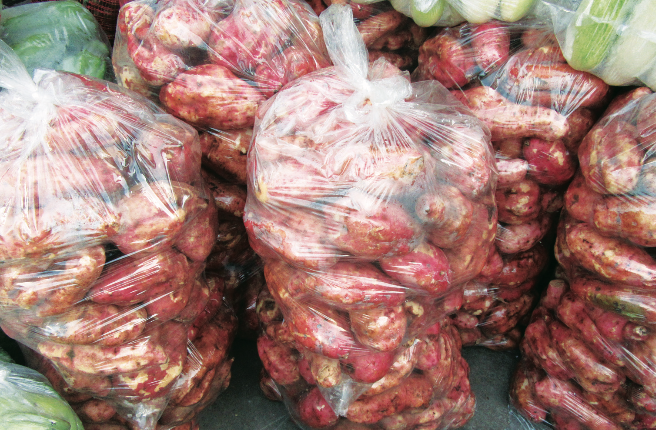 Among the raw materials of Tropica flour are mungo, camote, malunggay, and cassava.

Production and processing of naturally-farmed crops can open up new income opportunities in both the urban and rural areas. The urban area can be the site for processing value-added naturally-farmed products where the market with purchasing power is concentrated. Of course, the processing plants can also be situated in the countryside where the crops are grown.

By the way, naturally-grown products also include other commodities like meat, eggs, and dairy. In fact, Jacqueline Hassig Alleje, a member of the board of NFIP, is into a dairy-based project. The planned Natural Farming Summit can open up opportunities for all stakeholders that include farmers, investors, processors, traders, input suppliers, logistics providers, retailers, and consumers.

Do plants have feelings?