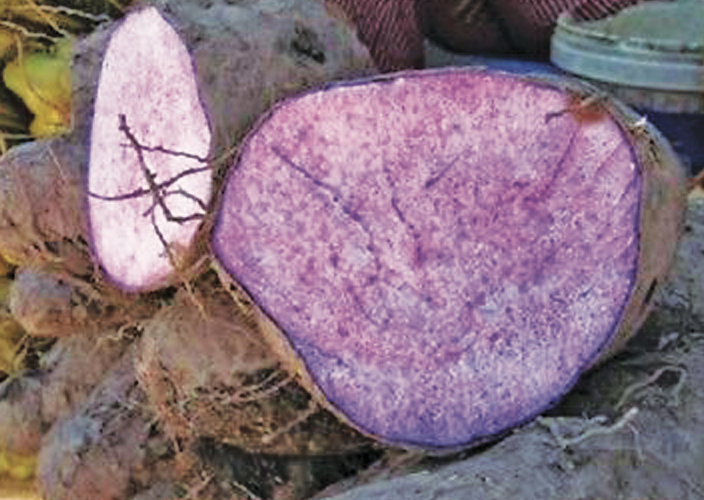 Ubi (Dioscorea alata L.) commonly known as yam, is one of the most important species under the genus Dioscorea with about 600 species, 150 of which are cultivated for food. Ubi is also called water yam, guyana arrowroot, greater tam, namede-agua, ten-months yam, white yam, or winged yam. It is ‘dashu’ or ‘shuyu’ in China, ‘ignamede chine’ in France, ‘khamatu’ in India, ‘daisho’ in Japan, ‘ubi kemali’ in Malaysia, ‘huabon’ in Thailand, and ‘khoaimo’ in Vietnam. In the Pacific Island of Ponape, yams are referred to as 2-, 4-, or 6-man yams, depending on how many men it takes to lift the tuber. Some have been accurately recorded up to 25 kilograms (kg) and 2 meters (m) in length.

Ubi may have been cultivated as early as 8,000 B.B. in Asia. It is probably native to China. It is now the most widely spread Dioscorea species throughout the world. In Africa, it is second to white yam in popularity. The other cultivated species under the genus are tugui or lesser yam (Dioscorea esculenta), potato yam (D. bulbifera), yellow yam (D. cayenensis), bitter yam (D. dumentorum), Chinese yam (D. opposite), and white yam (D. rotundata).

Ubi is a perennial climbing herb with flesh color ranging from white to red to deep purple. Stems have wings and twine to the right. D. bulbifera stems twine to the left. Tuber shape ranges from round to cylindrical, but can be highly irregular. Tuber flesh is “watery” in texture.

In the Philippines, it is usually grown in small patches of land, particularly in Ilocos, Southern Tagalog, Bicol, Central Visayas, and Northern Mindanao. Ubi production in the country reached 30,064 tons (t) in 2006 with Central Visayas producing the greatest volume of 21,849 t. Bohol accounts for 21,240 t of that volume. Production increased at an average rate of 2.5% yearly since 2000. Total production area was 6,001 hectares (ha) while the national average yield was only 5.01 t/ha in 2006.

The tuber is a main ingredient in ‘halayang ubi’ (ubi jam), a favorite dessert during fiestas and the holiday season. It is also cooked as a vegetable in ‘sinigang’ or ‘nilaga’ in the same manner as taro. It gives special taste, aroma, and color to ‘guinataan’. It is processed into powder, chips, and puree. Ubi is used as an ingredient in sweets and confectioneries.

The average crude protein content of ubi tubers is 7.4%. About 75% of the tuber dry matter is starch. Crude protein and starch contents vary significantly among cultivars. It is also a good source of vitamin C and minerals. Total oxalate levels in yam tubers range from 486 to 781 mg/100 grams (g) dry matter, 50-75% of which are in water-soluble form.

Ubi has been used as medicine for thousands of years. Diosgenin is a steroidal saponin, which is extracted from the root of wild yam. Dioscorin is the tuber storage protein of ubi. It is commonly used in traditional Chinese medicine to treat kidney and liver problems. Estrogens (sex hormones) were first made from a similar compound in ubi. Ubi was used commercially to produce hormones for contraceptive pills and steroids.

In addition to their properties, peels also contain antifungal compounds such as beta-silosterol which can be used to control ubi diseases. 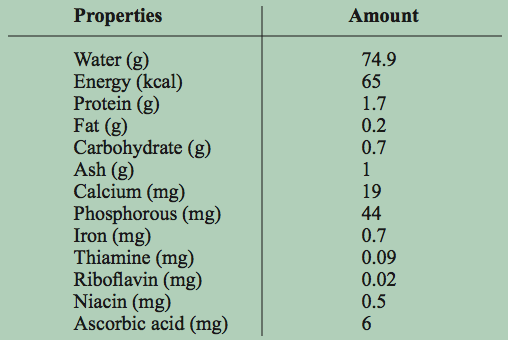 Varieties
There are only two purple ubi varieties recommended by the National Seed Industry Council (NSIC) namely, PSB VU-2 (Zambal) and PRA-35 (‘Kinampay’), which is more popular. However, there are local cultivars and strains. There are five types of ‘ubing kinampay’ namely, original ‘kinampay’ – with red-purple flesh, ‘kabus-ok’ – with white flesh and large tubers, ‘tamisan’ – with reddish-white flesh and sweet taste, ‘binanag’ – with creamy, white flesh and elongated tubers, and ‘binato’ – with big, hard tubers, and white flesh.

Another cultivar, ‘ubing kalamay’, is considered as the most palatable. It is extensively grown in Bohol which has sandy, lime-soaked soils suitable to this variety. It has deep purple flesh and extra large tubers.

Soil and Climate Requirements
Ubi can be grown in medium and low elevation areas, under open and partially shaded conditions. In high elevation areas, yields can be drastically reduced. Optimum temperatures range from 25OC to 30OC. It requires a well-drained area for planting. It grows well in all kinds of soils but clay loam soils, which are high in organic matter, are best.

Ubi is relatively drought-resistant, but at least 130 cm annual rainfall is needed. It requires ample moisture throughout its growing period, particularly during tuber bulking at 3-5 months after planting. Irrigation can be provided in areas where the dry season is longer than 3 or 4 months and falls within the bulking period of the plants.

Planting Materials
Ubi is propagated through setts, which is the upper part of the tuber nearest the stem. Setts should be taken from healthy tubers. Cut the setts into pieces containing 2-3 buds weighing 100-150g each, a few days before planting. Treat the cut portion with wood ash or with recommended fungicides to prevent fungal infection. After airdrying, setts are either pre-sprouted or planted directly. A hectare of ubi requires 2-41 t of setts.

Meristem culture is used in ubi to eliminate diseases. Other tissue culture techniques used routinely include in vitro micropropagation using single nodal cuttings and in vitro production of microtubers. However, initial yields from tissue culture plantlets and micro tubers are low.

Pre-sprouting of Setts
Pre-sprout setts to minimize maintenance cost especially in weeding. Setts have dormancy period of 3-12 weeks depending on the cultivar. In shaded areas, place setts side by side and group according to type. For setts cut from large tubers, the orientation is either skin up or crown sideways. Cover setts with a thin layer of river sand or compost and mulch. Water 2-3 times a week until all setts have produced sprouts. In general, whole setts and head setts sprout ahead of other sett types. Setts are ready for planting at four-leaf stage.

To break dormancy, use the gibberellin inhibitor that produced dwarfing in poinsettias such as chlormequat chloride. Soak tubers for 24 hours to shorten dormancy time from three months to one month.

Planting
Ubi is usually planted from March to May depending on the breaking of dormancy. However, it is best to plant during the start of the rainy season. Plant setts in ridges 1 m apart in hills 0.5-0.6m. Cover with top soil or compost to a depth of 15 cm. Nonsprouted setts can also be planted, but sprouting will be delayed for about 3-12 weeks because of dormancy. For small areas, it is best to plant the setts in mounds to facilitate harvesting.

Replanting
Some amount of sett mortality can be expected, especially when non-sprouted setts are used for planting. Replant about two months after planting.

Check hills with no sprouts for rotten setts which should be removed and replaced with new ones. Unsprouted setts without rot should not be replaced because they can still produce sprouts later.

Mulching
In order to conserve soil moisture and suppress weed growth, it is preferable to mulch ubi with available plant residues such as coconut fronds, corn stalks, rice straw, and grass clippings.

Weeding
Weeds are initially controlled to prevent competition for nutrients. Mulching up to 10 cm thickness can greatly reduce weeds. Weeding can be done at 1-2 months interval. This can be done manually, mechanically (with animal-drawn implements), or with the application of herbicides.

Hilling up
In the case of unmulched ridge seedbeds, rain and weeding operations may cause leveling down of ridges. Hill up the beds at least once, 2-3 months after planting to cover the growing tubers. Animal-drawn implements or grub hoe may be used in hilling up depending on the area.

Fertilization
A hectare of ubi with a yield of 35 t can remove about 128 kg N, 39 kg P2O5, and 195 kg K2O from the soil. This represents more or less its fertilizer requirements. However, fertilization should also be based on soil analysis. Compost or animal manure is mixed with the soil during land preparation or applied as basal fertilizer at the rate of 2-5 t/ha. Sidedress with manure or compost every two months up to the 6th months at the rate of 0.5 kg/hill.

Inorganic fertilizers such as 14-14-14 are applied at the rate of 6 bags/ha. The recommended amount is split into two, one-half applied one month after emergence and the other half applied two months after. The fertilizers is applied in bands about 10 cm from the stem and covered lightly with soil.

Trellising
Ubi yield tends to be higher with trellis. Plants are staked before vines elongate. Bamboo poles, wood, cassava stalks, talahib stalks, or any material that can support the ubi vines for at least seven months can be used as trellis. Set up cassava stalk in an inverted position (top portion buried) to prevent growth. There are various methods of staking. Three of the more popular ones are as follows:

Trellis method. This stake setup is not very stable and requires more materials to support the stakes (posts and the wire). However, weeding and hilling up operations using animal-drawn implements can be done easily.

Modified trellis method. With this method, ground spaces under the stake arch need not be weeded as the foliage becomes dense. Also, stakes formed in this manner provide stable support. However, weeding and hilling up operations that utilize animal drawn implements cannot be done under the arches.

Pest Management
The most serious disease of ubi is anthracnose (Colletotrichum gloeosporioides). Plants can be sprayed with recommended fungicides or with a compost tea as a preventive measure. Compost tea is prepared by soaking ½ sack (15 kg) of mature compost in ¾ drum (200-L capacity) of water for 5-7 days. Dilute the tea to 20 parts water and spray on the plants.

Avoid using tubers infested with nematodes as planting materials. The symptoms of root knot caused by the root-knot nematode (Meloidogyne incognita) include bumps and excess hairiness that are not typical of the cultivar. Dipping the infested tubers in hot water at 50O-55OC for 40 minutes can suppress the nematode without adverse effect on the storage life, germination, growth, and yield of the tubers. The use of animal manure can suppress nematode build up, thereby resulting in high yield.

Harvesting
Ubi is ready for harvest when the foliage turns yellow and dries up around 10-11 months from planting. Harvesting is usually done from late November to February of the following year. Harvesting can also be done at 6-7 months after planting to take advantage of good market price. Tubers intended for setts can be harvested later. Potential yield of ubi ranges from 20 to 58 t/ha.

It is easier to harvest ubi that are planted in mounds. Loosen the soil around the tuber with a bolo, shovel, or spading fork. Lift, clean, and cut the tubers near the base. Injury to the tubers should be avoided to prolong storage life.

Postharvest Handling and Storage
Sort, clean, and arrange tubers in a single layer with rice straw or banana leaf partition between rows to prevent injury. Cover with appropriate materials such as banana leaves, coconut fronds, or rice straw to minimize weight loss.

Select planting materials for the next planting season. Store tubers in a well-ventilated area and keep dry. Separate blemished or damaged tubers and treat with wood ash to prevent fungal infection.

Ubi can be stored for three months in a raised platform three feet from the ground. Place the tubers in a single layer horizontally on the platform. Another method of storing tubers is to bury them in a ditch covered with soil followed by coconut leaves on top. To prevent rodents and other pests from attacking the stored tubers, securely fence the barns or storage areas or use traps and baits.

Ubi can also be kept in cold storage. Keep them on shelves in rows at 12OC-16OC and 70-80% relative humidity. Tubers can be stored 6-7 months under this condition.

Marketing
Ubi farmers usually sell their produce to retailers, wholesalers, and end-users in the farm, road sides, and public markets. Large-scale farmers enter into contract farming to ensure ready market for their produce.