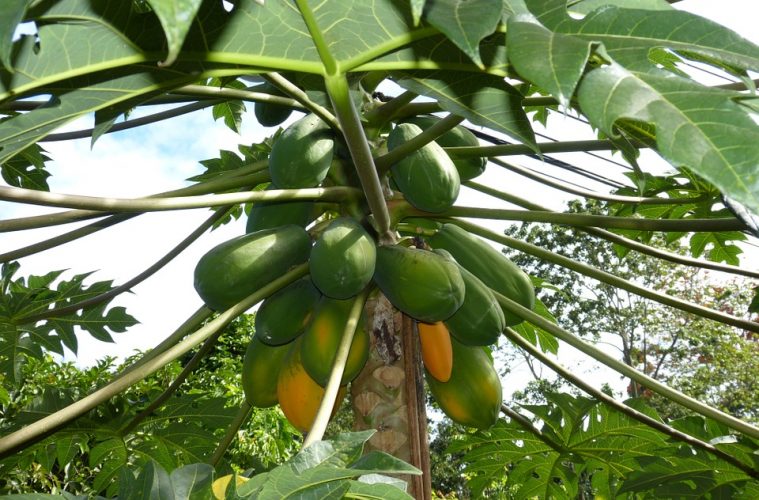 Papaya is a tropical tree which is commonly known for its long, lobbed leaves, and large fruits which are filled with tiny black seeds.

A papaya plant thrives well in hot weather conditions and grows in any part of tropical countries like the Philippines, and often propagated by seeds.

However, sowing the black seeds of the papaya fruit is not a guarantee for the farmers to attain a good yield, primarily because some of the seeds may turn out to become a male papaya tree which will not bear fruits, thus, wasting the time and effort of the poor farmer. 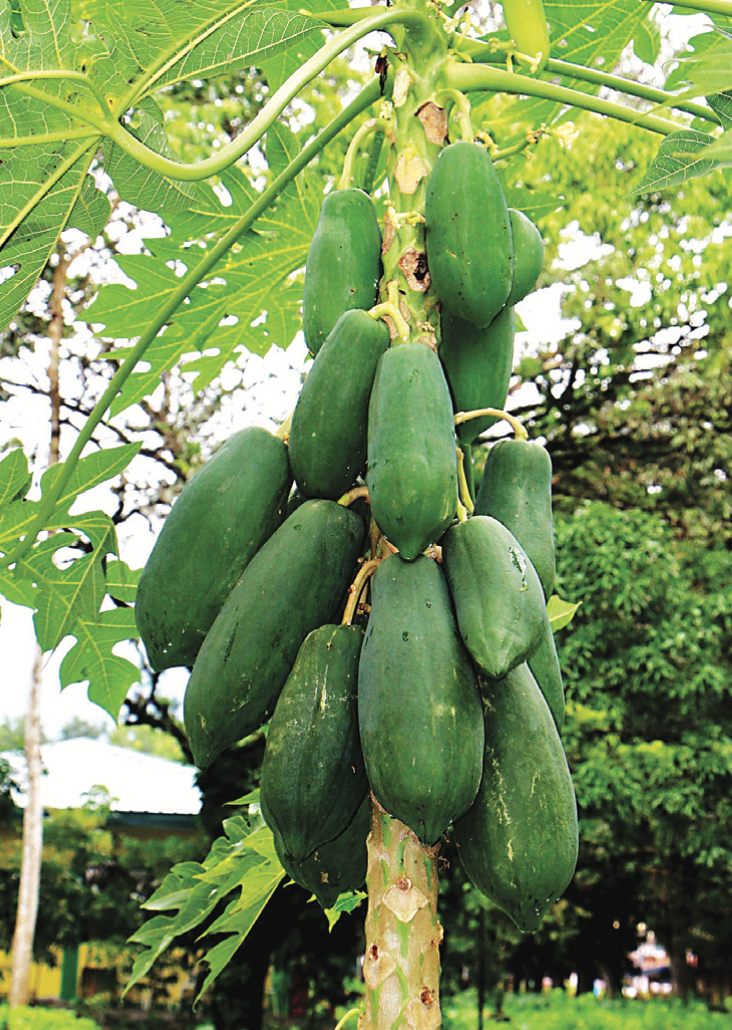 Marcotted papaya grows faster and produces fruits earlier than those grown from seeds.

To address this badgering concern which greatly affects the farmers, particularly the marginalized farmers living in the countryside, the Central Philippines State University (CPSU) in Kabankalan City, Negros Occidental, under the leadership of its newly-elected president, Dr. Aladino C. Moraca, Ph.D, developed and introduced the “Process of Papaya Asexual Propagation Through Marcotting.”

According to Moraca, this utility model generally relates to propagating papaya through marcotting.

It can be noted that a utility model is an exclusive right granted for the particular invention, which allows the right holder to prevent others from commercially using the protected invention, without his or her authorization.

Marcotting, which is a type of vegetative plant propagation, is commonly known as air layering that involves rooting of a part of the stem while it is still attached to the parent plant.

In marcotting, the induction of root development is usually done by slitting the part of a plant to be rooted. 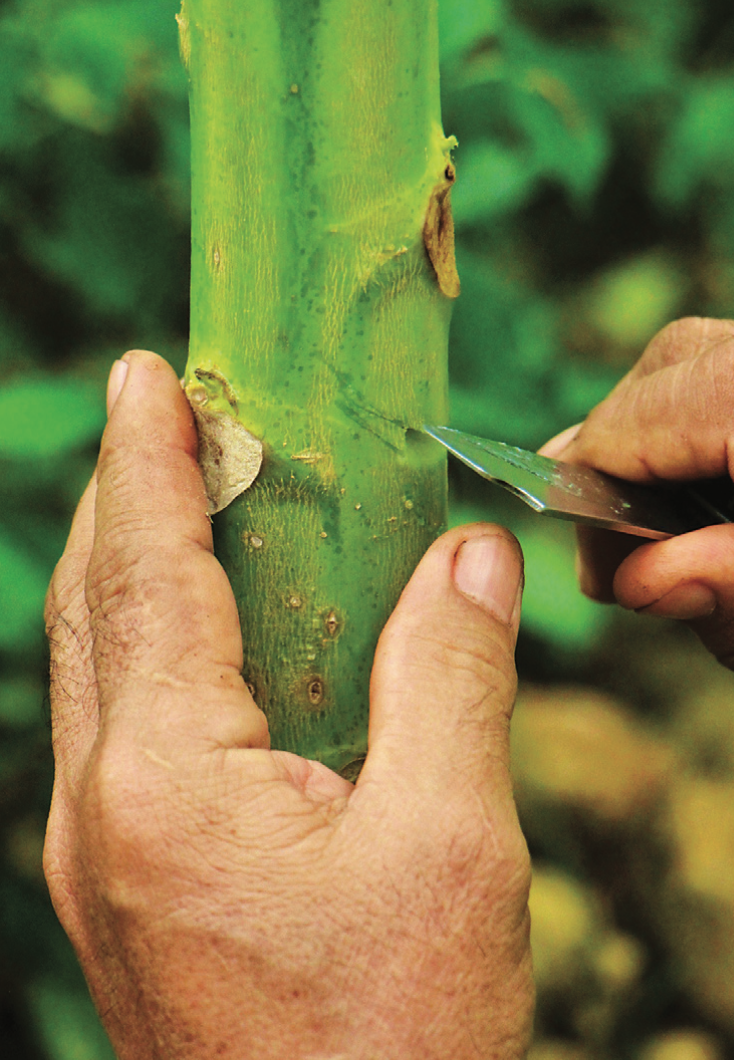 The ideal slitting of a papaya plant for marcotting.

Moraca says that this technology is very practical and can be very appropriate for the production of papaya, which is called the “CPSU Pink Variety.”

“There is a need to introduce a new process of propagating papaya asexually utilizing the marcotting in order to produce papaya that will guarantee the farmers to have a better yield,” Moraca pointed out.

The primary objective of the utility model is to provide a process of papaya asexual propagation where the grafted papaya tree will have a superior fruiting performance.

The utility model aims to provide a process of papaya asexual propagation using the marcotting method in order for the plant to grow faster and produce fruits earlier than the conventional practice of cultivating papaya through the use of seeds.

Moraca says this will greatly help the small farmers to save their modest but hard-earned resources in terms of investments on acquiring expensive seeds, thus, encouraging the marginalized farmers to engage in the production of papaya by using the marcotting process developed by the CPSU.

Aside from directly benefitting the farmers, this utility model can also be utilized by those living in the urbanized areas where the space to propagate a plant is a perennial problem because a marcotted papaya tree can be grown in small containers like discarded pails or appropriate pots.

While the practice of marcotting has already been used to propagate different varieties of plants and trees, such as black pepper, cacao, cashew, citrus, grapes, coffee, guava, jackfruit, lanzones, tamarind, and many others, marcotting a papaya tree in the country is little known to the local farmers until the process was developed by the CPSU for local adoption. 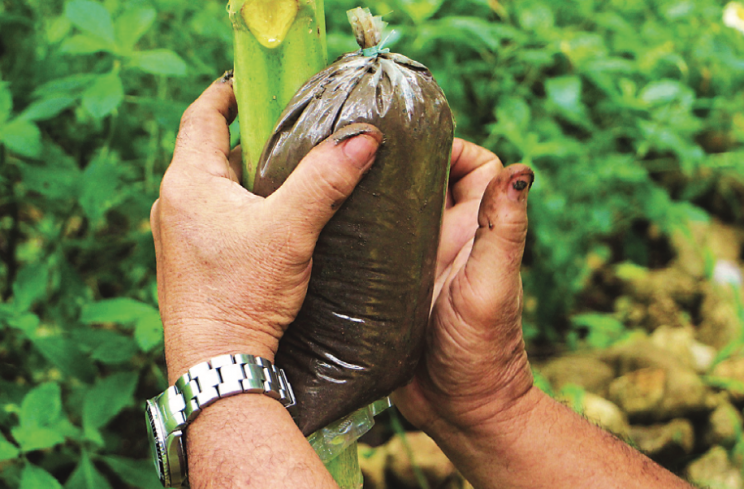 The recommended rooting medium for papaya marcotting is a mixture of slightly moistened vermicompost (30 percent) and decomposed sawdust or cocodust (70 percent).

Under plant and shoot selection, a papaya plant with abundant leaves should be chosen as an ideal material for marcotting.

The rooting medium which is highly recommended for papaya marcotting should be a mixture of slightly moistened vermicompost (30 percent) and decomposed sawdust or cocodust (70 percent).

Watering is a vital part of marcotting papaya, which should be done regularly with an interval of 2 to 3 days until reaching the period of one-month by using a syringe.

This is to maintain the moisture content of the rooting medium.

When plenty of roots have already developed after 10 to 15 days after marcotting, the marcotted papaya can then be severed from the parent plant and transferred to a pot or planting site.

With the marcotting process developed by the CPSU, it is expected to boost the papaya production in the country, thereby helping to fill the rising demand of thelocal and international markets.

Following this development, Moraca says the CPSU, which is dubbed “the first agricultural institution in the country,” is committed to provide the appropriate technology and skills training for the productive, decent, and gainful living of the students and stakeholders.

He says the CPSU is also mandated to engage in the conduct of quality research, instruction, production and extension programs that are responsive to the local and global challenges and demands.