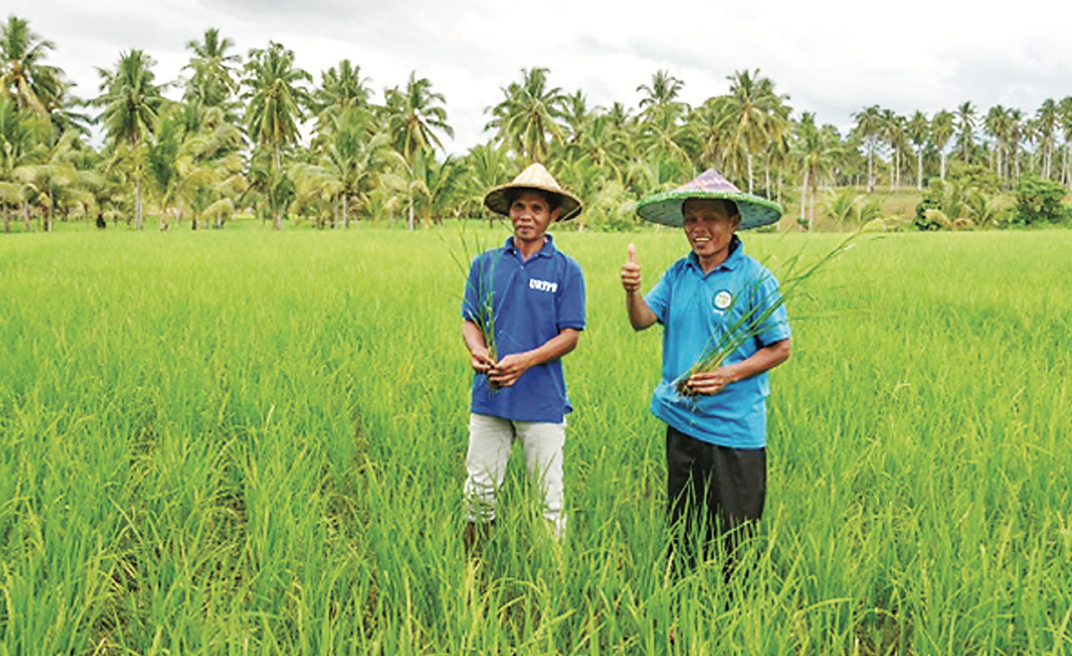 They were called upon to defend the camp, their bastion of political and arm struggle. And then they found themselves in the field, fighting for their lives, and for their people. 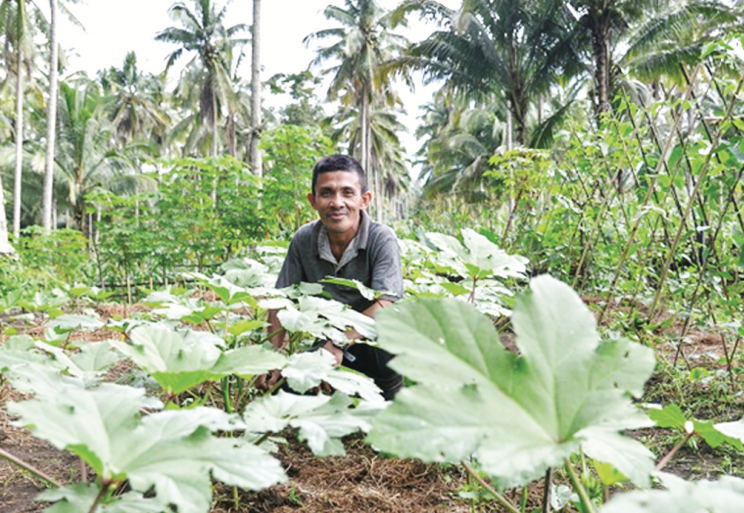 Norodin Dimasangkay in his farm in the province of Maguindanao. He and other three farmers participated in the Upland Rice-based Farming Technology Transfer Program for the Bangsamoro (URTPB), organized by various government and private agencies.

“We didn’t have a choice. We had to fight for the Bangsamoro people,” recalls Norodin.

In 2016, sixteen years after the crossfire, they found themselves in a completely different training.

Agriculture is one of the driving forces included in the master plan to bring lasting peace and development in ARMM. The said master plan was initiated after the signing of Framework Agreement of Bangsamoro (FAB) in 2012.

Through this project, the three former combatants met their farming mentors, Bandao Bansilan Jr. and Abdulradzak Makakua – both graduates of BS Agriculture from USM, who were employed by PhilRice Midsayap as Agriculture Development Officers (ADOs) to teach and encourage farmers to adopt various integrated crop management systems.

“We grew up at Camp Abubakar. We know their struggle,” Bandao says. “Their pain is also our pain.”

Camp Abubakar is the connection that binds the farmers and ADOs, a hook that links their struggles and collective aspiration, and that is, to attain peace in their homeland.

“Which is why I think the farmers and us are compatible,” Abdulradzak says.

The ADOs spent eight months training the former combatants on-site, utilizing the Farmers’ Field School (FFS) approach. Every week, the ADOs together with the municipal agriculturists and agricultural technologists of DAF-ARMM, met the farmers at FSS sites and discussed PalayCheck System for upland rice production and vegetable cultivation for three to four hours with field practicum.

While Saidona, Alijam, and Norodin have been farming since they were young, it was the first time that they were introduced to new farming practices.

“Our ancestors told us that we can only plant for one cropping season. When you plant during off season, you will fail,” Saidona shares.

His longstanding belief changed when he saw how rice varieties thrived, even during the off-season, in the demonstration farms. 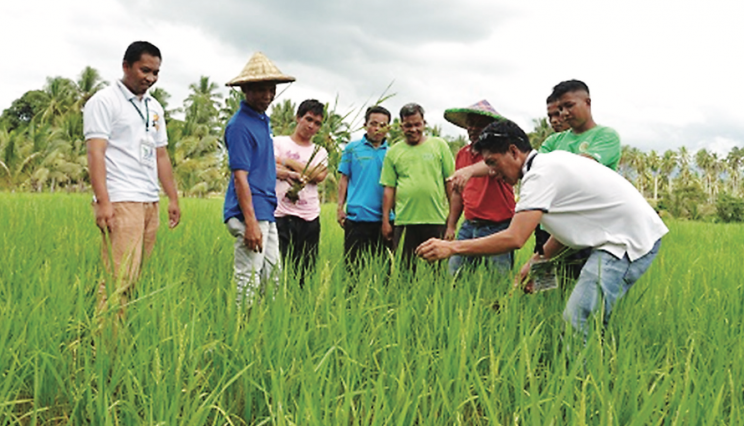 Alijam, after joining the FFS, was convinced to plant rice in his 3-hectare (ha) farm after planting corn for many years.

The ADOs introduced the farmers to modern varieties that could survive in their areas such as NSIC Rc 11, Rc 282, and Rc 288. According to PhilRice, Rc 282 and Rc 288, the varieties suitable for rainfed environment, could yield up to 6 tons (t)/ha. Rc 11, a variety suitable for upland environment, has a maximum yield of 4t/ha.

“At model farms, we planted these modern varieties along with their high-yielding traditional varieties like Dinorado and Kapukao so the farmers could compare the performances of each variety,” the ADOs explain.

The farmers said that they used to harvest 25-30 sacks in a hectare. With the new knowledge and the use of modern technology, their harvest doubled, with 40-50 sacks per hectare.

“We used to bring guns to protect ourselves, now, we’re using shovels,” Norodin says in jest.

His only enemies today are the snakes in the field. Rice black bugs and the tungro virus are also perennial problems in the farms, particularly in Maguindanao, and North Cotabato.

As a defense system to fight pests and diseases, the ADOs convinced them to follow synchronous planting in their respective municipalities.

“We talked to the Sultanate in their area and he convinced the farmers to follow a planting schedule to prevent the chances of pest incidence,” the ADOs say.

On March 8, 2017 at Camp Darapanan in Sultan Kudarat, Maguidanao, Saidona, Alijam, and Norodin graduated from FFS, together with more than 300 farmers from Maguindanao, and Lanao del Sur. 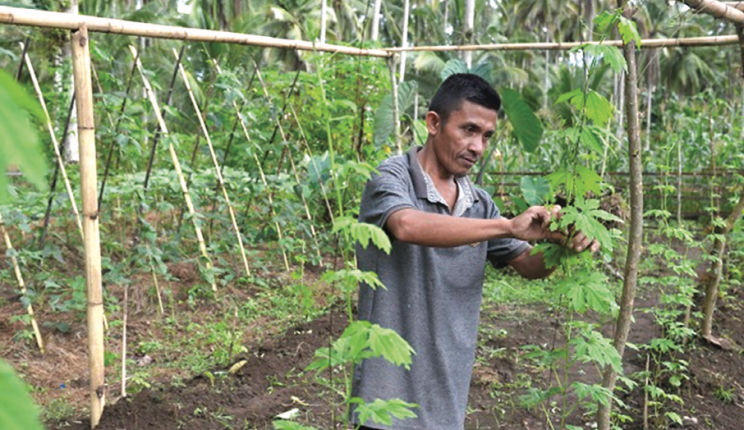 Dimasangkay was chosen as a Farmer-Extension Worker (FEW) to conduct a non-formal Farmers’ Field School approach to fellow farmers in his community.

The program continued after FFS to make sure that the initiative will ripple.
“From the graduates of FFS, we chose religious leaders as our Farmer-Extension Workers (FEW) to conduct a non-formal FFS to his chosen farmers in his community,” says Dr. Sailila E. Abdula, PhilRice Executive Director and over-all lead of the project.

Norodin was one of the 12 chosen FEWs who conducted his own non-formal FFS. As an Ulama or religious leader, he cascaded his learnings from the first FFS to his fellow farmers. He met the 10 participants twice or thrice a month and taught them to adopt the innovations on rice and vegetable farming.

“Ulamas are suitable partners in agricultural development as they are well-respected in the community,” Abdula reveals.

The program also gave Norodin an opportunity to participate in a study tour in Northern and Central Luzon. Together with 11 FEWs, he exchanged knowledge with his fellow farmers from Ilocos Norte.

“That’s when I discovered that the Ilocano farmers are way ahead of us in terms of farming,” Norodin shares.

But while farming is not a competition, Norodin continued training his fellow farmers in his community. With the help of ADOs, Norodin established his own Upland Palayamanan Model Farm where farmers learn the latest technologies in rice farming and vegetable cultivation through hands-on training.

“We’re now on the process of analyzing the data of our survey on the adoption of technologies,” he says.

About 200 farmers from Marawi participated in a training program conducted by PhilRice in partnership with JICA. They received quality rice seeds, fertilizers, and garden tools so they could plant again. Farming in Marawi was put on hiatus for almost a year due to the siege.

Abdula added that PhilRice has also given interventions to communities affected by the Marawi crisis. Farming in Marawi was put in hiatus for almost a year, displacing some of the farmers away from their farms, due to the siege.

In a published report titled “The State of Food Security and Nutrition in the World” by the Food and Agriculture Organization (FAO), conflicts were reported as the main driver of population displacement.

“On the average, 56% of the population in countries affected by conflict live in rural areas, where livelihoods largely depend on agriculture,” the report said.

“Through our partnership with JICA, we conducted follow-up training and briefings and provided quality rice seeds, fertilizers, and garden tools to about 200 farmers to help them plant again,” Abdula says.

Wars are unpredictable. It is difficult for farmers to pursue farming full time due to conflicts, leaving their crops and home behind for their own safety.

Bakwit is a local term that pertains to the people displaced by war or the act of “evacuating.”

According to FAO’s report, “conflict negatively affects almost every aspect of agriculture and food systems – from production, harvesting, processing, and transport, to input supply, financing, and marketing.”

For Saidona, Alijam, and Norodin, they would rather farm than fight or risk their lives in a long battle where nobody wins.

“By cultivating their farms, agriculture has helped them reclaim their land, but in a productive and peaceful manner,” Abdula concludes.