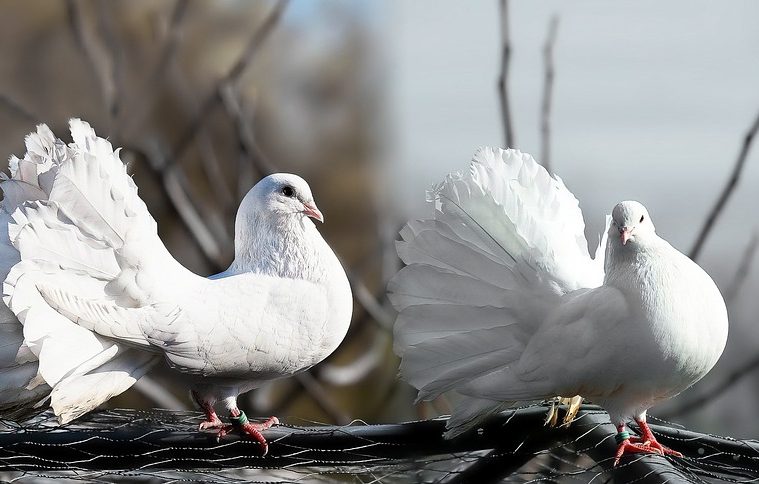 The pigeon (Columba livia) is the oldest domesticated bird originating from the Middle East about 10,000 years ago. Known for their homing instinct (ability of a bird to return to its origin when brought to a distant place as far as 1,000 kilometers away), pigeons have been used for carrying messages before modern communication systems came about and are still used today for sport racing. Utility pigeons, on the other hand, are raised for squab meat as “specialty food.”

Squabs are young pigeons that are 26-30 days of age from hatching. The adult pigeons that mature sexually at six months pair and mate for life (yes, they are monogamous). A female lays two eggs per brooding cycle which are incubated by both parents for 17 days. The squabs are fed by their parents with “crop milk” which is pre-digested liquid food regurgitated by the adults into the mouths of the young for 3-5 days before they can feed on their own. The breeding pair can produce 12-16 squabs in ayear. The pigeons are fed mainly with grains such as wheat, sorghum and corn and are productive up to seven years.

Squab meat (dressed) is highly-priced locally at P360 per kilo. When prepared into delectable dishes (e.g., Crispy Fried Pigeon) in first class Chinese restaurants, the price per bird can range from P600-P1,200. Squab meat is tender, moist and richer in taste compared to chicken meat. It is also dark, very lean and easily digestible. It can be roasted, grilled, and seared with lesser time to cook than other poultry meats. 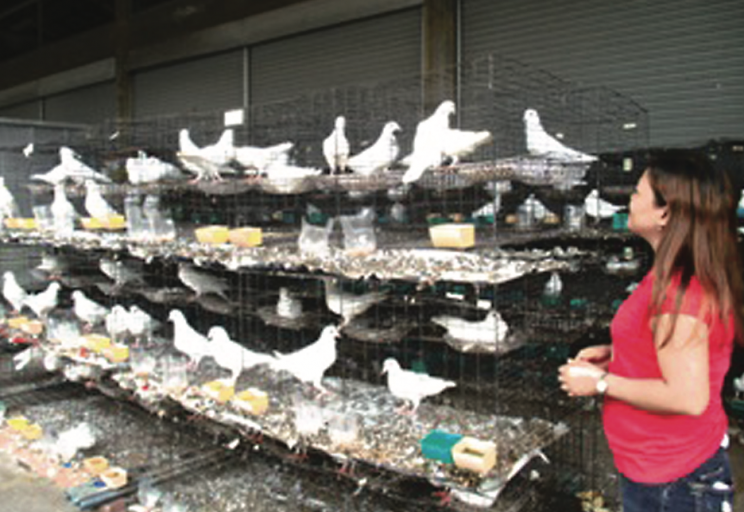 We recently visited the utility pigeon production facility of Bio Research, a leading pet superstore in Paraňaque City, to know more about utility pigeons and their potential for economic benefits. Production manager Allen Lee told us that there is a big demand for pigeon squabs in the country and imports are made to fill the lack of supply. In Australia, where squab production is a major industry, farmers are exporting as much as 10,000 birds per week to Hong Kong.

Raising utility pigeons requires lesser space and cost than raising chickens, according to Allen. A pair of pigeons only needs 1.5 x 2 feet of space while that for chickens is 3 x 3 feet. An adult chicken consumes 113 grams and half a liter of water per day, while an adult pigeon only needs 42 grams offeed and 36 milliliters of water per day. At harvest, the market price of dressed chicken is 125 pesos per kilo compared to 350 pesos per kilo for dressed pigeon after 42 days and 21 days of culture, respectively.

Allen says that raising utility pigeons can be done in urban areas where raising chickens commercially may not be allowed because of environmental regulations. Pigeon manure is not as odorous as that of chicken and pigeons do not make as much noise as chickens.

Bio Research has the “White King”, an American breed of large white pigeon that has been developed through selective breeding to be prolific, full-breasted, and suitable for confinement. A pair of ready-to-breed birds sells for P6,000. An urban farmer can avail of the utility pigeon growing module of the company consisting of 12 pairs of mature pigeons with separate cages for the price of P75,000 along with free technical assistance. The cost of investment can be recovered in a year, says Allen.