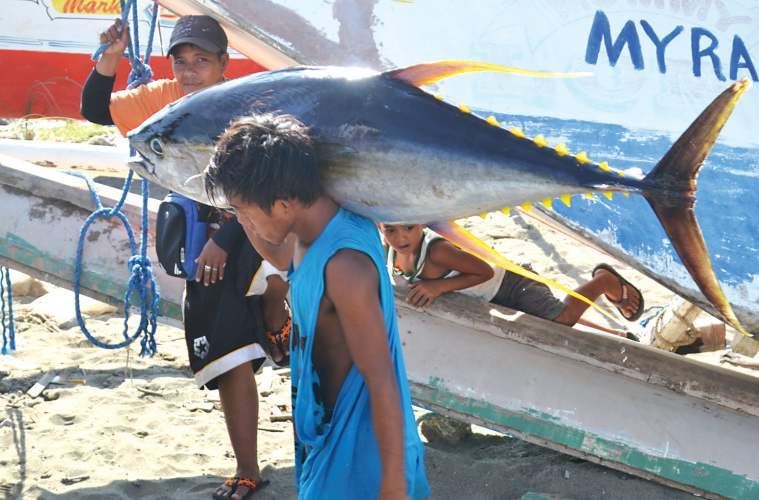 Mamburao, Occidental Mindoro: Emerging as the new “Tuna Capital of the Philippines”

The name Mamburao, the capital of Western Mindoro, came from “May bulao!”, an expression of the Mangyan, the indigenous inhabitants of the island of Mindoro, which means “There’s gold!”

These aborigines usually exclaimed this phrase in the olden days whenever they found gold nuggets on the sandy riverbank near their settlement at the edge of a mighty river. Lowlanders from mainland Luzon and the Visayas who first settled at the edge of the Maybulao River also called their village by that name. Years later, the name became Mamburao.

Now, the golden name of the ancient Mangyan village near the mouth of the river along the Mindoro Strait has been replaced by another yellow color – the yellow fin tuna—that abounds along the fish-rich channel. 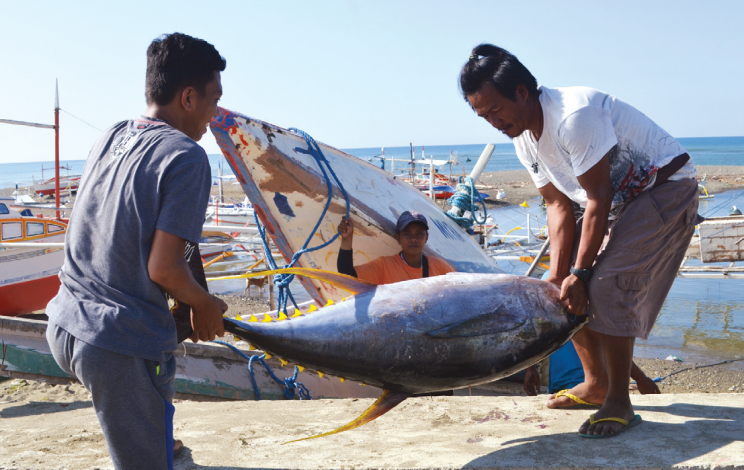 The placid Mindoro Strait is one of the narrow channels connecting the West Philippine Sea with Sulu Sea in the Deep South. The 420-meter deep (1,378 feet) waterway is part of an alternate route for cargo ships passing between the Indian and Pacific Oceans.

For artisanal (hand line) fishermen of Occidental Mindoro though, the strait serves as an underwater freeway for a much sought after premium marine delicacy. Just below the lumbering cargo vessels is Western Philippines’ “tuna highway,” a migratory pelagic pathway of yellow fin tuna (Thunnus albacores) where this hefty, torpedo-shape passes by from the cold waters of the North to the warm waters of the South and make a stopover on the Strait to spawn and forage off the coast of Occidental Mindoro.

This warm-bloodied fish, which makes its warm muscles extremely strong, could outpace the lagging freighters above them at a top speed of 60 kilometers per hour (32 knots). The yellow fin tuna, which has dark, metallic blue back and silver belly, has bright yellow second dorsal fin, thus its name. It is the top predator in the marine food chain, thus maintaining a balance in the ocean environment.

Tuna, which could grow up to more than 100 kilograms, often travel in schools of similarly-sized companions. Aside from galunggong (round scad) and squid, which abound in the Strait, they feed in large number so fishermen catch them easily and brought back to shore in a matter of hours.

Catching YFT in Occidental Mindoro is done by hand line (kawil) using a single hook-and-line method and involves the use of drop-stone technique. A single, baited hook is attached to a stone by a self-releasing knot and then released into the depth of the sea. Once the bait reaches the targeted fishing zone of 100-200 meters deep, the stone is detached from the line with a strong pull by the fisherman, releasing the baited hook that attracts tuna.

Peak season for YFT fishing is November, April, and then October where spic-and-span tuna landing stations, called a casa, in Mamburao and Sablayan, another major tuna fishing town two hours south of Mamburao, are busy processing freshly caught tuna. At the sanitized casa, each fish, after its rinsing, is stabbed at the back by a thin, 18-inch sashebo stainless steel tube to grade its quality. Only those with pinkish, translucent meat are exported. The big fish are then loaded in frigid reefer vans and loaded to a roll on-roll off ferry bound for Batangas, from there they are brought to tuna exporters in Parañaque. 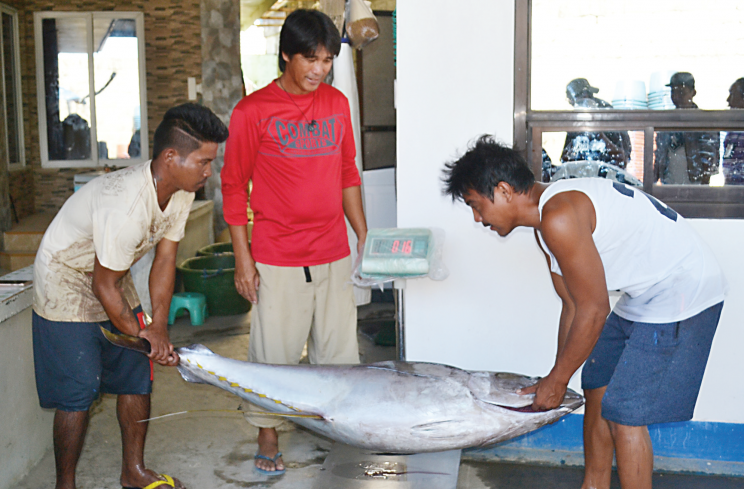 Artisanal or hardline fishermen of yellow fin tuna in Mamburao, Occidental Mindoro, weigh in their fresh harvest caught from Mindoro Strait that lies between the island provinces of Mindoro and Palawan. Ricky Pantoja (center), 49, owner of Ricky Fish Casa and chairman of Samahan ng Maliliit Na Mangingisda ng Mamburao, supervises the weighing in.

After weighing the tuna at the casa and its meat classified, the fish temperature is taken by a digital probe thermometer that is stuck on its back. The fish’s temperature must not exceed 4 degrees Celsius. Prior to storing the tuna in a 30-fish capacity chilling tank with a 0-degree Celsius temperature, a plastic color-coded traceability tag is tagged for accountability.

The traceability tag and fish control certification assure consumers from “sea-to-cook” that the sashimi and sushi they are eating are fresh and caught by hand line.

Starting in 2010, Mamburao’s tuna was being exported to the European Union member countries because it conformed to international standards for exporting tuna. Due to continued environmental degradation of Philippine waters, it depleted the local fish species. This is the reason why tuna sustainability is an important issue today.

Sustainable tuna fishing is selective and helps preserve marine species by using different methods of capture. In the Philippines, fishermen are encouraged by the World Wildlife Philippines to use artisanal or pole-and-line fishing, instead of using large, industrial nets that will inevitably capture and kill a lot of marine life that are not tuna.

In 2011, the local government unit of Mamburao partnered with World Wildlife Fund (WWF) for Nature, which aims to conserve nature and ecological processes by preserving biodiversity, and ensuring sustainable use of natural resources, for a special project called Partnership Program towards Sustainable Tuna (PPTST). The project involving the municipal agriculture office of Mamburao, which registers an annual 500 metric tons of catch annually, the private sector, other NGOs, and the fisher folk, the PPTST designed to propagate the proper handling and catching tuna to sustain the supply of tuna in the area.

The PPTST encourage local fishermen to use hand line fishing or kawil system, instead of commercial fishing methods, which are destructive for the fish species and the marine environment. Funding for the project came mostly from the German Investment Development Fund, an international funding agency.

Importers from European and Asian countries are said to prefer tuna fished through hand line methods because it maintains the intactness of the flesh as well as maintain its excellent fresh taste.

Today, most of the tuna being exported by the Philippines to Japan, Korea, and Australia, to as far as the European Union countries like Switzerland, Germany, and the United Kingdom, come mostly from Mamburao and Sablayan.

The tuna industry has long been considered as one of the backbones of Occidental Mindoro’s economy. Aside from tourism and agriculture products, the western half of Mindoro is rich and blessed with yellow fin tuna that continuously cruise along the Mindoro Strait giving a relatively strong food basin for both small and big tuna hand line fishers, that member countries of EU were enthralled to take a piece of Occidental Mindoro’s pelagic gem.

“The only problem now here is that tuna poachers from as far away as Infanta in the Pacific coast of Quezon, Cavite, Batangas, and Zambales, fish in the Strait unrestricted by the local government,” complains Ricky Pantoja, barangay chairman of Barangay 7, a seaside village where freshly caught tuna are offloaded in its tuna landing stations. “The Mamburao LGU must issue strict rules against these poachers who compete in our catch within our 15-kilometer municipal waters,” says the chairman of Samahan ng mga Maliliit na Mangingisda (Association of Commercial Small-Scale Fishermen).

Pantoja and another casa owner, Nonoy Fulgencio, are the only accredited by the Bureau of Fisheries and Aquatic Resources (BFAR) to deliver tuna to exporters in Parañaque.

“Next year, tuna sports fishing will be held in Mamburao, to be participated by sports fishermen from Manila,” declares Berny Castillano, a tuna boat operator who is a high school teacher by profession. “We’ll invite members of the Manila Yatch Club to fish here in Mamburao to promote recreational fishing tourism,” adds the president of the Occidental Mindoro Federation of Tuna Fishers Association. “I’ve talked with DOT Secretary [Berna] Puyat who planned to hold it next year.”

Now that Mamburao is tagged by WWF-Philippines as the “emerging new tuna capital of the Philippines,” the gold nuggets of yore found on the riverbanks have been replaced by the golden dorsal fins of tuna that would soon boost the local economy of the population of the laid back capital. This would be complemented by the opening of the 24-kilometer remaining gap of the island’s 600-km circumferential highway that would link Oriental and Occidental Mindoro and open the floodgates of tourism into the obscure Western half of Mindoro and make its abundant eco-tourism destinations be known worldwide and feast on the freshest sashimi in this part of the world.