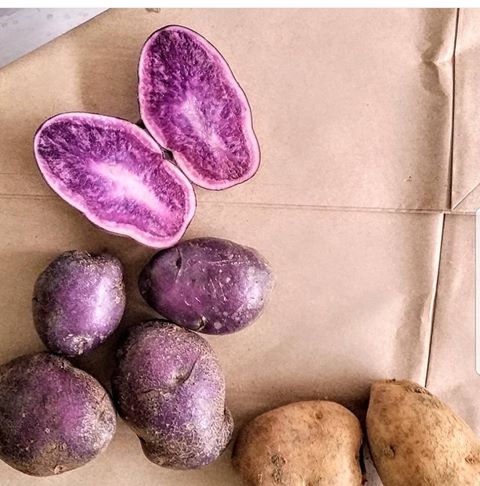 When it comes to potatoes, people are used to seeing the typical brown on the outside, yellow on the inside varieties that take on various shapes and sizes.

A farm in Atok, Benguet, however, has another variety that is eye-catching because of its unusual color: blue.

“Blue potatoes are not the usual potatoes that we see. From its name, it is colored blue both inside and outside,” said Edward S. Haight, a farmer and Chairman of the Benguet Sisterhood Park.

The potato variety originated from South America then later on spread to other parts of the continent along with North America.

“It was through my sister’s initiative that got us started in dealing with blue potatoes. She sent some seeds because she wanted us to have a taste of it. However, I planted it to make it grow and produce more of it,” Haight said.

Blue potatoes, also known as “Adirondack Blue,” are not genetically modified as many would instantly assume. The potato variety is natural and known to contain large amounts of anthocyanins which are compounds that possess antioxidants. Anthocyanins are also responsible for the potatoes blue pigment.

Aside from the usual health benefits of potatoes, blue potatoes contain antioxidants that help reduce the risk of cardiovascular diseases, stroke, and even cancer. It also has a high potassium content as well as a moderate amount of dietary fiber.

Despite its color, it can be cooked in many different ways like mashed, boiled, fried, and more just like the common potato.

Additionally, Haight said that the process of growing blue potatoes doesn’t differ from growing the varieties that many people are used to.

“First, store the potato seeds for four to five months. Then, when it starts to sprout plant it directly to the soil,” he said.

Like with other vegetables, Haight added that the potatoes have to be maintained by giving it enough water, fertilizer and insecticides or fungicides to keep it pest and disease-free.

It takes three to four months before the potatoes can finally be harvested.

However, according to Haight, blue potatoes can’t grow in the lowlands because of the warm weather.

“These crops need cold weather for it to grow well. The Province of Benguet is a good place to grow vegetables because it is blessed with good soil and cold weather which are the factors needed to grow high value crops,” he said.

Haight Farm is a family farm originally established after the First World War by a US soldier named Fracklen Guy Haight, also known as Guy Haight, who decided to stay in Sayangan, Atok, Benguet after getting attached to the place during their stay.

He saw that the place has good soil and climate which opened the opportunity for him to venture into farming.

After marrying Susi Haight, a resident of Atok, the couple planted crops such as potatoes, turnips, strawberries and more. They also introduced farming their his family and to the residents of the area as well.

Currently, Haight farm is now being managed by the family’s fourth generation who continues to advocate the importance of farming. .

“Farming is not an easy job and farmers should not be looked down at. We should put in mind that without the farmers, we will not have food to eat. Without their diligence and patience, we might not have any food to eat,” Haight said.

Bothered by what the fortune teller told him