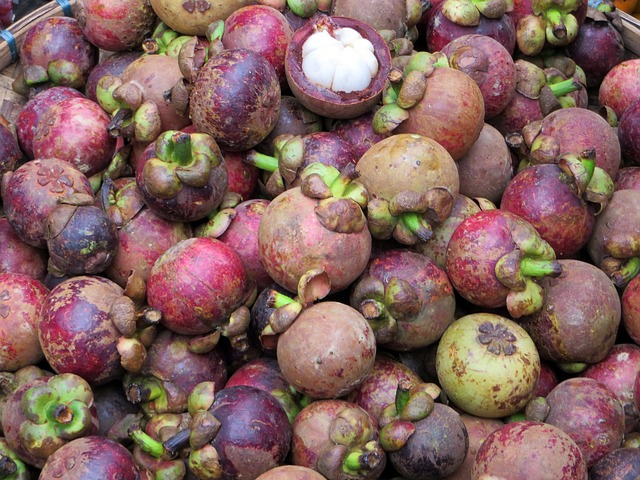 The production of seasonal fruits – durian, longkong and mangosteen from August to November 2018 revealed the tremendous potential of these crops in giving small farmers a high income. The volume harvested in 2018 was among the highest in many years.

Surprisingly, the high volume of production was matched with the huge demand, so farmers easily marketed the fruits at a decent price, thus, providing them with a good income. Consequently, many fruit growers who are thrilled of a better future, invested parts of their new found wealth in buying quality seedlings to be used for planting.

Triple P Farms and Nursery (TPFN) almost ran out of planting materials, as farmers were buying seedlings by the hundreds. Consequently, TPFN expanded the fruit nursery by raising from seeds thousands of parent materials for asexual propagation to meet the expected demand by the next planting season, which starts in May 2019. 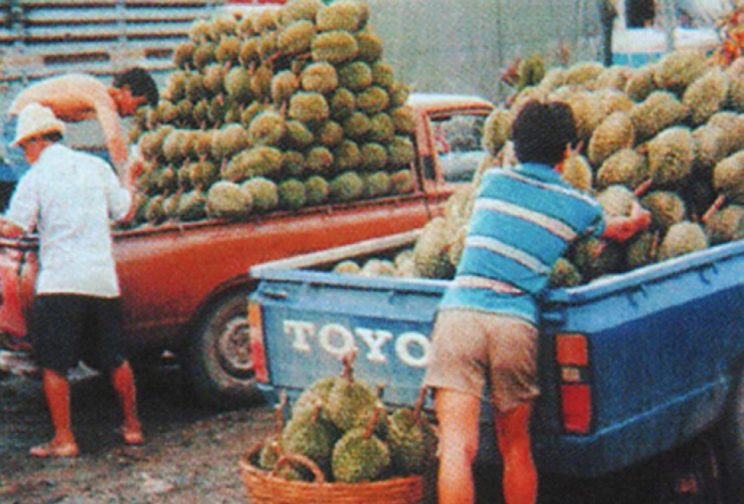 Harvesting is done in four to five years, producing at 10 years and beyond of 20 tons or more fruits/ha per year, and with an income of over P500,000/ha per year in a span of 50 years.

The improvement in the economy of the country was a major factor in bringing about the increase in the buying power of many customers to buy fruits. The emerging awareness to the nutritional and health benefits of fruits like mangosteen, encourages high fruit consumption. Moreover, improved farm-to-market roads, seaport, and airport facilities brought about by President Rodrigo Duterte’s build and build program, the emergence of rural marketing centers created by DA Secretary Emmanuel Piñol made it easier for small landholders to market their fruits at profitable prices. Inclusive growth is steadily growing in the fruit industry, wherein the small farmers, laborers, input providers, local fruit assemblers, domestic traders, and exporters are all benefiting from this emerging agribusiness opportunity.

The future of the fruit industry looks brighter due to the huge demand for Philippine fruits in the export market, particularly in China, South Korea, Europe, and others. The long shelf-life of longkong, mangosteen, and new durian varieties, makes possible the export to overseas markets. The economic miracle in China created a huge demand for these fruits, particularly durian. This prompted farmers in Thailand and Malaysia to put up farms for durian production.

In recent years, Malaysia and China signed an agreement where Malaysia will supply to China 20 containers of 20 ft. van of semi processed durian daily. The price offered by China is good, that is at an average of US$1.90/kg of semi-processed fruits. This year, an agreement was signed again where Malaysia shall ship unprocessed whole durian fruits to China. Thus, many farmers in Malaysia and Thailand are now changing crops (with lower income, including oil palm trees) to durian, targeting the China market. The production of tropical fruits, at present, is the emerging source of wealth among many farmers in Malaysia and Thailand. 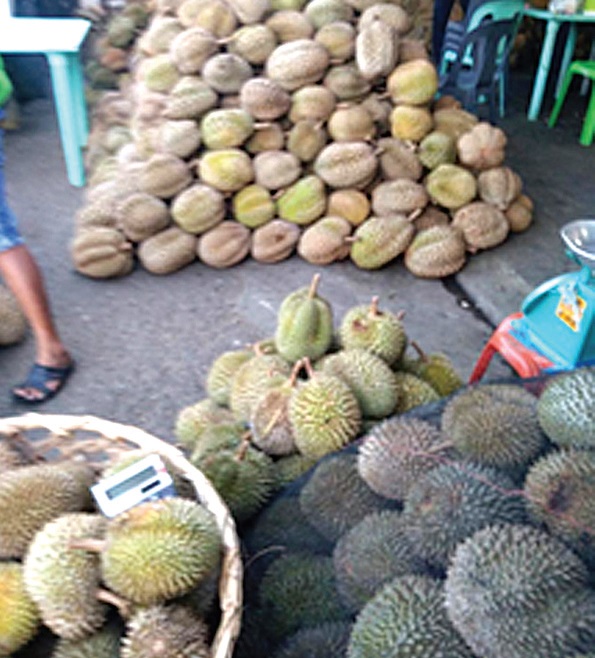 The capacity of both Malaysia and Thailand to supply fruits in the export market, however, is limited by the harvest season in these countries, that is, within April to August (Fig 1). Fruit production of Thailand from August to September, which comes mainly from Southern provinces, is small, not even enough to meet the local demand. This gives the opportunity for the Filipino farmers to supply the China market from August to November – the harvest season of these fruits in the country, particularly in Mindanao. To do this, the Filipino farmers have to expand the current area grown to durian in the country, estimated at 17,000 ha, to eight times more. By using modern techniques in the cultivation of these fruit trees and taking advantage of this opportunity, this shall bring high income to small farmers, earning them more than a million pesos per two hectares annually.

Among the production components of a modernized durian farming include the planting of large size planting materials (LPM) of 4 to 5 ft. plants (for early maturing, from four to five years after planting), and the use of phytophthora disease resistant varieties, and with high acceptance in both the domestic and foreign markets. The leading variety in Malaysia and Thailand, and now in the Philippines, is D197 or Musang King.

In the Philippines, Puyat variety now occupies the top priority in the domestic market. During the last fruiting season, however, the costumers who tasted Musang King confessed that the taste of this variety is far superior to Puyat. Musang King is also the top preference in China market prompting even the Thai farmers to plant this Malaysian variety. This variety is tolerant to phytophthora, the most devastating disease of durian. Planting this variety assures the planters of high productivity to over fifty years. Other varieties which are highly accepted in both the domestic and export markets at lower preferences are the Monthong and Kradumtong varieties of Thailand. These varieties, however, are being slowly replaced in Thailand by the new durian hybrids which we hope are also adopted in Philippine conditions.

Durian is recommended for planting at a distance of 8 x 8 m in well prepared field with deep loamy soil. Durian trees are best planted in places where there is good distribution of high amount of rainfall the whole year-round, except for the two to three months of relatively dry condition. The short dry period followed by rain, induces the plant to flower for fruiting. In places with long dry period, irrigation using drip or sprinkler system is highly recommended.

Other basic management activities such as regular and adequate fertilization, pruning, control of pests and diseases, flower and fruit thinning and harvesting are discussed in the “Handbook on Production of Export Quality Durian.”

Longkong is a variety of lanzones which was introduced in the Philippines in the 1980s from Thailand. It is far superior to any of the existing Philippine varieties which include “Paete”, “Jolo”, “Camiguin”, and “Maluso”. 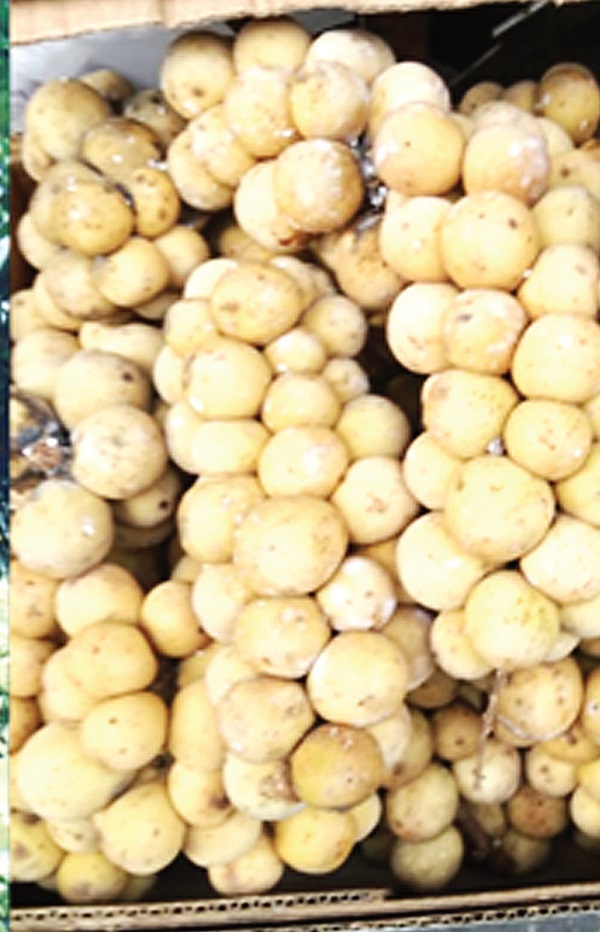 The steps in longkong farming include planting of grafted LPM at a population density of 200 plants/ha, adequate weeding, fertilization, pruning, and pest and disease control until plant maturity. The fruits are then harvested at the correct stage of ripening.

Another lanzones variety introduced from Indonesia and Malaysia is “duku”. Duku is superior in taste over the local varieties but inferior to the longkong. All the Philippine lanzones varieties are seedy; each fruit contains 2 to 4 seeds, and the peel has latex exudates which make eating somewhat messy. The shelf-life of the fruits of the native varieties is short, that is, at two to three days after ripening. On the other hand, longkong is latexless and seedless, with long shelf-life of 10 to 15 days after ripening. When properly handled, longkong fruits exude an inviting aroma which induces the costumers to eat more.

Asexually propagated LPM longkong trees are planted at a distance of 6 x 6 m. The field for planting maybe plain to hilly areas, with loamy to light soil, and with good amount of rain the whole year round, except for the two-month dry period. Longkong is not so demanding in water compared to durian. However, irrigation is needed to ensure high productivity. In flat lands, the field should be provided with canals between the rows of the trees for drainage. Other culture components, like weeding, fertilization, pruning, etc. are discussed in detail on “Handbook on the Lansium Production.”

The increasing popularity of mangosteen is brought about by the usefulness of the fruits as food and as medicine. Increasing number of people, including this writer, found that by eating mangosteen fruits, or by taking small doses of mangosteen extracts from the fruit peels, leaves, or stem bark daily, it brings vitality for a more active lifestyle. A person is less affected by a lot of common diseases, has longer time to work or study without easily getting tired at an advancing age.

Medical findings show that the fruit contains high amount of antioxidants useful for keeping the body in healthy condition. It is also one of the easiest fruit crops to grow – just weeding and fertilization as basic requirements. The crop can be grown organically as it grows well in soil high in organic matter, and does not require spraying of inorganic pesticides.

Growing the crop requires patience mainly because mangosteen is a slow growing plant. From germination up to one year, it grows to less than one foot with six pairs of leaves. The growth is accelerated during the second year to a height of 2.5-3 ft. Planting seedlings of less than two years old in the field is not advisable, as the mortality can be high, unless the plant is provided with partial shading to reduce sunlight to 50%. The use of LPM of 3 to 4 ft tall is recommended so it will fruit in four to five years after planting. Shading in the field is needed during the first two years of field establishment. This can be done by using banana plants as shade and for added farm income. Mangosteen also grows well as intercrop to coconut planted at low density of 60-80 coconut trees/ha.

A well-managed mangosteen plantation become productive in five to six years after planting, with yields of three to five tons of fruits/ha per year. At the 10th year and onward, the trees can yield ten to 20 tons/ha per year. The farmgate price ranges from P30 to R60/kg of fruits. This means an income of P500,000 to over P1,000,000/ha per year.

Experts gather to discuss the future of food sustainability

Today only: Nueva Ecija rice farmers given the chance to sell directly to MM consumers