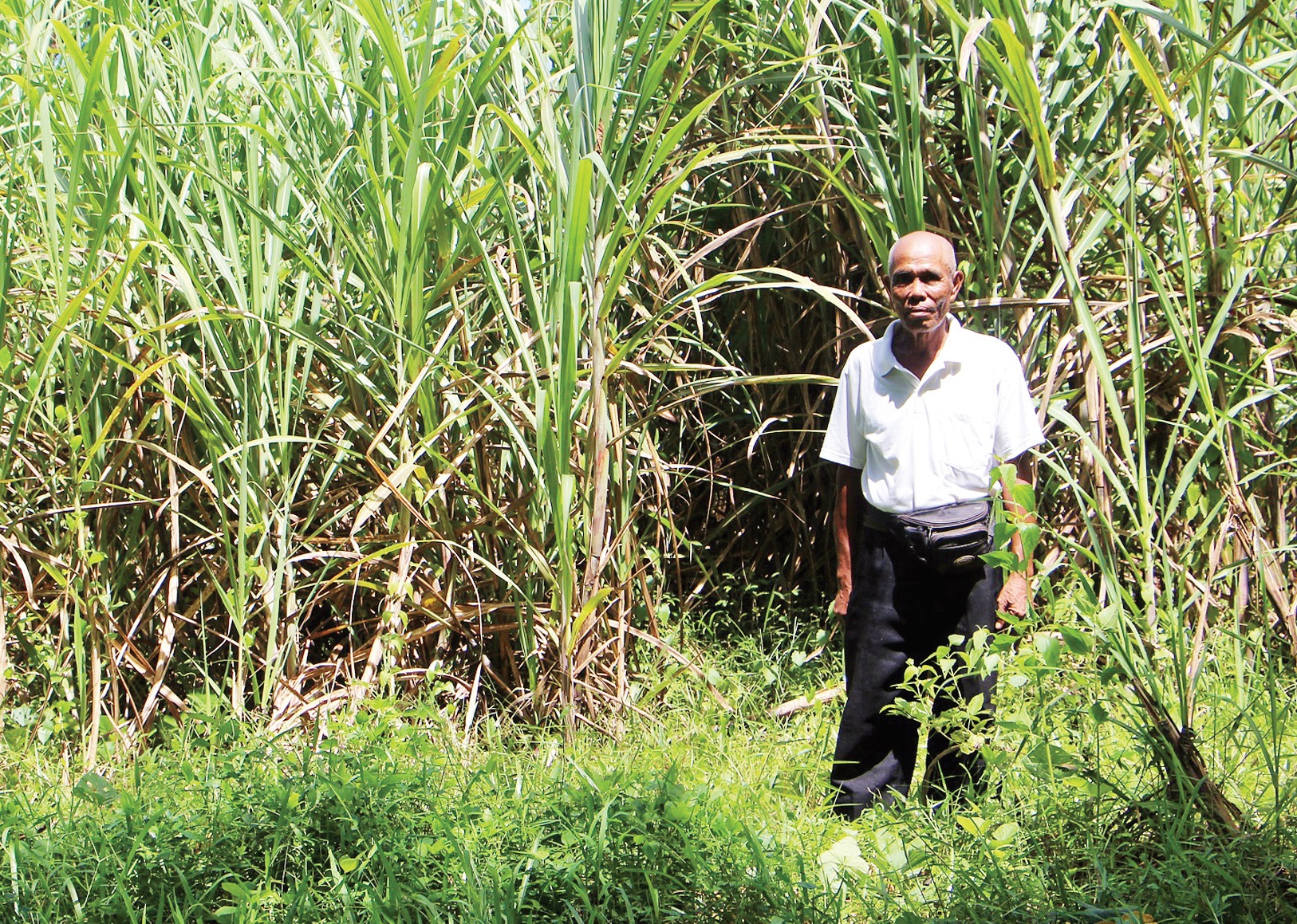 To begin with, let’s recall the quote made by Henry Ford, which says: “Anyone who stops learning is old, whether at twenty or eighty. Anyone who keeps learning stays young.”

For 65-year-old Diosdado G. Evangelista, Jr. of Barangay West, Candoni, Negros Occidental, finishing a college degree can provide an enormous satisfaction for him, like increasing his self-confidence. 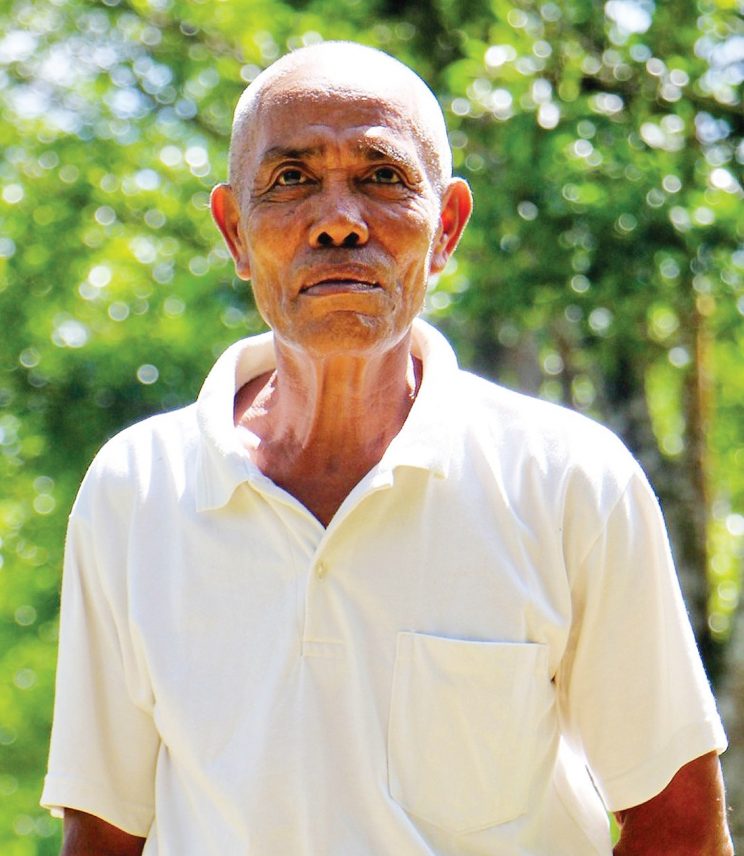 65-year-old farmer Diosdado G. Evangelista Jr. says, obtaining a college diploma at his age, is worth the effort and time.

He says attaining a college diploma at his age is worth the effort and time. Perhaps, it can open up new career opportunities, while at the same time, keeping his mind young.

Being a farmer since his youth, Evangelista has his own valid reasons for going back to school – to gain self-satisfaction of earning a college diploma.

His main motivation, however, to finish a college degree, was his five brothers and sisters who are all college graduates.

Aside from the fact that his four children, two boys and two girls, are also college degree holders and are now gainfully employed.

“Since I was already exposed to the different challenges of farming and have my own farmland to till, it is now the proper time for me to attain my ultimate dream – to have my own college diploma,” Evangelista said in vernacular.

At first, all the members of his family were hesitant and disagreed with his plan to pursue his studies. But he said his decision still prevailed.

He also narrated that he wanted to become a Mechanical Engineer after he graduated from high school, but his father enrolled him to a vocational school for an Auto Mechanic course, instead.

When Evangelista tried to protest, he said his father just told him that a Mechanical Engineer and being a mechanic is just the same.

After completing the vocational training, he tried to practice being a mechanic, but due to lack of tools, Evangelista just went back to their farm and continue farming.

He is presently tilling his own farmland which he inherited from his father, where 10 hectares are devoted to endangered and endemic trees like Apitong and Narra (because he values the preservation of the environment); five hectares to sugarcane and palay; and, another five hectares to cacao, gabi (taro), and ginger which are all naturally-grown, because Evangelista says he just uses his own concocted and fermented fertilizers.

He says he sources his allowance for his studies from selling gabi, ginger, and cacao seedlings. 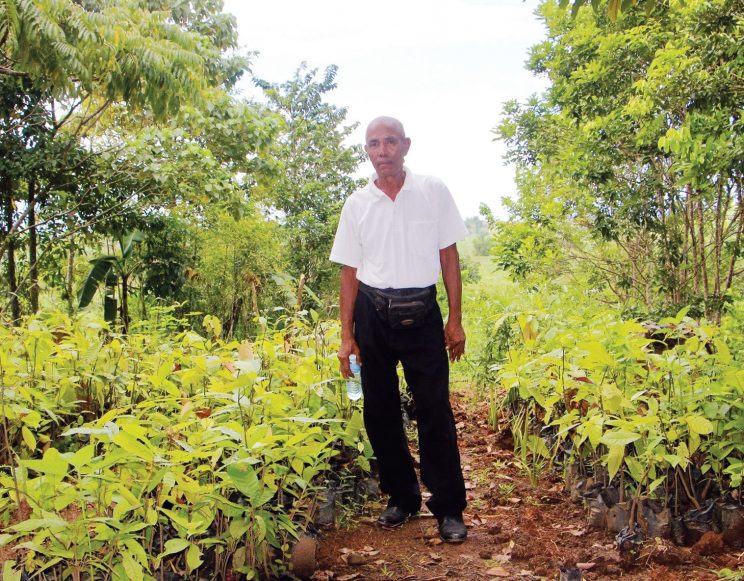 Some of the cacao seedlings in Evangelista’s farm.

After all, education for senior citizens is becoming common nowadays where their personal aims can be viewed from the perspective of quality of life, like the saying that education can increase the well-being and understanding of self and society.

As the oldest student, Evangelista is presently enrolled at the Candoni Campus of the Central Philippines State University (CPSU) under the helm of Campus administrator Grenny I. Jungco.

He is taking up a course leading to a Bachelor’s Degree in Education.

However, his main objective is to earn a Crops Science degree in Agriculture, but the Candoni Campus has not been allowed to offer the course yet.

Unlike the other nine campuses of the CPSU, the campus at the municipality of Candoni has a very limited space to be able to offer agriculture courses.

Newly-installed CPSU President Dr. Aladino C. Moraca emphasized that since agri-related courses are not yet available at the Candoni Campus, they are now conducting community services wherein the residents, mostly farmers, are engaged in performing tasks related to agriculture, because the remote municipality is a farming community.

When asked as to why there are lots of enrollees who are pregnant, married, and even elders at the Candoni Campus, Moraca said that due to the municipality’s very remote location, majority of the residents did not have the means and opportunity to have a formal education in the urban areas.

“Since Candoni is a remote community, majority of the youth got married early, depriving them of the opportunity to study because their parents cannot afford to send their children to the main campus. Majority of the residents are poor farmers,” he pointed out.

Seeing the problem, the CPSU designed a program to put up a campus in Candoni to provide education to the marginalized residents. 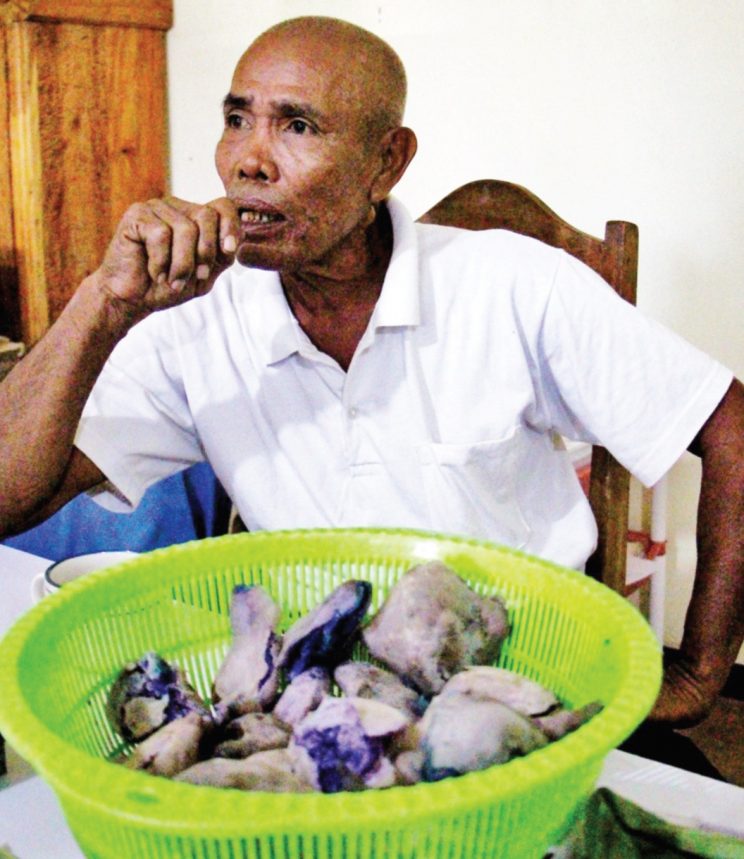 Evangelista with his freshly harvested naturally-grown purple yam which he served during our interview at the CPSU Candoni Campus.

In the meantime that the campus in Candoni is not yet offering agri courses, he said the CPSU is a facilitator of development through technology, by providing extension services, where the residents are trained in the locality or at the main campus of the CPSU in Kabankalan City, also in Negros Occidental.

He says that when the elders and the not so young in the 4th Class town of Candoni decide to study, they are not just pursuing their professional goals or seeking competitiveness among their peers. Their different objectives can be more related to their own personal interests or intentions, particularly in improving their quality of life, or probably becoming a role model for their children, he said.

“Therefore, enhancing the lives of the senior citizens and married couples in Candoni is the primary aim of the CPSU in providing education in the community,” Moraca said.

Since the objective of the CPSU Candoni Campus to provide agriculture or agri-related courses cannot be realized yet due to its limited area, Evangelista is planning to donate about five hectares of his land for the purpose.

It was learned from Jungco that this is now under a documentation process and subject to the approval of the concerned officers or officials of the government.

With the concerted efforts of the CPSU under the leadership of Moraca, the elders and those residents of Candoni who may not have the chance to study, will have the opportunity to make their later years more exciting and fulfilling, and make their dreams become possible.

Moraca says providing opportunities for the elders, and the poor residents of Candoni to be mentally fit, whether through higher education or its equivalent, represents a way to make sure that they remain active and independent for as long as possible.

The youth should replicate the efforts of Evangelista while they are still young, who now have the opportunity to finish their college education for free.