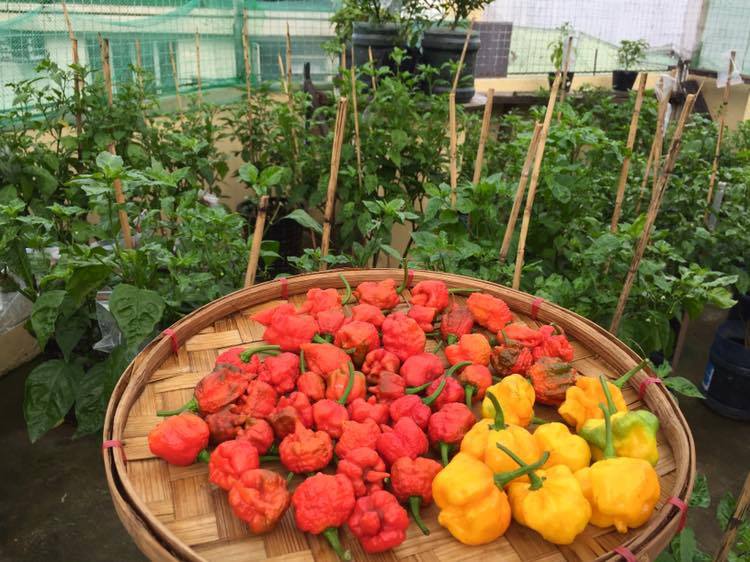 The Carolina Reaper (Capsicum chinense) was named the world’s hottest pepper in 2013 because its spiciness reached a record of 2.2M Scoville Heat Units (SHU), the unit used to measure spiciness. Aside from its sensational heat, the Carolina Reaper has a distinct fruity aroma and flavor. 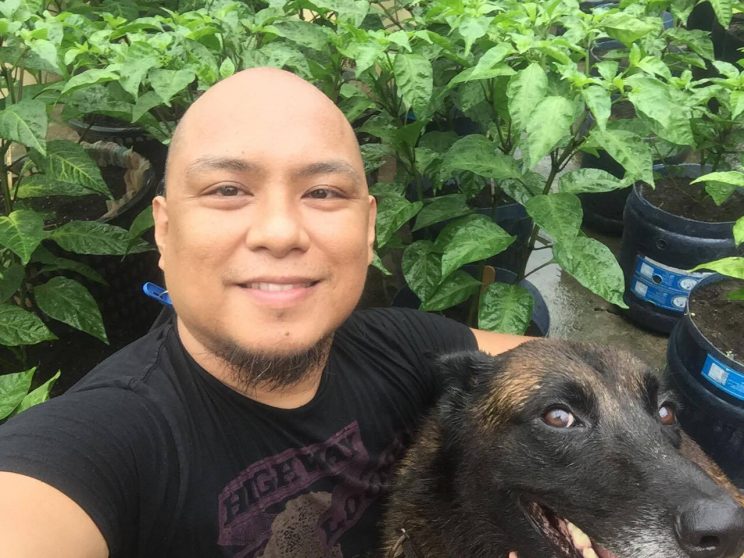 A PROUD CHILI GROWER – Tan posing with his dog in front of the Carolina reaper plants.

According to Tan, this effort is part of his advocacy to introduce the Carolina Reaper to the Philippines to keep the country from lagging behind its foreign counterparts when it comes to the globally competitive chili pepper industry.

Hailing from Albay, Tan has an innate fascination for dishes that have a zing to them. This interest is what also piqued his curiosity with the Carolina Reaper.

“I asked my stepfather, who works in the United States, to buy a packet of seeds directly from PuckerButt Pepper Company. The owner of the company, Ed Currie, developed the Carolina Reaper,” Tan said.

Currie, a native of South Carolina, developed the variety by crossbreeding ghost pepper (formerly the world’s hottest pepper) and habanero. The result is the Carolina Reaper, which got its name because of its place of origin and its ‘tail,’ which resembles a scythe or scorpion tail.

Once he got his hands on the seeds, Tan started to plant the pepper variety on his rooftop using recycled water gallons as planters.

Since the seeds came from the US, it was a challenge for Tan to grow Carolina Reapers in Philippine climate. However, this did not stop him from doing what he can to make the variant thrive in local soil.

“It was luck, actually. There were some trees that did not survive our local climate but there are those that are resilient. Since they’ve managed to grow on my rooftop, then it means that the seeds found in the pods are already acclimatized,” he said.

Tan added that he used these seeds from the originally acclimatized plants to propagate Carolina Reapers.

Despite finding enjoyment in caring for the plants and seeing them grow, Tan admitted that growing Carolina Reapers wasn’t an easy task.

As a newbie, he decided to seek more experienced growers who could help him throughout the process. He joined groups such as “Chili Growers Philippines” and “Pepper Lovers” where chili growers and enthusiasts commune.

From the members of the groups, Tan received tips such as not to place the pepper plants in extreme conditions because it can keep the plants from thriving.

“Carolina reapers are very meticulous. They can’t be placed in a place where there’s too much or too little sunlight. They also can’t be under or watered. There always has to be a specific balance and guessing isn’t an option,” Tan said.

Tan added that he uses a moisture meter to determine whether or not to water his pepper plants and he also monitors them on a daily basis.

If grown properly, the plants will begin to produce small, red or yellow pods that’s one to two inches wide and two to three inches long, with a distinct tail. The skin of Carolina Reapers have a bumpy texture.

It took around eight months before Tan’s Carolina Reapers bore fruit since he sowed the seeds by mid-March of this year.

Whenever Tan comes across a pepper that is of good quality—plump, lustrous, and healthy, he sells them as seed pods to get others started on growing Carolina Reapers because he explained that it’s better to grow plants with seeds taken directly from a pod.

One reason for this is to avoid being tricked by other sellers. Tan related how one of his friends bought seeds from a seller only to have it grow as a green chili pepper variant locally known as “siling pang-sigang.”

Another is that if the pod used as the parent plant has good qualities, then its offspring will most likely share these characteristics as well. “It’s the same with breeding animals; if you want to have a good outcome, you have to select a good source,” Tan said.

Other than selling the peppers for propagation, Tan also uses the Carolina Reapers he harvests as the main ingredient in his hot sauce line, known as “Tang Mado” after his grandfather.

One hot sauce he developed, named “Beast”, is made purely from Carolina Reapers. Tan said this sauce “unleashes the beast” to those who think they can take the heat from the world’s hottest pepper. 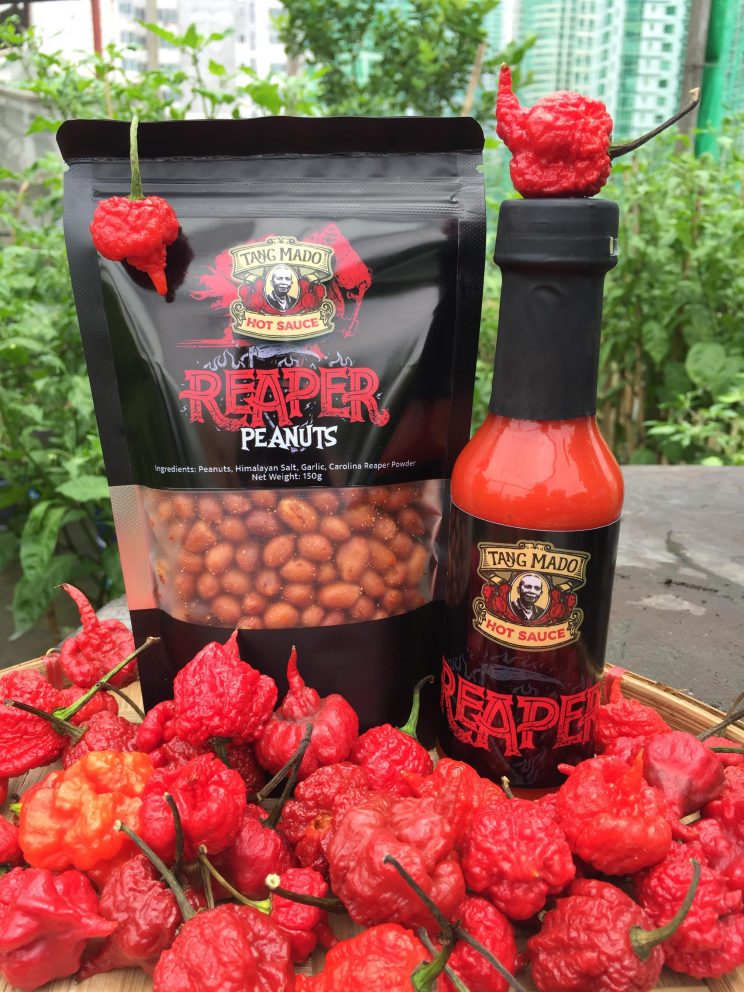 TANG MADO – Named after his grandfather, Tan sells products such as hot sauces and spicy peanuts–all made with or from Carolina reapers.

Tan developed these products with the help of members from the Philippine Hot Sauce Club. He would ask members to source produce from their farms located in Palawan, Mindanao, or Ilocos so he could add them to the hot sauce mix.

“I did research on the kinds of hot sauce available overseas and I wanted to put the Philippines on the map in terms of heat,” Tan said.

He added that through efforts like this, not only will the Philippines be globally- competitive, it will promote the use of local products as well.