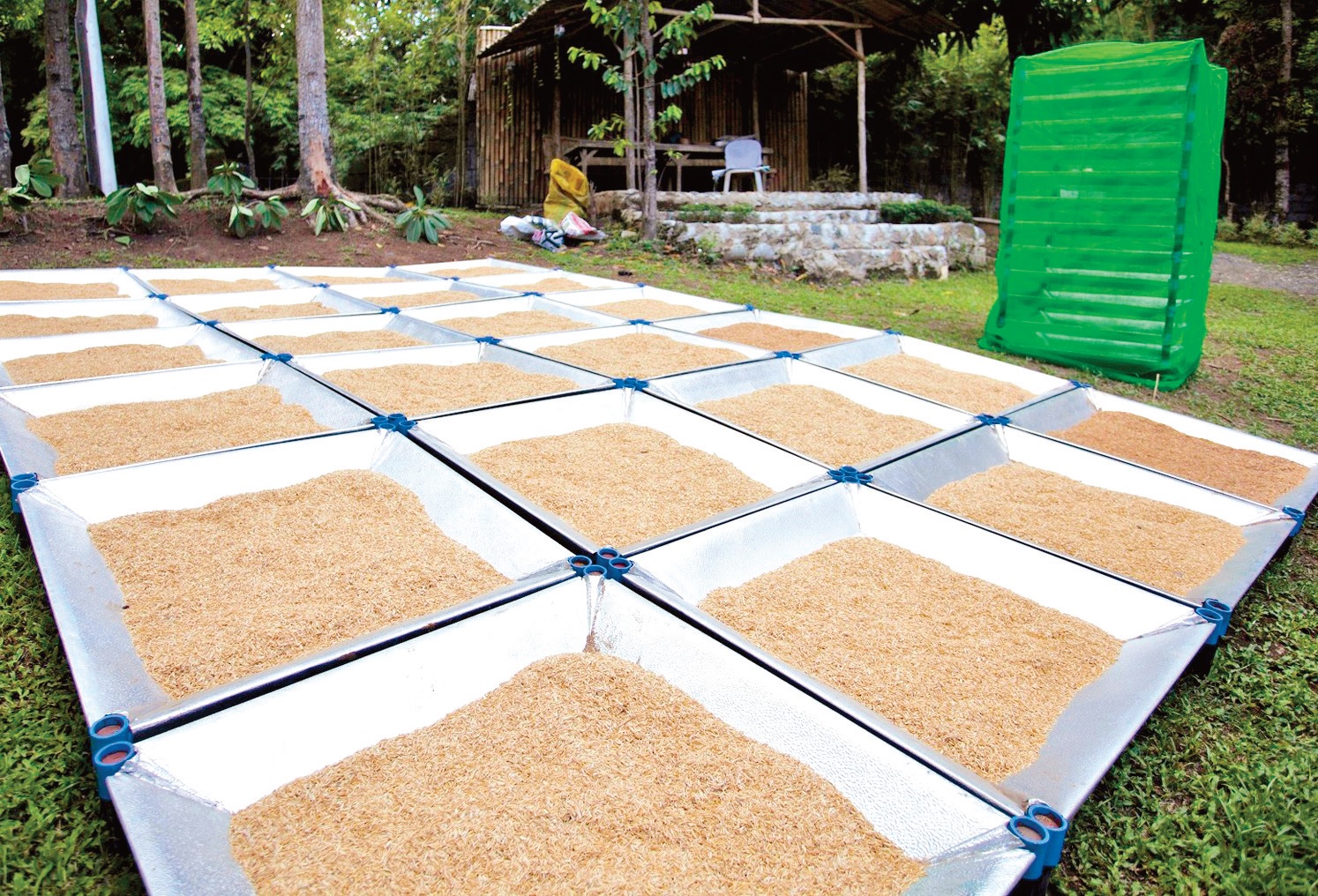 The Philippines is the 9th largest rice producer in the world, accounting for 2.8 per cent of global rice production. Rice is the staple food for about 80 per cent of Filipinos. It is the single most important crop in the country.

Drying reduces grain moisture content to a safe level for storage. When rice is harvested, it contains up to 25 per cent moisture. High moisture level during storage can lead to grain discoloration, and encourage development of molds.

Traditional drying methods are still old practices, such as mat drying where the threshed palay (unhusked rice) are spread on mats and canvas. Another one is pavement drying used in large scale drying. Here, palay are laid on pavements specifically made for drying grains. The last method is using a whole stretch of highway as rice dryer. This is both hazardous to both rice dryers and motorists who have to hog the clear half of the road to avoid running over the grains. 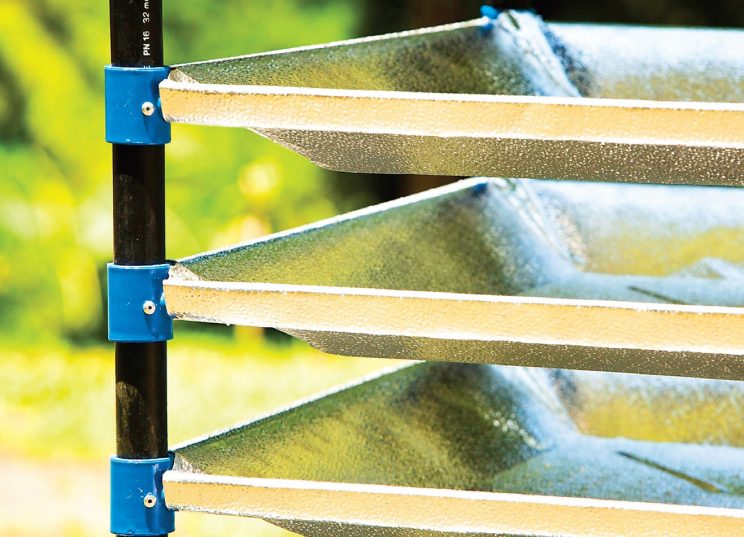 Due to this road hazard, the Department of Public Works and Highways (DPWH) issued a statement several rice drying seasons ago, reminding citizens that it is unlawful for any person to convert any part of the public highway, bridge, wharf, or trail to his own private use, or to obstruct the same.

To solve this perennial wasteful palay drying every harvest time, to which losses already totaled to about P12 billion, inventor-businessman Francisco “Popoy” Pagayon invented Portasol, a stackable set of grains thermal drying trays, which can accommodate 150 kilos of palay per drying. Portasol is ideal for small rice farmers with one to two hectares of ricefield.

Pagayon, a high school dropout who became rich due to his inventions, started his ingenious career in 1969 when he devised a mechanized replicator while working with a relative in his school supply business. He called it Oralograph, after his mother’s surname, Oral. He got his first million at the age of 34 by supplying garden tools to a government agency.

Francisco “Popoy” Pagayon, president of the newly enhanced Filipino Inventors Society Producer Cooperative (FISPC) in Quezon City, made Portasol to solve rice drying problems and to dry rice even during the wet season. The Filipino Inventors Society was established on October 14, 1943 and is the oldest NGO of Filipino inventors, researchers, technologists, scientists, industrial designers, and engineers.

The FIS aims to generate, produce and market indigenous inventions and technologies, like what the present FISPC is doing in earnest, to help attain economic progress and industrial prosperity of the Philippines. 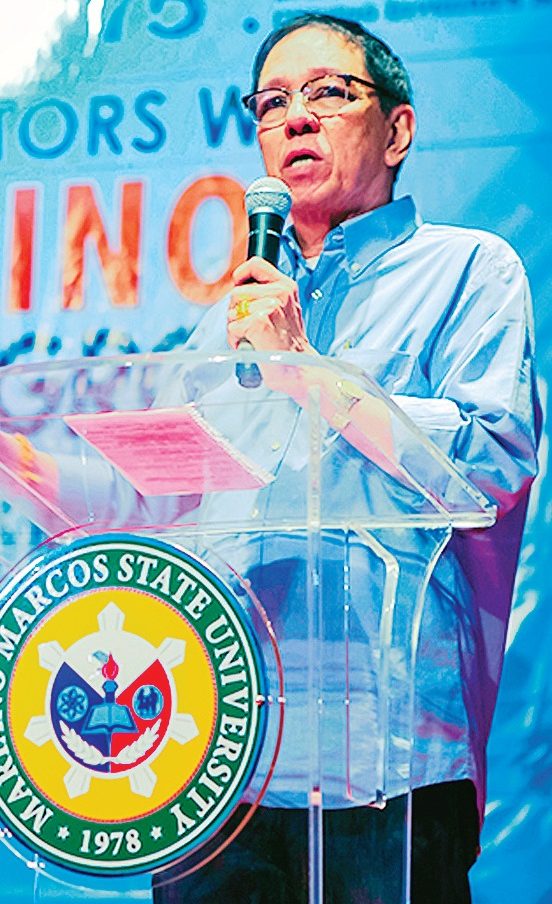 “Portasol is a simple solution to an old problem and an immediate response to the clamor of our farmers for simple, easy, more effective, and homegrown dryers that will put an end to the country’s perennial post-harvest loses,” explains Pagayon in his well laid-out FISPC’s showroom and business center at the ground floor of the Delta building at the corner of Quezon Avenue and West Avenue in Quezon City.

Interested parties may visit and view Portasol on display at the FISPC’s showroom. The portable solar dryer is composed of aluminum thermal trays that can be laid down on an open field or assembled into a rack covered with a plastic sheet as protection from pest and fungus. Aluminum is an excellent heat conductor and also corrosion-free, making it an ideal material for drying palay and other grains.

Field test data showed that Portasol tray can load a minimum one-fourth cavan of palay in an open field on a sunny day, and assembled into a rack at night with the heat conserved by the metal trays.

“Inventors need to unify and promote their products to reach their target market,” says the 72-year-old Pagayon. “We want to train our inventors to become entrepreneurs,” he continues. “The FISPC was formed in 2015 to push for the development and evolution of the striving Filipino inventors into an industrial entrepreneur,” concludes the billionaire inventor. 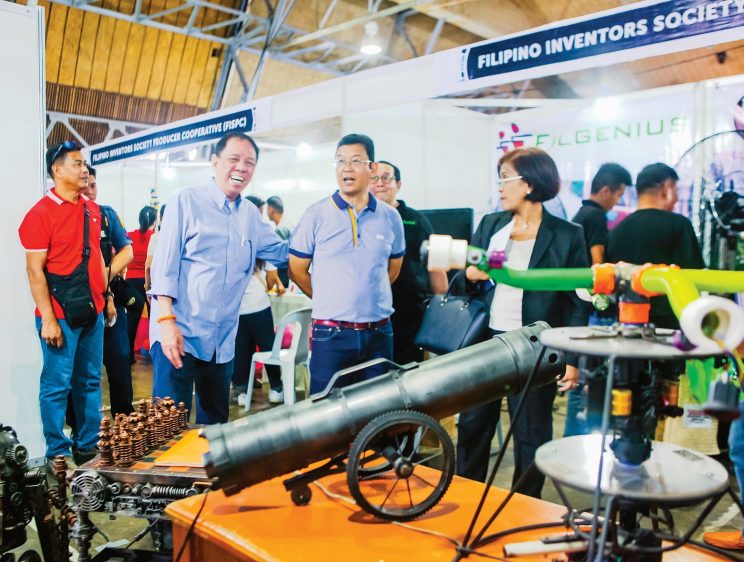 Pagayon also showcases his Probaton, an electric-cannon shape gun made up of electronics that load electricity to produce loud harmless explosion and can be used during New Year’s Day revelry.

Pagayon is also credited for the creation of “Probaton,” a truncheon like those used by American policemen. It has armed more than 150,000 policemen and village watchmen across the country. To stop firecracker injuries every New Year’s Eve bombastic celebration, Pagayon came out with e-firecracker, an electric cannon-shape gun made up of electronics that load electricity to produce loud harmless explosion.

With inventions like Portasol and its positive effects on post-harvest production, there’s no other way for the Philippines but to become rice-sufficient in the years to come.