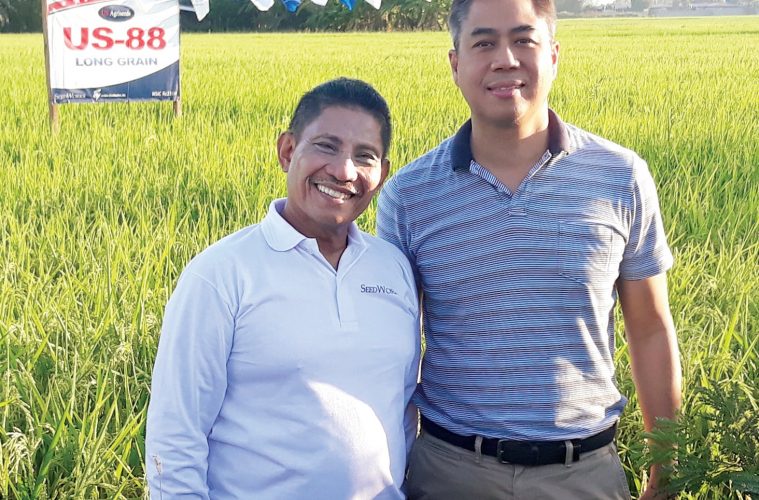 Up to 85 farmer groups and other stakeholders in the rice industry had the chance to observe various improved rice farming techniques in the just concluded 8th National Rice Technology Forum (NRTF) that was held in Calasiao, Pangasinan on March 19-21, 2019.

According to Carlos Saplala of SeedWorks Philippines, one of the participating seed companies, 37.5 hectares located in Urdaneta and Asingan were planted to various hybrid varieties grown using different systems. The rice crops are nearing maturity and the attendees can really appreciate the advantages of using the right varieties and cultural practices that could help increase yields, and at the same time, reduce production costs.

For instance, three different ways of establishing the rice crop were showcased. One is by manual transplanting. Another is by using a mechanical transplanter. And the third is by direct seeding. Each one has its own advantages and disadvantages. It has been established that by using a transplanting machine, the farmer can save about R3,500 on labor per hectare. Mechanical transplanting also can finish the job fast. Direct seeding by “Sabog Tanim” is fast but the right variety should be used. TH82, a variety from SeedWorks, is perfect for this type of crop establishment because it has vigorous root system that makes it resistant to lodging and other stresses.

Saplala believes that farm mechanization is the way to go to make rice farming more competitive. Other farming chores that can be mechanized include land preparation, seedling production, spraying foliar fertilizer and pesticide by the drone technology, rice harvesting and threshing that can be done in one passing, together with baling of the rice straw. Drying and milling are postharvest operations that are mechanized.

SeedWorks showcased two of its high-performing hybrid varieties in the derby. By the looks of the stand of the two varieties, Saplala is confident that the two will produce high yields. Both have proven performance in previous demo farms. A few years back, there was a demo on transplanted seedling by machine at the Central Luzon State University. US-88 came out as the highest yielder. US-88 is well known for its resilience to abiotic stress and diseases. Consumers love US-88 for its long grains that are soft when cooked. It is also highly suitable for milling into brown rice which is considered more healthy than well-milled white rice.

The other SeedWorks hybrid showcased in Pangasinan is TH-82 which was the top performer in a rice derby that highlighted the National Hybrid Rice Congress in M’lang, Cotabato a few years ago. This hybrid yielded 8.05 tons per hectare which is virtually double the reported current national average yield of four tons per hectare.

The 8th NRTF, by the way, was part of the intensified campaign to convince farmers to adopt improved farming techniques through the collective effort of the national government (through the Rice Board), local government units, farmers, and the private sector, particularly the seed companies.

This appeared without a byline in Agriculture Monthly’s April 2019 issue.