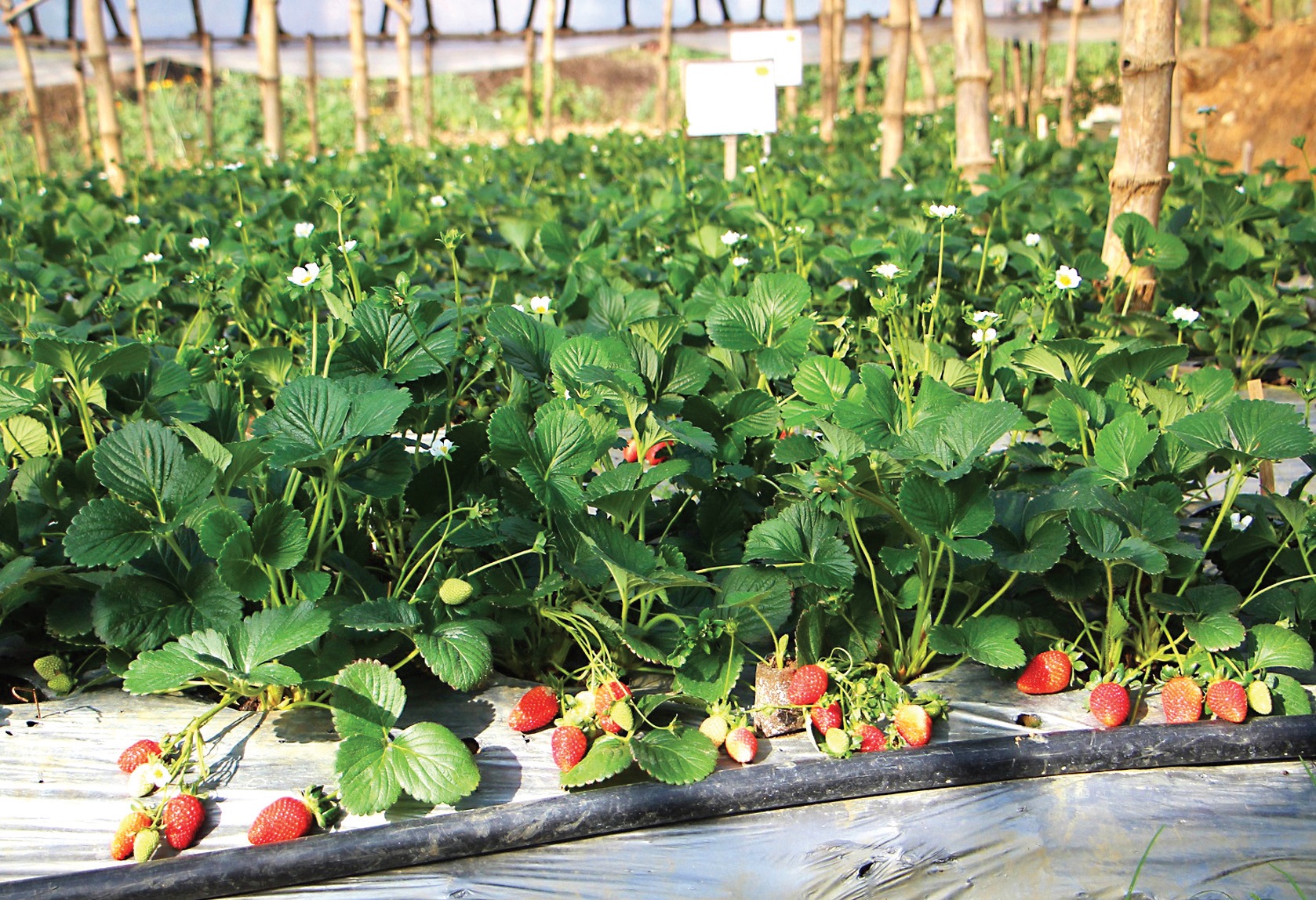 The ideal time to travel to Mountain Province since the months of March, April, and May have been known to be the peak of strawberry picking.

But mind you, strawberry picking is not only concentrated in La Trinidad in Benguet, it is now available in Baguio City, yes, a strawberry farm is now located just several kilometers from the Burnham Park.

The newest, or probably the only strawberry picking farm in the Summer Capital of the Philippines, at least for now, is the King’s Berry Farm located at Sitio Bilis, Sto. Tomas Central, Baguio City. 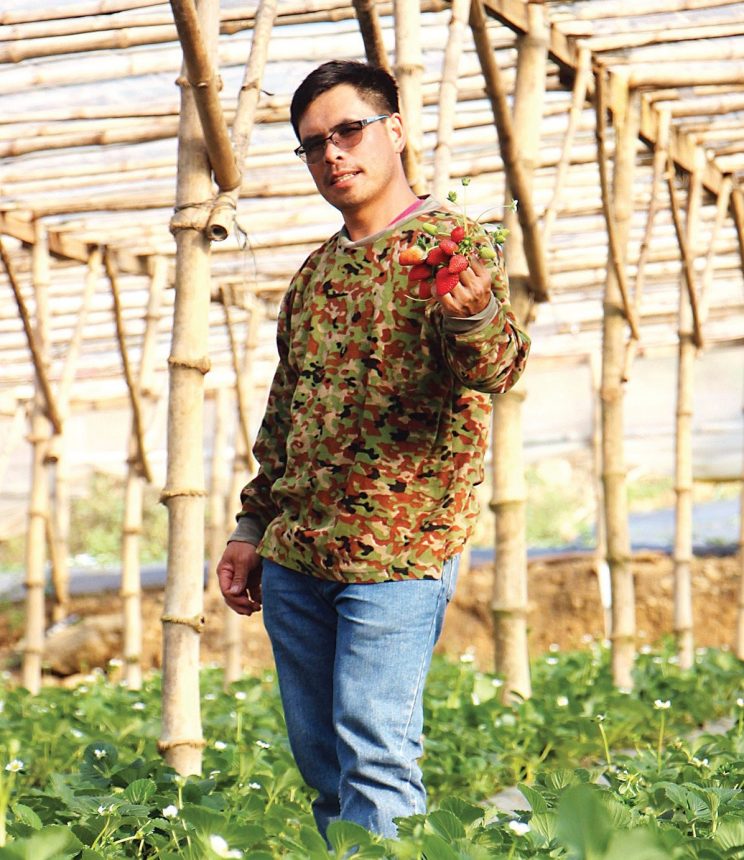 Solomon Lang-Ay with his freshly-picked strawberries.

The young and energetic owner is Solomon Lang-ay, who developed his own variety of strawberry which he calls the King variety.

He says he crossed several varieties to come up with an ideal variety, that could adapt well to the area’s environmental conditions.

However, it was not an easy task for Lang-ay. He had to experiment with several varieties with different breeding requirements until coming up with his own variety, which he has started to share to those interested and maintain their own strawberry farms as well.

However, to have the right variety is not the only gauge of success. He says one must also have the proper inputs to make sure that the crop will grow properly and sustainable.

To attain this, Lang-ay has to conduct researches and study about the inputs and farm implements available from Harbest Agribusiness Corporation.

“You cannot just plant and wait for it to bear fruit. You must also provide what the plant needs to grow properly,” he pointed out.

Initially, Lang-ay’s now offers a homey-type strawberry picking activity in his almost 3-hectare slopping farm at Sitio Bilis, via an improvised greenhouse, which he devised with the help of Harbest farm technicians.

Since the area was formerly used for vegetable production, he has to make drastic improvements and introduce innovation approaches to convert it into a naturally-growing fruit farm.

To naturally-produce quality strawberries, he now uses Daymsa inputs to fertilize his plants, and Jain Drip Irrigation System to effectively irrigate his strawberry plantation, aside from the mulch he uses which he source from Harbest also. 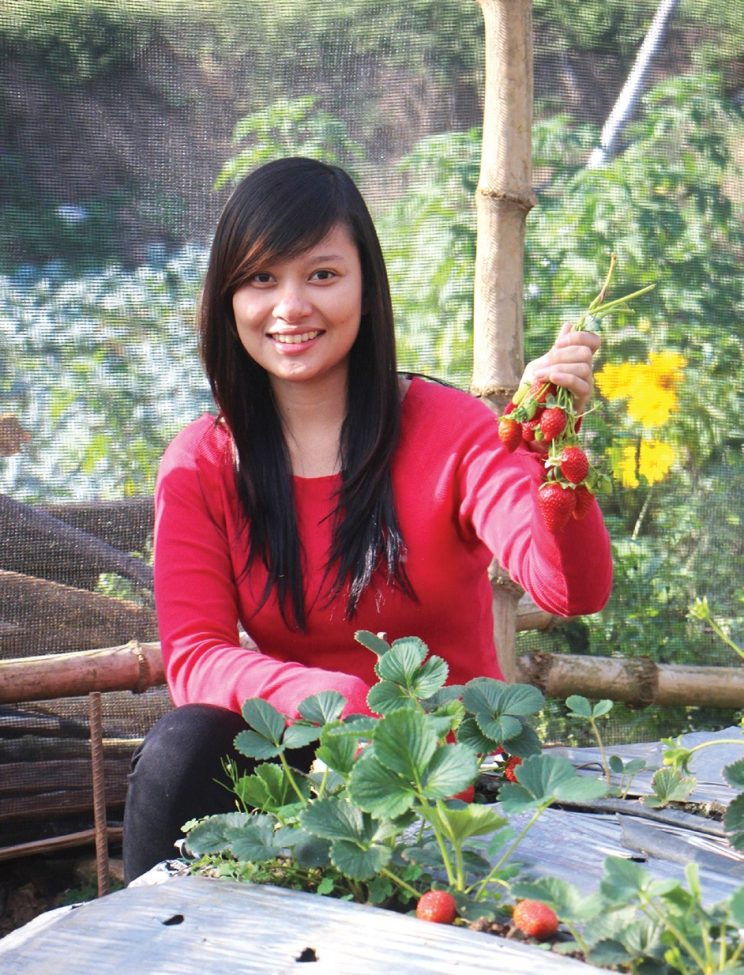 By using the said farm implements, Lang-ay can now produce hundreds, if not thousands, of strawberry runners which he sells and shares to the members of the community who wants to establish their own strawberry farms.

Lang-ay says the establishment of new strawberry farms will not compete with his farm or to the existing strawberry farms in La Trinidad, but will provide an alternative destination for tourists who will be visiting Baguio, aside of course, from providing additional income to his villagemates and would-be growers.

Since Lang-ay is the president of the Bilis Sto. Tomas Central Farmers and Livelihood Association, he is encouraging the other members to establish their own farms as their modest contribution to the booming tourism industry in the Summer Capital of the Philippines.

This was manifested during the recent General Assembly of their association held at the King Berry Farm with the theme “Ti tarigagay a progreso, tinnulong ti kasapulan (For the attainment of progress, helping one another is the utmost necessity)”.

After all, the strawberries and other vegetables now being produced by Lang-ay are naturally-grown by applying his crops with Daymsa fertilizers like Naturfos, Naturamin WSP, and Naturcomplet G, which likewise allowed him to produce the healthy runners.

By using Naturfos, which can be easily absorbed by the plant, it provides high uptake phosphorus and potassium, thus, improving crop nutrition during stages of highest activity.

While Naturamin WSP is a growth promoter in a high purity soluble micropellet format, which is recommended for crop activity stimulation in periods of increased energy demand like cultivating strawberries, helping the crop to overcome stresses such as drought, pests and diseases, and frost, among others.

For improving the soil structure, Lang-ay recommends the use of Naturcomplet G, which can also increase organic matter content, allowing plants to use all the available nutrients such as macro and micronutrients in the soil. 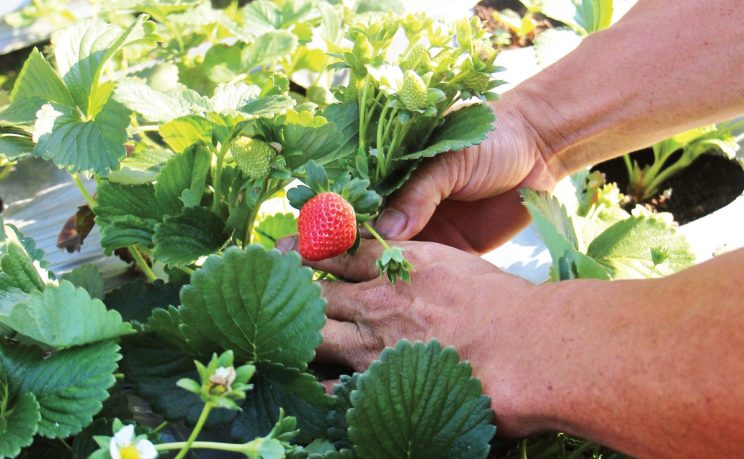 Aside from producing an abundant number of fruits, Lang-Ay’s strawberry plants also produce hundreds of runners.

For maintaining the water requirements of his strawberry plants, Lang-ay irrigates his plants by sourcing potable water from a nearby spring and distributing the water through the Jain Drip Irrigation system, making the production of strawberries almost year-round.

It was learned from Lang-ay that the local government is supporting his group due to the fact that the area is becoming a potential agri-tourism destination where naturally-produced strawberries and vegetables can help boost the livelihood opportunities of the villagers that yearn to maximise the available spaces in the sitio.

Lang-ay says the resilience of the members of his group, and their willingness to adopt the farming technologies and innovations which he have been implementing at his farm, and which will eventually allow the almost year-round production of strawberries, will lure the influx of tourists and visitors.

Aside from fresh strawberries, visitors will soon have a taste of the Strawberry Wine which is now being developed by Lang-ay, which is semi-sweet, smooth, and very nice to sip – a must try when the wine becomes commercially available, says Lang-ay.

King’s Strawberry Farm is located at Sitio Bilis in Sto. Tomas Central, just several kilometers away from the city proper and can easily be reached via the Marcos Highway.

Saving trees by using coconut husks as an alternative to wood