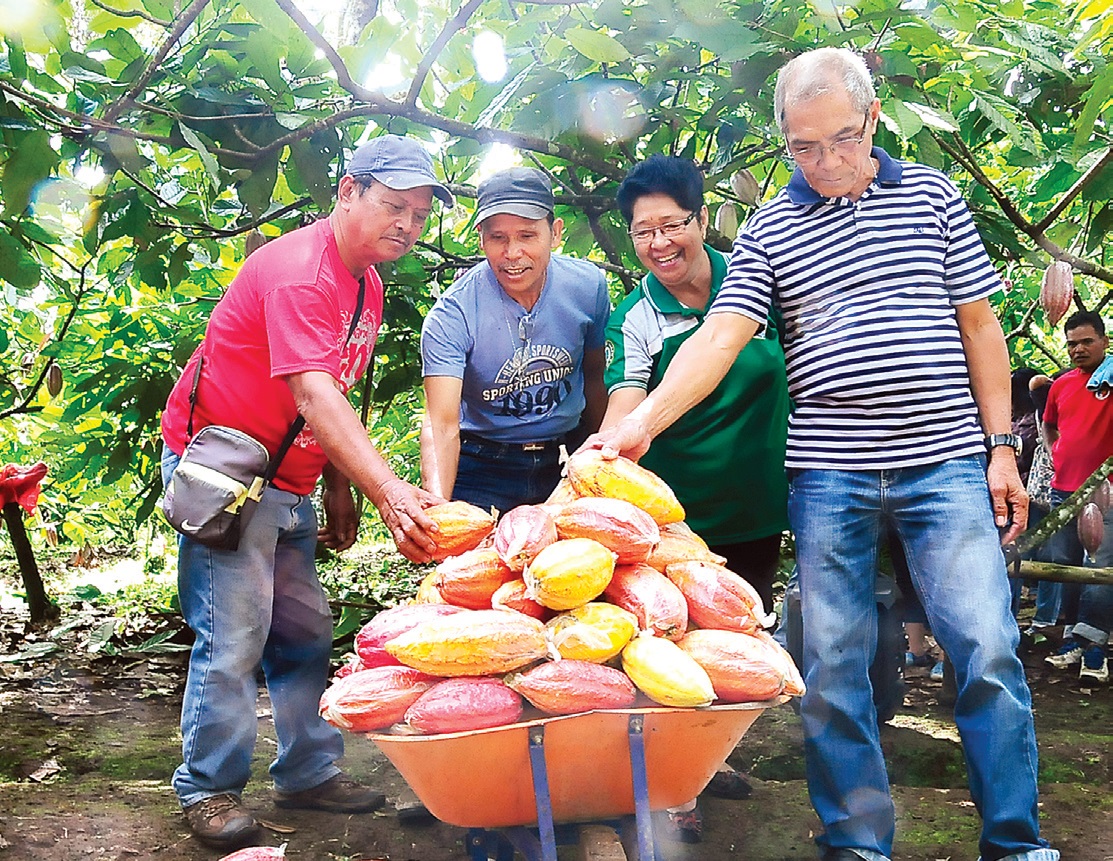 Fermin Anog, 61, has been a farmer all his life. Prior to the introduction of a Community-based Participatory Action Research (CPAR) project in Calinan District, Davao, Mang Fermin is already into cacao growing, but he was into planting native cacao.

CPAR is one of the banner programs of the Bureau of Agricultural Research (BAR) and is being implemented nationwide through the various Regional Field Offices (RFOs) of the Department of Agriculture (DA).

The CPAR on Cacao Production, which started in 2016, aimed to increase the production of cacao in Calinan District, particularly in two baranggays (Sirib and Subasta), by introducing various research interventions including the integration of cacao recommended varieties, as well as capacitating the farmers on cacao production management. 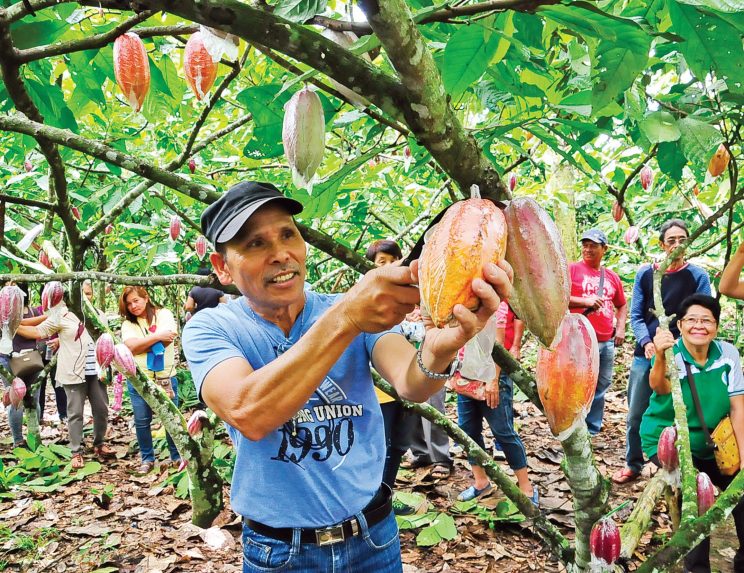 “I become a CPAR farmer-cooperator with the help of the agricultural technician here in Calinan District. She invited us in a meeting wherein CPAR was introduced to us. We saw the goodness and advantage of having been involved in CPAR so we decided to be involved,” recalled Mang Fermin.

According to Grace Gutierrez, CPAR coordinator of DA-RFO 11, they chose cacao because it is one of the major crops being grown in the Calinan District. “One problem that we observed during the site validation was that their old cacao trees (more than 20 yrs old) have been producing less, and yet the farmers wanted to sustain them as they were good varieties and high yielding, too. But the problem is the technology to apply to return it to high yielding tree and to preserve it as well,” she said.

She further mentioned that due to the limited knowledge in the current technology, problems such as unmanageable pest and disease occurrences, and soil exhaustion also resulted in low yield. “And this has something to do with the farmers’ lack of interest in participating in seminars and trainings, inefficient information dissemination, and lack of adoption in technical recommendations,” said Gutierrez.

With the introduction of CPAR in Calinan District, 30 farmers became interested and became farmer-cooperators. One of them was Mang Fermin, who then becomes the chair of the Sirib Active Group of Individual Growers Cooperative (SAGING Co-op). He owns 0.6 hectare allotted to CPAR cacao.

Part of the interventions in CPAR is the rehabilitation of the old cacao using side grafting or/and chupon. Side grafting technology is done by inserting a pencil-size cacao budwood stick to a triangular cut in a trunk of an old cacao tree, and covering the grafted cacao with cellophane to avoid rain water. After weeks, the cellophane is opened. The old cacao tree is opened when it reaches its maturity. A clonal rehab of cacao is done after a year. Meanwhile, chupon technology is done when a pencil-size rootstock from the old cacao tree is grafted with the new variety (UF-18 or BR25). Binding it with cellophane then opening it after three weeks, the branches are pruned so that the newly-grafted cacao will have enough sunshine. When the pod reaches its full blown bearing time, the old tree is then cut off.

“This means that the farmer has continuous income while waiting for the newly-grafted cacao to bear fruit in the same tree,” explained Gutierrez. 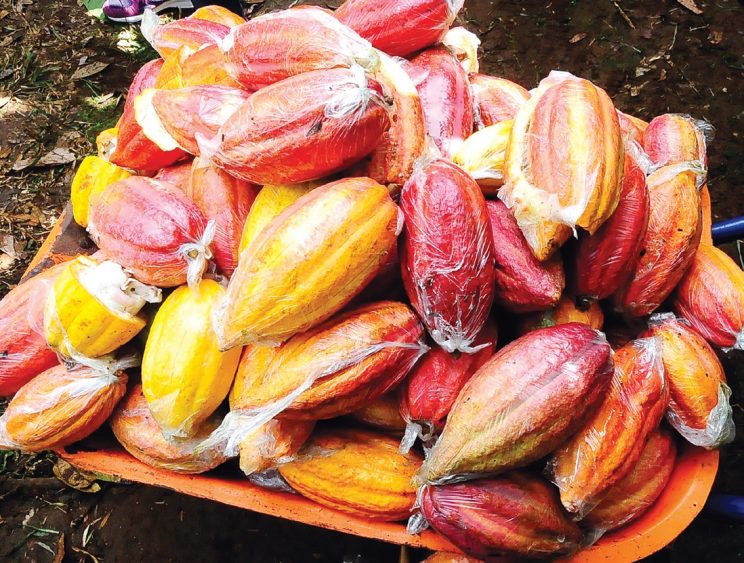 “I was involved with CPAR since July 2016. This is where I started to plant cacao varieties or grafted cacao like UF18, W10, and BR25. Aside from this, they also taught us the proper way of planting, how to suppress pests and diseases, harvesting, as well as proper pruning, soil sampling, and recommended fertilization,” said Mang Fermin.

As a farmer-cooperator, Mang Fermin received technical assistance, as well as initial inputs like new varieties of cacao plants (UF-18), fertilizers (organic and inorganic), farm tools and equipment in support to their farm activities like pruning shear, bolo, water container, among others. As a counterpart, the local government unit of Calinan District provided more training related to cacao management which is not included to CPAR training modules. CPAR training modules include hands-on training workshop from cultural management, down to capability building.

Mang Fermin mentioned that having been involved in CPAR brought him new learnings that he now uses to improve his cacao production. For example, he mentioned that he learned how to combine organic and inorganic (goat manure and urine) solution to control pests and diseases in cacao.

“The result was positive; it also controlled pests occurrences. We also learned to wrap the cacao pod with plastic (with opening underneath) until it reaches the size of about a battery. After three months, it will be ready for harvesting,” explained Mang Fermin.

During peak season, Mang Fermin harvests every other week (twice a month) with an average of 70-80 kilos cacao from his 0.6 hectare land.

“After harvesting, we remove the beans from the pods, put them in a jar, and sell them to the Cooperative or other interested buyers,” said Mang Fermin.

Mang Fermin mentioned that dry beans (which underwent fermentation processing) are being sold at a higher price; but due to added labor cost – drying, fermenting, and processing, most of the CPAR farmers are selling wet beans only. “It is hard to sell dry beans since the process is more laborious and needs the facility for drying, especially during wet months. So, our co-op sells wet beans only,” he explained.

Although there were challenges, Mang Fermin was positive in his outlook. “Aside from the technical aspects, the facilities and cacao varieties, CPAR helped us a lot. We can now control the effects of pests and diseases that have been our problem then, we are now producing quality cacao pods. And because of this, we could sell the variety in modest prices, which in turn, gives us higher income.”

“As a farmer, I am more inspired to work cause I have the means and the people [like farm technicians] who encourages me; and there are already sure buyers of wet beans unlike before,” Mang Fermin further explained.

“I am thankful to CPAR because they have been a big help to me to increase my production in a span of two years in the project. We meticulously followed the interventions. I would like to encourage other farmers to love and continue farming for their family and for the community,” he concluded.

As part of the sustainability scheme of CPAR, aside from the repayment scheme through their associations, the project has also provided the nursery inputs and seedlings from which the farmer-cooperators are now earning.

Gutierrez, during the turnover ceremony of the project, reminded everyone that although the project is now in the hands of the LGU, the CPAR Team of DA-RFO 11 will still be supporting them, particularly on the technical aspect, to ensure that it will continue even though the project has been completed.