By Elina Mark on Wikimedia

If there is an agriculture miracle in the ASEAN in the past two decades, it is Vietnam. It is not hard to compare Vietnam with the Philippines. They have similarities in terms of land area, population, agricultural area, and, I guess, farm sizes.

But there are also divergences: fertilizer use, mechanization, terrain, and irrigated land. First, fertilizer use is much higher in Vietnam. Second, farm operations are more mechanized. Third, irrigated land is almost four times bigger in Vietnam. The latter can be explained by the large areas of low elevation that makes irrigation feasible, especially in the Mekong River delta. This is a major resource advantage of Vietnam and explains why it is a major rice exporter and a high yielder. This is a fact that many Filipinos do not appreciate. This debunks the myth that because our Southeast Asian neighbors studied in UP Los Baños and IRRI, they have applied what they learned, and now, they export rice to us.

This article will compare the production performance, diversification and agri-food exports of the two countries in the past twenty years for production, and 16 years for agri export.

(a) Philippine Statistics Authority (PSA) estimate in 2015. (b) Asian Development Bank (ADB) estimate was 7 percent in 2015. World Bank -GSO Estimate in 2016 was 9.8 percent poverty incidence at national level and 13.6 for rural. Source: World Bank, circa 2010 for others

In the case of Vietnam, paddy rice (the largest crop) grew by only 8.5 percent, but other crops posted much higher increases: corn – +77 percent, rubber – +256 percent, coffee – +226 percent, cashew – +127 percent, and tea – +88 percent. The largest area increases are dominated by non-traditional exports.

Overall average yield rose by 17 percent for the Philippines. By contrast, it jumped 45 percent for Vietnam.

The Philippines has only two products with export of $1B a year: coconut oil and fruits (especially banana).Fruit preparation earned some $629 M.

A big contrast is Vietnam. It has five products with exports of over $1B a year: fish and seafood, coffee and pepper, nuts, rice, and fish preparation. Moreover, it has six more products earning over $500M a year. 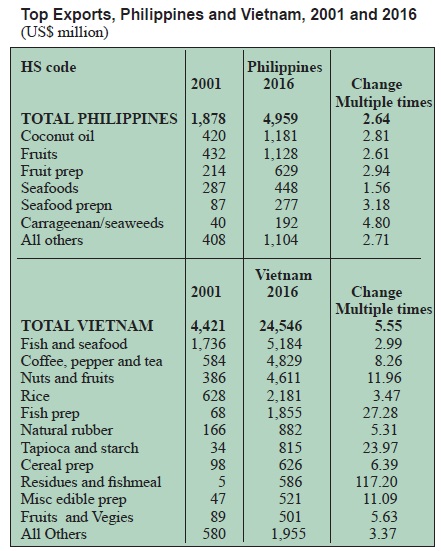 Where did the Philippines falter? There are many factors: focus on rice self-sufficiency, long-drawn land reform that led to lack of scale, lack of continuity of programs, absence of meritorious civil service, political influences in key appointments, and others.

For its part, Vietnam has strengths and weaknesses. It is not perfect. But its agriculture and poverty reduction record is the envy of the world. The readers may want to read the World Bank report on Vietnam.

The report notes that Vietnam’s agricultural sector has made enormous progress. The country has emerged as one of the world’s leading exporters of agro-food commodities and is among the top five for aquatic products, rice, coffee, tea, cashews, black pepper, rubber, and cassava.

It added that there are bright opportunities in the local and export markets but competing in these will depend on the ability of its farmers to address reliability, quality, safety, and sustainability issues.

Overall, Vietnam’s growth has relied heavily on human, natural and chemical factors of production, and much at the expense of the environment. But that is a different topic altogether.