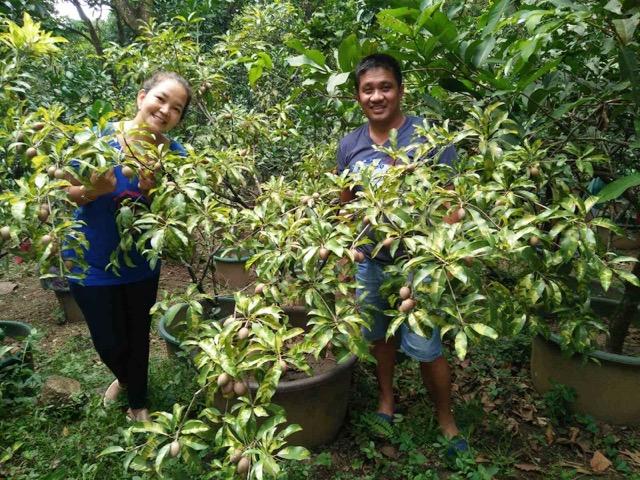 Friends are very important whether you are into farming or some other interest. They can be of help to you in many ways in the same way that you can be of help to them. So here are very nice agri people you would love to meet and who can become your good friends.

The first fellow we would like you to meet is a 61-year-old Frenchman who has an unusual profession and is a consummate organic farmer growing all kinds of fruit trees in a 15-hectare property in Pililla, Rizal, owned by his Filipino wife. He is Denis Martin, an explosives engineer who is an expert in drilling and blasting hills and mountains for mining and quarry companies.

Denis is a very gentle person, not an “explosive” one. He came to our farm a few days ago to buy fruit bags that he will use to protect his pomelos, mango and other fruits from fruitfly damage. That’s because he does not use any chemical pesticide to spray his fruit trees.

He has planted several varieties of mango from other countries which are much bigger than our carabao mango. He particularly likes the big fruits of the Golden Queen from Taiwan which is not sour when eaten as green mango. He also likes it as a ripe fruit because it is sweet and so fleshy, he can make a lot of jam from just a fruit. Oh yes, he is an expert maker of jams, most of which are sent to his hotel in Coron, Palawan which is managed by a son.

Denis is a generous person. He often shares his harvests with an orphanage in Tanay, Rizal run by an American lady who is married to a Filipino. His fruit farm has been featured in morning TV shows. Aside from mangoes of all kinds, he has avoado, rambutan, longkong lanzones, pomelo, sweet balimbing, imported makopa varieties, atis, guava and many more.

For Denis, growing fruit trees is purely “Pleasure Farming”. It does not really matter whether he makes money or not. What is important is that he simply loves growing fruit trees for home consumption or for sharing the fruits with friends and relatives.

He hated farm work as a kid

When he was a kid, his father had always asked him to work in the farm. He remembers dropping two or three seeds of corn on the furrow, stepped on them and then covered them with soil with his bare foot. He also remembers the difficulty of planting tobacco seedlings in the sun and then watering each one so they will not wilt.

The fellow, who is now 51 and a successful engineer, vowed he had to study well to escape the hardships in the farm. But now that he is well off financially and otherwise, he is back to Mother Earth enjoying his own brand of farming in Tanay, Rizal. He is Jerry M, Baltazar, Technical Manager of Integrated Power & Control Provider, Inc. with offices in Makati and Bacolod.

He bought a 1.6-hectare property in Tanay in 2014 which he has been planting to various fruit trees. His wife Ela who studied accounting is very supportive of her husband. She loves the fruits they harvest from their farm. She particularly likes the Rongrein rambutan that is nice to eat even if the fruit is still greenish and not fully red. They are planting more rambutan, including the R-5 and the Super Red varieties they newly got from a nursery in Teresa, Rizal. They are also planting UPLB Gold and Puyat durian varieties because they also love to eat durian.

Because of her immersion in the farm, Ela convinced Jerry that they put up a private hideaway where the family could relax and enjoy Mother Nature. And so the Dream Ridge, a private family resort, was born in 2017 on a 1,500 square meter property 1.5 kilometers away from their farm.

Dream Ridge Family Resort is now becoming a promising business with Ela in charge. When people saw their postings on Facebook, people got interested and inquired if they would admit customers. Facilities include a pavilion, lodging good for 30 people at a time, jacuzzi, swimming pool, grillers for barbecue, and others. The place is perfect for family reunions, company outings, birthday parties, and other events.

Plants you can grow in an edible garden