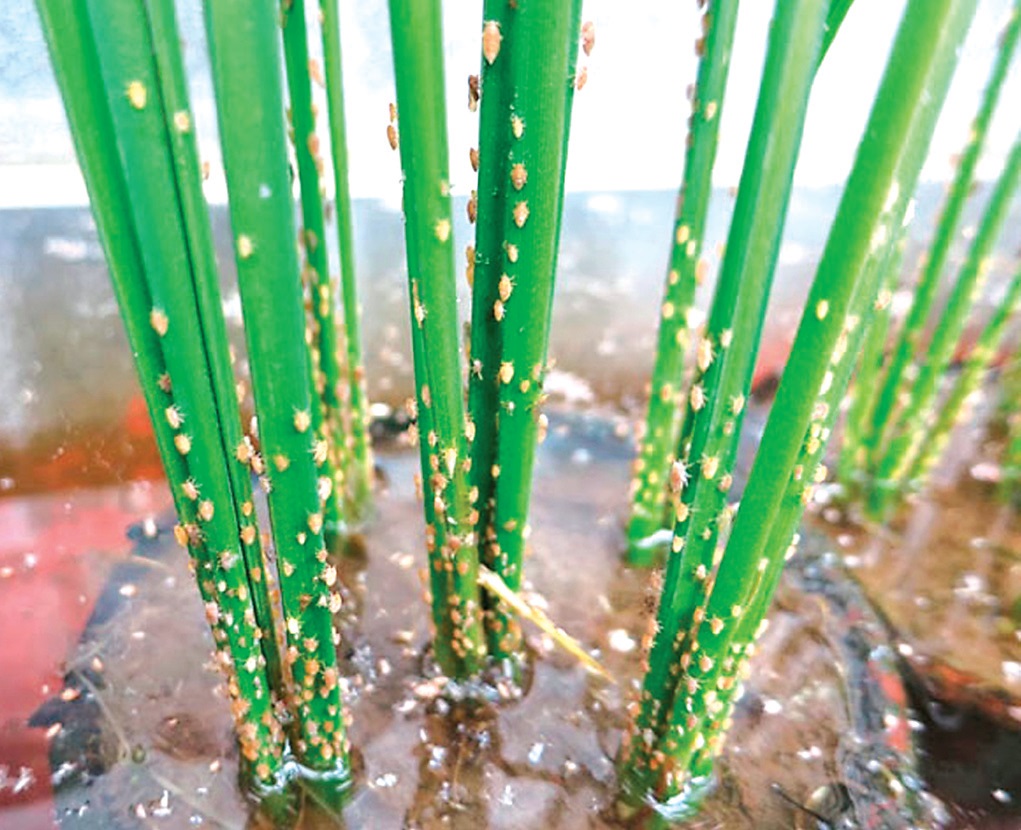 The rice planthoppers and leafhoppers are characterized by having two pairs of membranous wings, mouthparts adapted for removing the plant sap, and short bristle-like antennae. There are three stages in the life cycle – egg, nymph, and adult. The nymphs resemble the adults but instead of wings, they have wing pads.

Leafhoppers generally feed on the leaves and upper parts of the plants, while the planthoppers usually infest the basal portions of the plants. However, when planthopper populations become high, they are distributed all over the plant including the panicles. 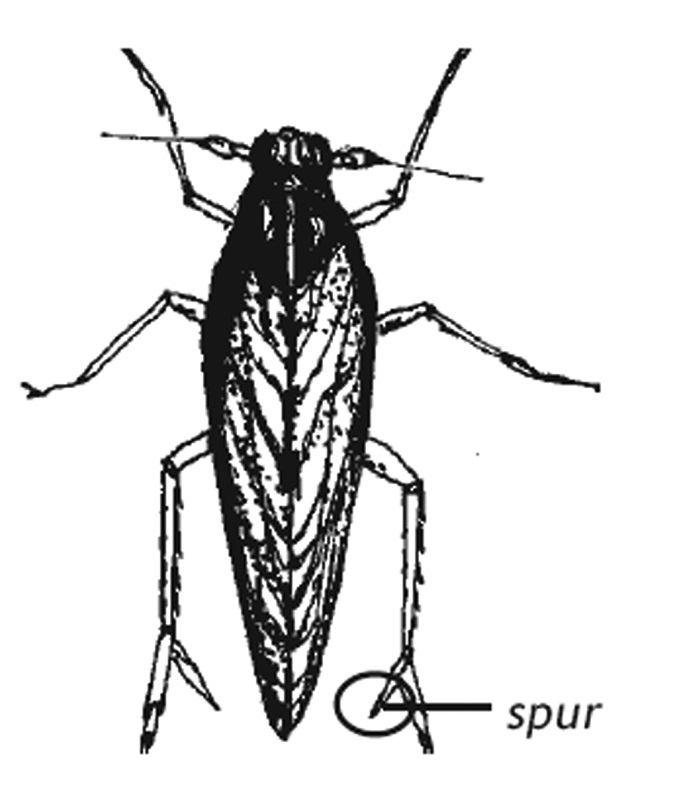 Life cycle
• Eggs are laid in batches inside the leaf sheaths and on the leaf midribs.
• Nymphs are brown.
• Nymphs molt 5 times within 13-15 days before becoming adults.
• It takes 7-9 days for the eggs to hatch into nymphs.

In a study conducted by Estoy et al. (2000), BPH population was generally low except in San Mateo, Isabela, where a peak was noted in August-September 1999. However, this was not observed in the following year (Fig. 1). 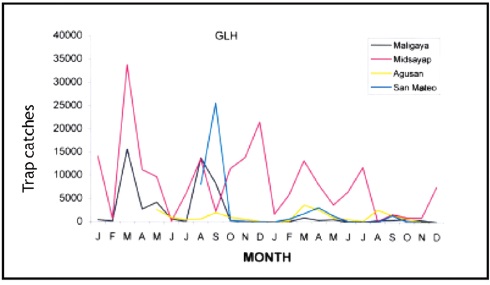 Knowing the peak of planthopper population in your locality will help you in deciding for proper management options. 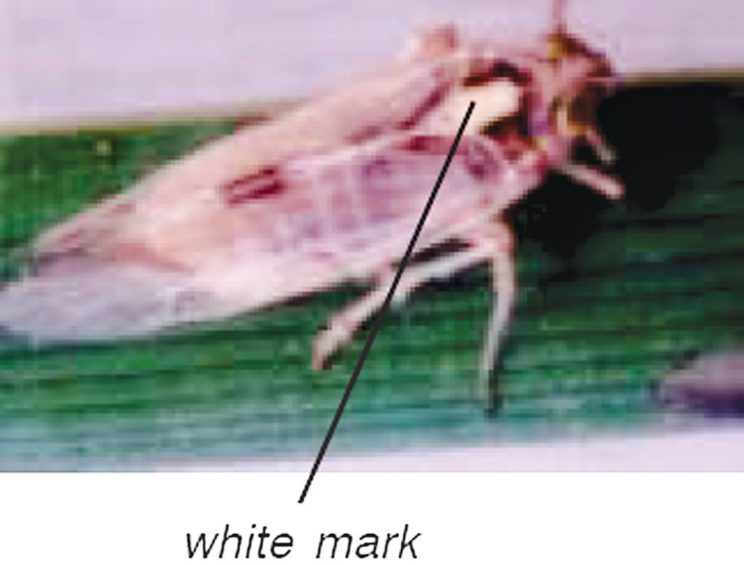 Insect characteristics:
• Adults are 3-4 mm long, either with short or long wings.
• Adults and nymphs resemble BPH but are pale brown with a white mark on its back.

Life cycle
• Eggs are laid in batches inside the leaf sheaths.
• Nymphs become adults in 16-18 days.
• Adults live for about 18-30 days, with females living a little longer than the males.

Where to look for planthoppers
• Adults and nymphs congregate on the basal part of leaf sheaths and stems of the plant.
• When disturbed, they move to the other side of the tiller or jump.
• Their presence can be detected by tapping plants with hand. They can also be detected in sticky traps. Adults with long wings are attracted to light sources.

Damage symptoms of planthoppers
• Adults and nymphs feed at the base of the tillers and remove the plant sap.
• Plants turn yellow and dry rapidly.
• Heavy infestations are characterized by patches of dried plants in circular manner. This condition is referred to as hopper burn.
• Honeydew excreted on infested plants becomes a medium for growth of sooty mold fungus, which interferes with normal plant functions.
• BPH transmit virus diseases such as ragged stunt and grassy stunt.

What favors them
• They prefer rainfed and irrigated wetland fields.
• Dense planting is prone to heavy planthopper damage.
• They attack at all plant growth stages, but plants are most susceptible from early tillering to flowering.
• High nitrogen levels, closer plant spacing, and higher relative humidity stimulate BPH to reproduce fast.
• Indiscriminate application of insecticides cause resurgence (by killing the insects. natural enemies).

Biological, coupled with cultural control such as the use of resistant varieties and proper crop management practices, is the most ideal planthopper management strategy.

• Use varieties that are resistant to planthoppers.
• Grow early maturing varieties to have a rice-free period of more than 1 month to break pest cycle.
• Plow under ratoons and volunteer crops after harvest as these may serve as inoculum for viral diseases.
• Avoid dense planting in areas with history of recent planthopper infestations.
• Practice appropriate and balanced fertilizer application. Split nitrogen fertilizer into three applications during crop growth to reduce BPH build-up.
• Raise the level of irrigation water periodically to destroy the eggs that are deposited at the lower portions of tillers and in leaf sheaths.
• Intensify weeding to reduce hopper density. Straight row planting with proper spacing does not favor multiplication of planthoppers.
• Maintain low water level to enhance killing action of useful organisms.

• Useful organisms should be encouraged to build-up by avoiding early application of insecticides. 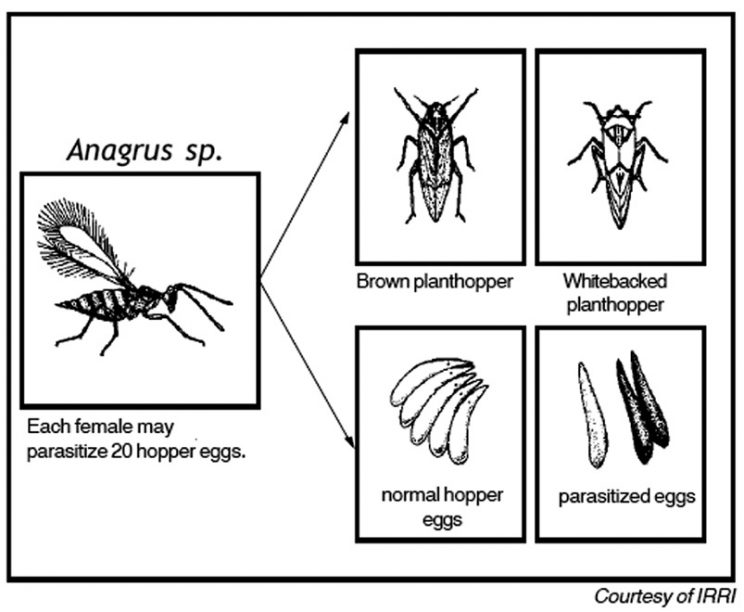 • Applying insecticides when population is mostly young nymphs is wasteful because useful organisms usually keep their numbers under control.
• Indiscriminate use of insecticides causes BPH resurgence.
• Selective insecticides can also be used on strategic areas with very high population. However, proper application must be observed.

In a study conducted by R.C. Joshi et al. in 1986 at Caloocan, South Cotabato, they found that after insecticide applications against defoliators, the population of the spiders (major brown planthopper [BPH] predator) decreased while the population of BPH dramatically increased. 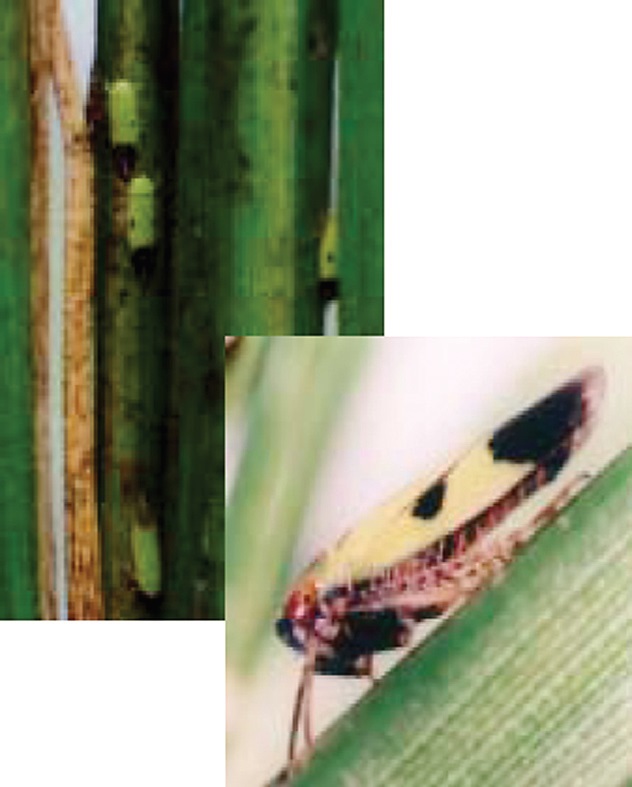 Where to look
• Mostly on the leaves and leaf sheaths.
• Jump readily when disturbed.
• Hand tapping of plants and use of an insect sweep net are rapid detection methods.
• Adults are attracted to light.

What favors them
• Grasses near irrigation canals and levees, rice ratoons, and re-growths provide food and are egg-laying hosts.
• Tillering stage is most favorable for rapid population build-up; seedling to booting stages are susceptible.

Life cycle
• Eggs are laid in small slits made in the soft parts of the leaf sheaths.
• Newly laid eggs are barely visible and are cylindrical, banana-shaped, and pale yellow.
• Nymphs emerge from eggs in 6-8 days.
• Nymphs have varied color pattern on the noctum (neck).
• The first instar nymphs are numerous on the lower surface of older leaf blades, but from second instar onwards, they distribute themselves evenly on the leaves.
• There are five instars before they become adult.
• The total life cycle from egg to adult is 22-26 days. 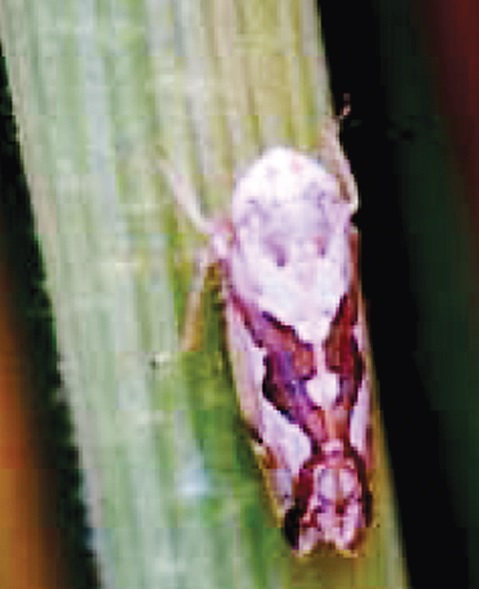 Insect characteristics:
• Slender, small insects; active and mobile.
• Adults are 3.5-4.0 mm long.
• Forewings are white with pale brown bands forming the shape of a .W. giving the zigzagged pattern.
• Like GLH, they jump readily when disturbed.
• They are present in all rice ecosystems.

Where to look
• On leaves and tillers near the base.
• On seedbeds and early growth stages of rice.

What favors them
• A weed-covered levee between planting seasons.
• Dense rice growth.

Life cycle
• Eggs are laid in rows within the leaf sheaths.
• Eggs hatch to nymphs in 7-9 days.
• Nymphs are white to yellowish brown.
• There are five instars lasting for 16-18 days before they become adult.
• Adults live for 10-14 days.

Cultural control
• Sanitation. Remove ratoons and volunteer plants because these may become a source of inoculum for virus diseases.
• Use resistant varieties.
• Transplant older seedlings to reduce the plants’ susceptibility during the vegetative period.
• Practice synchronous planting to reduce the risk of insect transmitted diseases.
• Avoid the use of high nitrogen fertilizer rate because it makes rice tillers more succulent, thus, more attractive to leafhoppers.
• Practice crop rotation with a non-rice crop during the dry season.
• Grow not more than two crops of rice per year.
• Avoid dense planting as it increases the population of leafhoppers.
• Know the peak of leafhopper population in your locality to determine possible management options (Fig. 3). 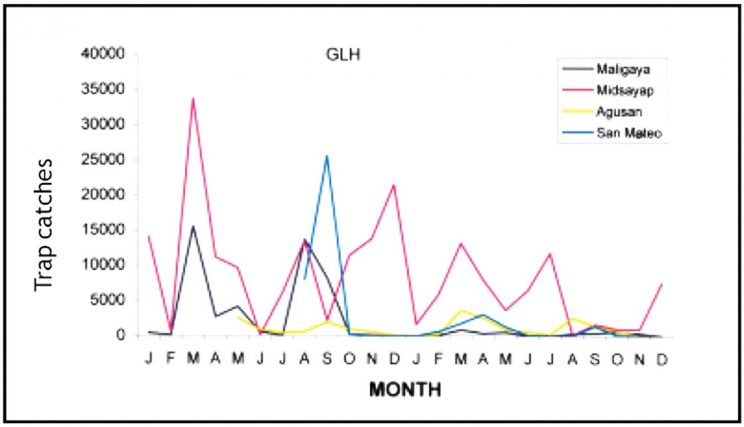 Chemical control
• Apply insecticide if tungro virus disease is prevalent in the area.
• Use insecticides judiciously to maximize the beneficial effects of useful organisms.

1. The leaves turn pale, yellow, and later wither leading to total drying of the plant. The drying plants are found in patchy form. It is caused by Leafhopper/Planthoppers (Go to 2).

2.1 When plants are gently tapped or swept with insect collection net, a large number of greenish colored hoppers with or without black spots on forewings are seen. Small greenish nymphs fall on water surface when plants are tapped. Hind legs have hairs. These are nymphs and adults of Green leafhopper.

2.2 When basal parts of the plants are tapped, brown colored hoppers fall on the water. They may be winged or wingless. Outgrowth are observed on the hind legs. These are nymphs and adults of Brown planthopper.

2.3 When the basal parts of the plant are tapped, light gray hoppers with white stripes on the middle of the thorax fall on water surface. Outgrowths are observed on the hind legs. These are the nymphs and adults of White-backed planthopper.

This appeared without a byline in Agriculture Monthly’s May 2019 issue.

Solar panels can help improve some crops, and vise versa