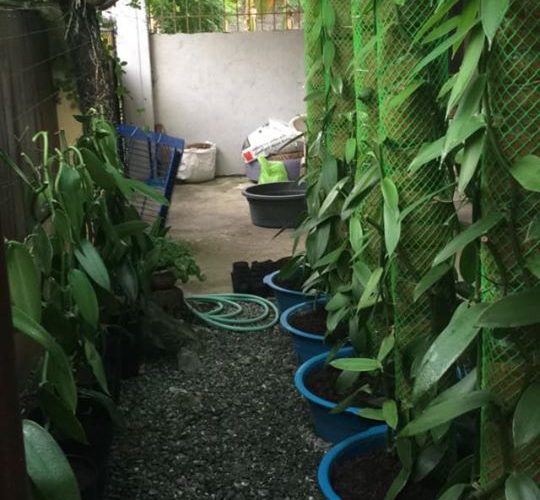 In part one, we featured the story of how Jay Cabutihan Jr., a businessman from Antipolo, Rizal, managed to grow vanilla plants right at the comfort of his own home was put under the spotlight.

A member of the orchid family, vanilla (Vanilla planifolia) grows as a clinging vine that can measure up to 300 feet where pale greenish-yellow flowers sprout. It needs a hot, humid environment with proper air circulation and medium lighting with partially shaded areas in order to thrive.

These conditions, although strict, doesn’t limit the possibility of growing the orchid in urban circumstances.

Cabutihan Jr. offered several tips on how it should be done in rooftops or gardens.

“Be sure to install some shade nets around the plants. Too much sunlight will cause sunburn on the leaves and could greatly affect the growing process as well as the quality of vanilla beans,” he said.

He added that growing this plant demands the gardener’s attention and patience because aside from its delicate state, the vanilla flower blooms only 24 hours so it has to be manually pollinated in order for it to propagate as well as develop into vanilla pods that are greatly demanded by the market.

Cabutihan Jr. explained that the extensive time and effort that one has to devote to growing vanilla plants makes its produce highly profitable.

This was one of the reasons the Rizal-based businessman decided to plant vanilla by July of 2017 after he acquired the seeds from a friend of his in Mindanao.

In creating the vanilla garden, he concocted a personal recipe for planting mix and installing shade nets that provide 60% of shade to shield the plants from intense sunlight.

Another measure that Cabutihan Jr. took to ensure that his plants will thrive was installing his own mist spray irrigation system. To make this, he bought two pieces of polyvinyl chloride (PVC) pipes and attached seven pieces of misting spray valves to them.

“I measured half a meter from each valve as spacing then I installed a controller at the end of the pipe so I can create an automatic watering system for the plants,” he said.

The vanilla plants have a watering schedule of thrice a week to keep the soil moist but not too wet because over watering causes fungi and can kill the plants.

Now, he owns 25 plants from which he harvests about 2.5 kilos of vanilla beans which he cures or dries before it can be sold as an extract to the local market.

“Various benefits can be derived from vanilla–from both the pods and the leaves. It is used in aromatherapy and is known to help reduce weight as well as anxiety,” Cabutihan Jr. said.

His interest in gardening was brought about by his late father, who taught him the basics of growing plants as well as how to make a profit from it.

Apart from a vanilla garden, he also manages a hydroponics garden in his house where he grows vegetables like kale, kangkong, lettuce, and a bit of fruit.

For Cabutihan Jr., gardening is a comforting hobby that also challenges him as he deals with complicated species that many are used to growing in their home gardens. Through determination, he believes it to be rewarding as his garden continuously bears fruit and profit.