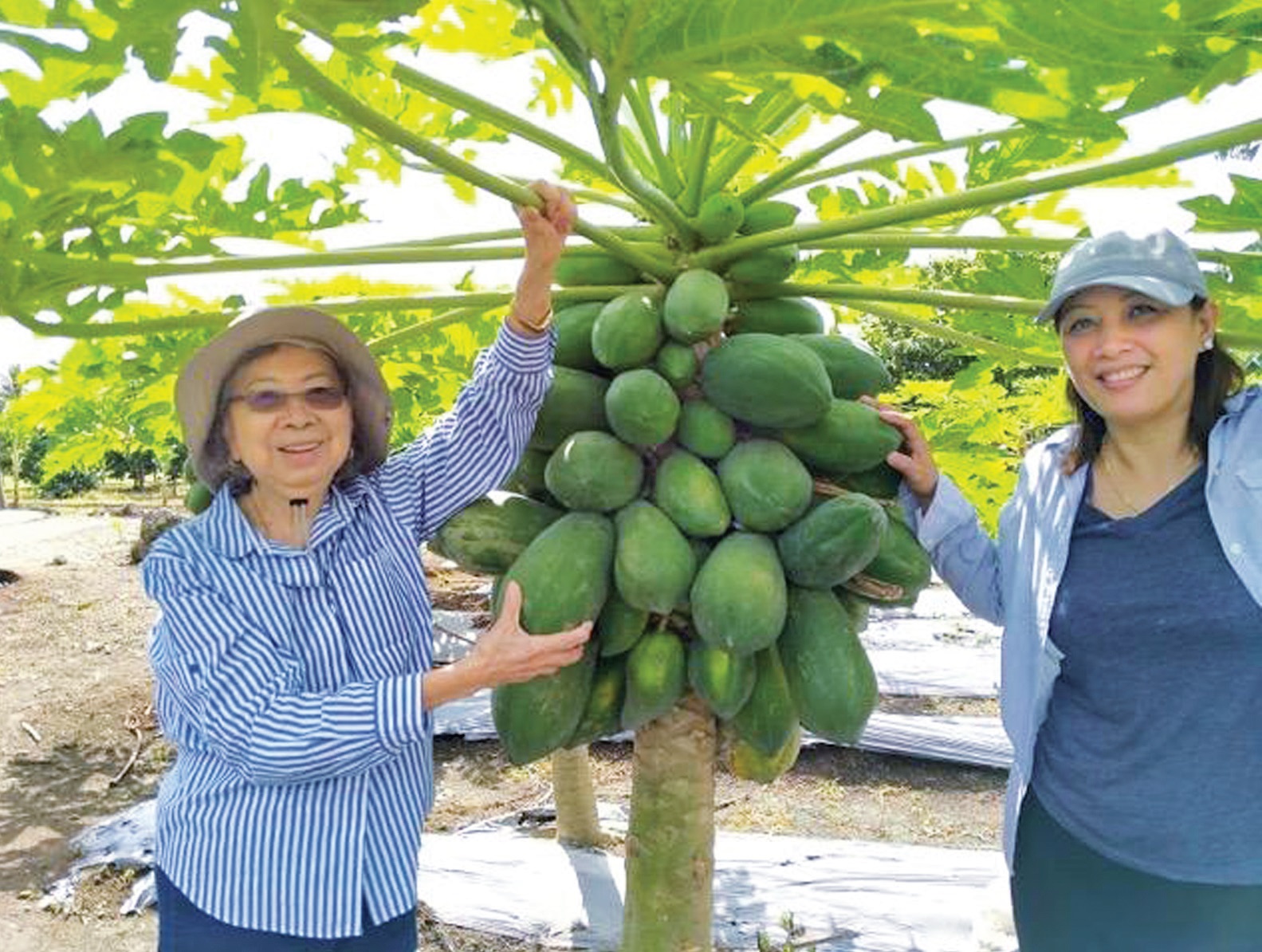 During the first batch of papaya, they had more fruits than they could handle so they gave away as many as they could and sell whatever they could.

When Mrs. Milagros Yee retired from her business at 80, she decided to go into what she calls “pleasure farming.” Today, at 88 she is up and about, extremely enjoying growing guyabano, dwarf papaya, lime, pomelo, passion fruit vegetables and more on her 2.7-hectare farm in Lipa City.

She is ably assisted by Carol, her all around assistant who is very meticulous in planning
what to plant at a given season and making records, just like an honest-to-goodness business operation. Mrs. Yee does not really mind, however, whether the farm makes money or not. Her son, who has taken over management of the company she started, told her not to worry about expenses in the farm as long as that makes her happy.

Mrs. Yee chuckles when she recounts her memorable experiences in farming. It happened that Carol got carried away in ordering 2,000 ready-to-plant hybrid papaya seedlings in 2016. On top of that, she also ordered 1,960 seedlings of hot chili, which they planted beside the papaya trees. 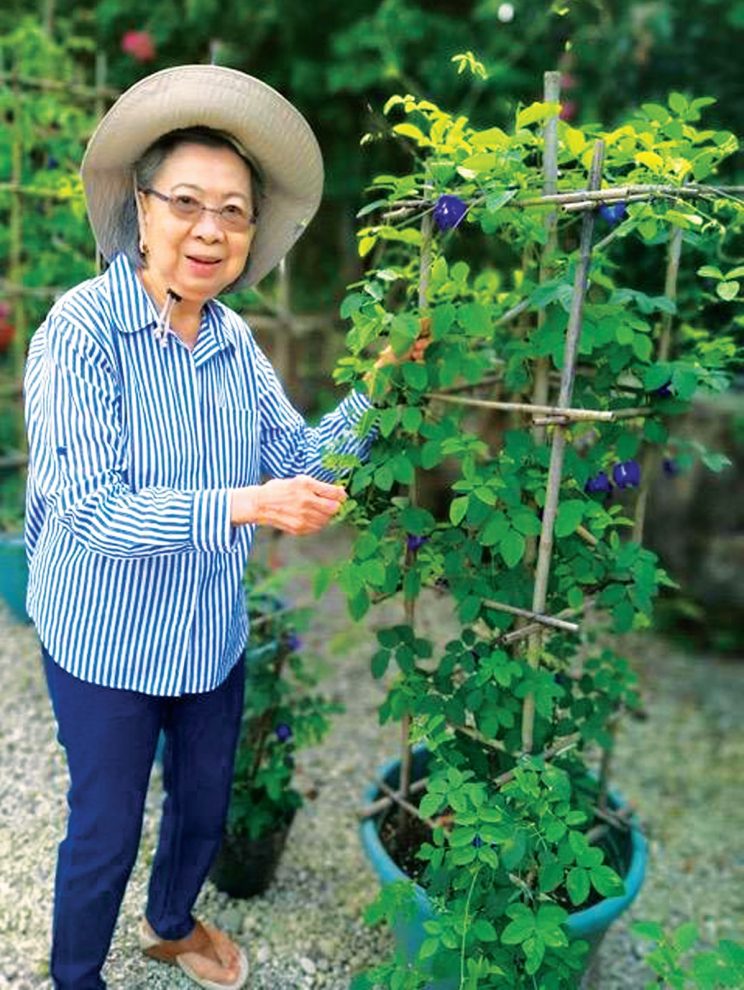 Yee posing with Blue Ternate in a container.

What was the result? The papayas were so fruitful that they had more fruits than they could handle. Anyway, they gave away as many as they could to friends and relatives. They also tried to sell as much as they could, with Carol taking charge of looking for buyers.

How about the chili? It was also beyond their expectations. The
chilies were so fruitful, they had to hire pickers who they paid
P10 per kilo. Unfortunately, the price was so low compared to prices when the supply is low. For instance, a kilo could fetch
as much as P1,000 per kilo or even more during other seasons.
Carol said the processor who bought their chili paid only P40
per kilo, which meant a very small margin. The next year, they no longer planted hot chili, just like many other farmers. And then there was shortage in 2018 and so the price soared to P800 per kilo, but they had nothing to sell.

In 2018, when they planted their second batch of papaya, they were more prudent. Carol ordered only 900 seedlings which were heavily laden with fruits during our visit on November 5. Carol has now regular buyers at P40 per kilo. Mrs. Yee is of course very happy, although making a profit is not her main goal.

When we commented on the very healthy and profusely blooming Blue Ternate (Clitorea ternatea) growing in containers, Mrs. Yee said the original plant was a gift from Sister Eppie Brasil, the founder of Regina RICA (Rosarii Institute for Contemplation in Asia) based in Tanay, Rizal. She said Carol was able to make an organic growing medium that’s responsible for the plants’ good growth. Now, they are multiplying the plant by seed. The blue flowers are prized for making tea and are also used as edible decor in salads. When added to rice being cooked, the result will be blue rice.

Mrs. Yee is very thankful to the regional director of the Department of Agriculture who helped her when she started to develop her farm. She bought the farm about 20 years earlier with some old coconut trees and nothing else. She left it under the care of a farmer under the condition that he would not allow any informal settlers to settle there. The caretaker would keep whatever he produced from the property. Unfortunately, the caretaker died in an accident. 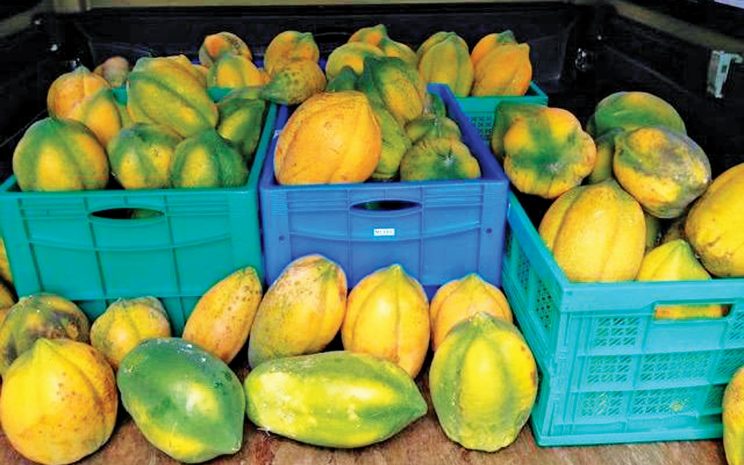 During the first batch of papaya, they had more fruits than they could handle so they gave away as many as they could and sell whatever they could.

Mrs. Yee sought the help of the DA, who lent her the use of the government tractor to clear and plow the land. She was told to plant mungo and peanut for a start because these will improve the fertility of the land. She was given 10 kilos of mungo and another 10 kilos of peanut for planting. She said she was able to return the same amount of seeds from their harvest.

The DA also gave her 300 guyabano seedlings which are now three years old in the field, growing very well with some just starting to bear fruit. Because the guyabano trees are so robust, she expects to reap bumper crops in the coming years. Aside from papayas and guyabano, Mrs. Yee has other plants like pomelo, a prolific lime, calamansi, passion fruit, bananas, cassava, and different kinds of vegetables.

Here’s how Carol prepares her unique organic fertilizer that promotes fast and healthy growth of their crops like the 300 three-year-old guyabano trees that are so robust and disease-free. This is actually a mixture of fermented eggshell and old chicken manure.

An excavation is made in the ground where the eggshells are buried for four to five months. The eggshells are sprayed with EM (effective microorganisms) to hasten fermentation and decomposition. For each batch, 20 big pails (balde) of eggshells are buried in the ground. Eggshells are no problem for Carol because her boss has a big bakeshop which uses thousands of eggs daily. Fifty sacks of manure (bought at P15 per sack) are mixed with the decomposed eggshell and used to nourish the various crops at the Pleasure Farm. 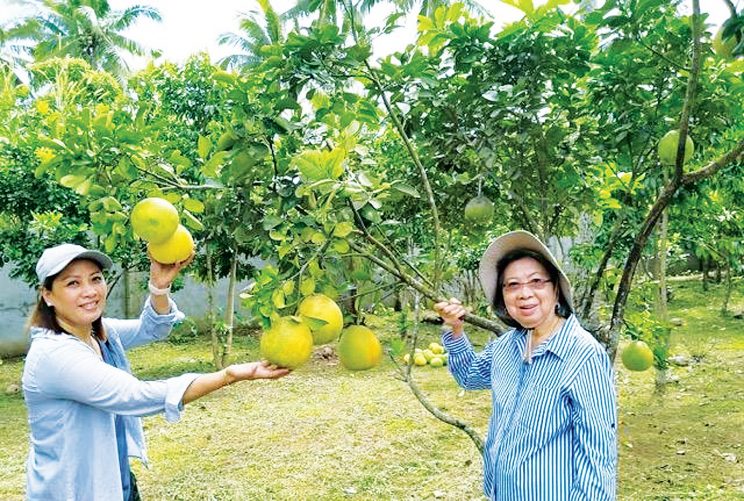 The farm is kept very clean, spic and span, although there are only two permanent farm workers. A former carpenter, Ramir Peñaredondo, is the chief farm employee. Outside workers are called whenever they are needed to do weeding and other chores like harvesting fruits.

Raising rabbits can be a low cost but profitable business