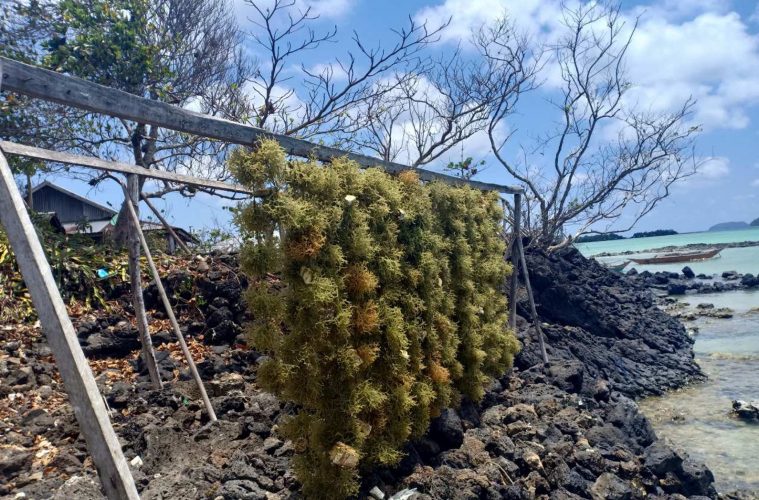 Filipinos have always prided themselves on being an agricultural country with numerous land and marine resources. And yet, only a select few know about the bounty that can be harvested from our waters.

W Hydrocolloids, Inc. is one of the biggest exporters of seaweed products in the country. Its Rico Carrageenan brand is an essential ingredient in food and beverage processing, pharmaceuticals, cosmetics, and other non-food applications like pet food and air freshener. It is part of the W Group Inc., a holding company that includes W Landmark, Inc., which handles real estate.

“We have 7,000+ islands and the best thing to do is to go to the sea,” says W Group co-founder and vice chair Dr. Rosalind Wee. She adds that the Philippines is lucky because not every country can grow Eucheuma, the kind of seaweed needed, and even then, only certain parts of the Philippines can grow it successfully. 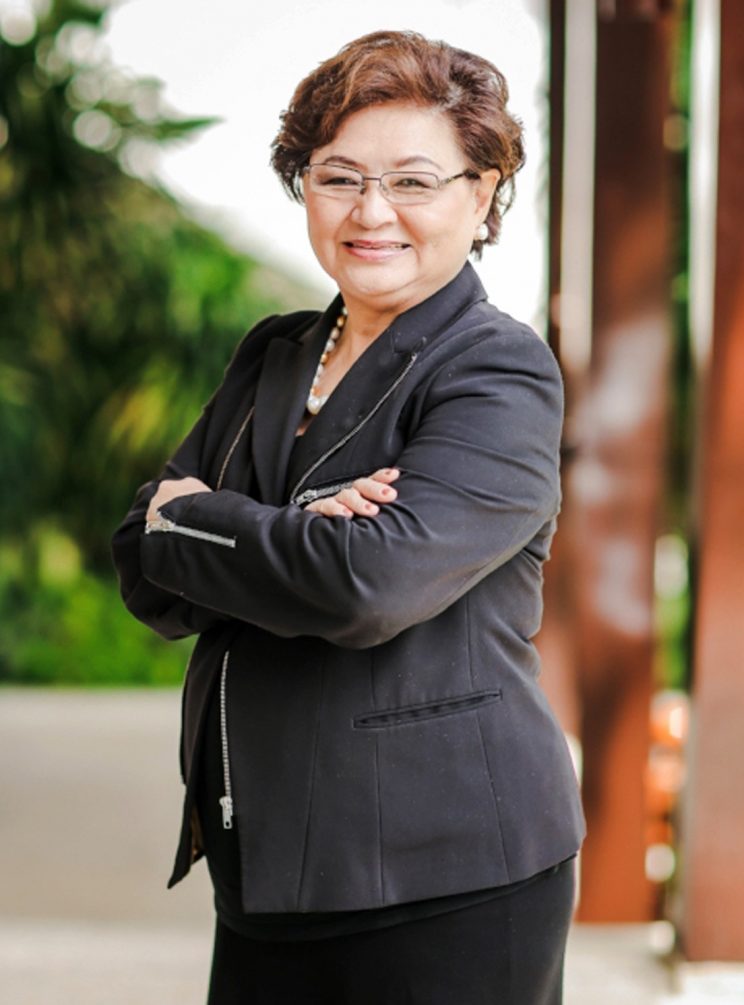 Rosalind Wee, a former schoolteacher from Jolo, Sulu helped found what is now one of the biggest seaweed exporting firms in the country.

Eucheuma is one of the fastest growing species of seaweeds. It is cultivated in areas with rocky to sandy seafloor and slow to moderate water movement. “Not all places in the Philippines can culture carrageenan,” Wee explains. “You cannot grow it in places with big waves. It should be with lesser waves and shallow, but not so shallow so that when it goes low tide, the seaweeds are still covered. And it needs sunlight for it to grow.”

There are three types of eucheuma, but the particular species grown is Eucheuma cottonii, also called guso. “Places where they can culture is the Sulu sea and lately in Bohol and also in Palawan,” Wee says.

Cultivating seaweed used to take three months, but now they can be harvested in 45 days. “But we tell the farmers, ‘don’t harvest it yet. Let it grow more. Let it be more mature so we can get more gel out of it.’”

The seaweed is used to make carrageenan, a food binder, stabilizer, and gelling agent. Carrageenan is an important ingredient in food items such as hotdogs, sausages, ice creams, cheese, beer, and jellies, as well as in pharmaceuticals, pet food, and other applications. There are three commercial classifications: kappa (strong gels), iota (soft gels), and lambda (does not gel and is used as a thickener). The company produces kappa and iota.

How did Wee, a former schoolteacher, find herself in agriculture? “Because there was a big demand,” she says.

The schoolteacher from Jolo

Wee grew up in Jolo, Sulu. She was a schoolteacher who taught math, chemistry, physics, geometry, trigonometry, and music. When the peace and order situation in Jolo became unstable, she was sent to Manila, where she continued to teach. 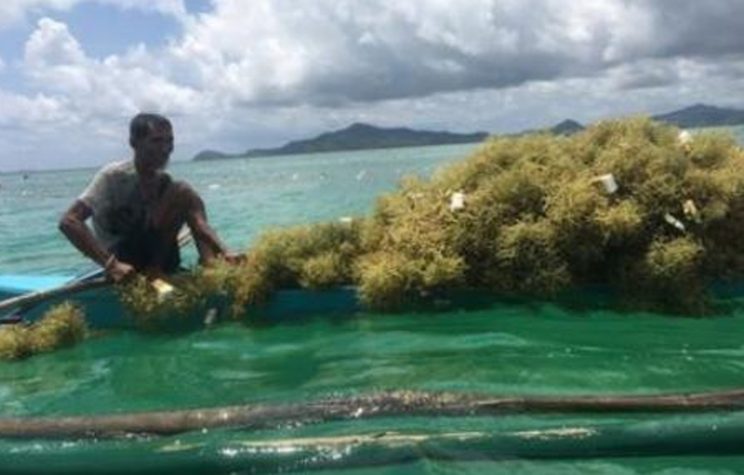 At that time, her husband, Lee Hiong Wee, was a physics professor in Mapua. He also sold bangus in Divisoria. The couple also had a movie booking business for Cotabato City and Lebac, both in Cotabato, as well as Angeles City, Pampanga and Olongapo City, Zambales.

One day, the couple was approached by a professor from the University of Hawaii who was looking for a local supplier of Eucheuma cottonii. The professor explained that they were having problems with their supply of Chondrus crispus, also called Irish moss, which they cultivated in Nova Scotia, Canada, and so were searching for new suppliers. He believed that the Philippines could be a viable source for Eucheuma cottonii, which shared similar properties. “They approached us because we were in the marine product business,” Wee explains. “I’m from Jolo, Sulu, so it was easy (for me).”

They scouted for places where the seaweed could be farmed. “They taught us that if you can see wild ones (in the area), it means you can plant there,” she says. The first farm they worked with was in Calatagan in Batangas. The second one was in Bongao, Tawi Tawi, near the Celebes Sea. “Until now, the best quality is from Bongao because of the sea,” Wee says.

Eucheuma cottonii is farmed by tying seedlings to pieces of plastic twine which are hung low on the sea, leaving the seaweed to grow. “There should be no fishpond (nearby) because the fish will eat the seaweed,” Wee says.

The seaweed is harvested, dried, and sold to a middleman who takes care of volume and transportation. The product should be free from impurities, so drying on bare sand is discouraged. Farmers are taught the best ways to cultivate and dry the seaweed so that the best quality product is ensured.

“We went to Cuyo island, Palawan. Cuyo island has a very good practice. They hang it like clothes so that it will be very clean. The more we see them, the more we teach them how to dry it for good quality,” Wee says.

Working with seaweed farmers isn’t just a matter of buying their harvest. Wee explains that it’s also about uplifting their way of life. One of the ways they encouraged this was by helping the farmers form cooperatives. A co-op is helpful especially because there are no banks on these islands. “I said cooperatives will help you because the government is part of it. We encourage them for places with no banks where we couldn’t send money,” she says.

The first batch of seeds were supplied by the Bureau of Fisheries and Aquatic Resources (BFAR). Later, some farmers began to specialize in selling seedlings instead of cultivating seaweed. One seedling can be harvested twice before it has to be replaced.

A processing plant of one’s own

Initially, the seaweed was shipped to France and America to be processed. They were shipping out thousands of tons a year, which led Wee to wonder why the product was in such demand. She began researching about what made seaweed so valuable. A visit to the International Food Technology exhibit in Chicago in 1975 introduced her to carrageenan and its many uses. She immediately saw an opportunity and wanted to produce carrageenan in the Philippines, but there was one problem: nobody would teach her how to do it. “Why? Because the raw material is here in the Philippines. Because if we can process it, we can sell it cheaper than they do, because they buy (raw materials) from us,” she says.

The opportunity arrived when they hosted someone from JAICA (Japan International Cooperation Agency). At that time, the agency had a project for retired Japanese citizens who wanted to stay in the workforce. The guy the Wees hosted asked to be posted to the Philippines simply because he wanted to play golf. “That’s why I had to learn to play golf, because I had to go with him. I think at that time, he was already 70 years old, retired. He was the one who taught us how to process it,” Wee says.

Now they had the knowledge, what they needed was up-to-date processing machinery. They partnered with a multinational food processing company and in 1985, they put up the most modern carrageenan processing plant in Canlubang, Laguna. The agreement was that they would supply the carrageenan and their partner would buy everything. They ensured steady business by making sure there was a buyer before they put up the plant.

It wasn’t all smooth sailing. Wee tells of a time when a big client decided to stop buying from them. “We had farmers that you should buy from them because if you don’t buy from them, they will not plant anymore. So we bought everything, even if we had no buyer.” Their quality was unmatched, so their client ended up coming back and they were able to sell the seaweed, which they had bought at 25 centavos a kilo, for R4 a kilo.

“We risked buying all the cheap ones from the farmers because if we don’t, they will not have confidence in us anymore. So when (the client) started buying (from us again), the farmers were also happy because the price went up again. That was 40 years ago,” Wee says. “I always tell people, don’t run after money. Money will come to you. If you run after money, you’ll fall. You’ll not succeed. But of course, you have to work. God helps those who help themselves.”

Quality is an essential part of carrageenan production, and it starts with the farmers. “Seaweed is a natural product. Every time you process it, different quality comes out. So it always has to go through the laboratory to test the gel strength. It is the gel strength that counts in the carrageenan. If the seaweed harvest is not good, the gel strength is low. But there are other places where they’re high, so we blend it to standard(ize) gel strength,” Wee explains.

The price of the carrageenan differs depending on market prices and where it will be sent. The company exports about 20 million kilos a year, about 20,000 tons, to countries including Germany, England, USA, Chile, Argentina, Brazil, and Korea.

They have managed to keep and grow their clientele throughout the years because of their commitment to quality. One of their strategies is to test for quality using laboratory equipment from their customers for consistent results. “They send all the equipment to us so we can test it in the Philippines… and if the quality is not good, they can tell us. This shortens (turnaround) time,” Wee says.

Dr. Rosalind Wee isn’t just a successful businessperson. Her heart has always been about equipping people with the skills to help themselves. “Education is very important. We should tell them if you don’t go into agriculture, your future will be nothing. Your children will have no food to eat anymore,” she says.

A brain tumor operation years ago left her legally blind, with only 25% vision in both eyes, but this hasn’t stopped her from being involved in organizations such as the Quezon City Chapter of the Philippine Red Cross, Go Negosyo (where she is currently on the Board of Directors), and the Philippine Federation of Local Councils of Women. She’s also an actress, having appeared in Mano Po 7: Chinoy, This Time I’ll be Sweeter and Open, an entry to this year’s Pista ng Pelikulang Pilipino.

She has won awards for her many endeavors, including the 2009 Pearl Buck International Woman of the Year (also received by Audrey Hepburn in 1993, Pres. Cory Aquino in 1995, Aung San Suu Kyi in 1997, Hillary Clinton in 1999, and Laura Bush in 2006) and Go Negosyo’s Inspiring Filipina Entrepreneur.

“Actually, before Go Negosyo came up, I was already going to a lot of provinces and teaching women. My 11th commandment is ‘thou shalt not be poor.’ If you’re poor, then you’ll be at the mercy of your husband. He (may) abuse you. But if you have your own money, if you go into business, you can tell your husband bye bye!” she says.

Wee and her partners aren’t stingy with their technology. She currently divides her time between Manila and Jakarta, where her husband is serving as Ambassador to Indonesia. She’s involved in a program to teach seaweed cultivation and processing to Indonesians. “We’re not secretive, we teach people. We told them, don’t go into research anymore. We came from that. We’ll teach you right away,” she says.

She is very concerned about climate change, and believes that education is important in helping to mitigate it. “We are educating the people that there will be a time that will come that they have to prepare,” she says.

W Hydrocolloids, Inc. is a story of people who worked hard, saw an opportunity, and took it.

Wee is very grateful for the bounty of the sea and how it has helped not just her family, but many farmers who live by the coast as well. “As long as we can get seaweed, (we’ll be here),” she says. (Photos courtesy of Rosalind Wee)