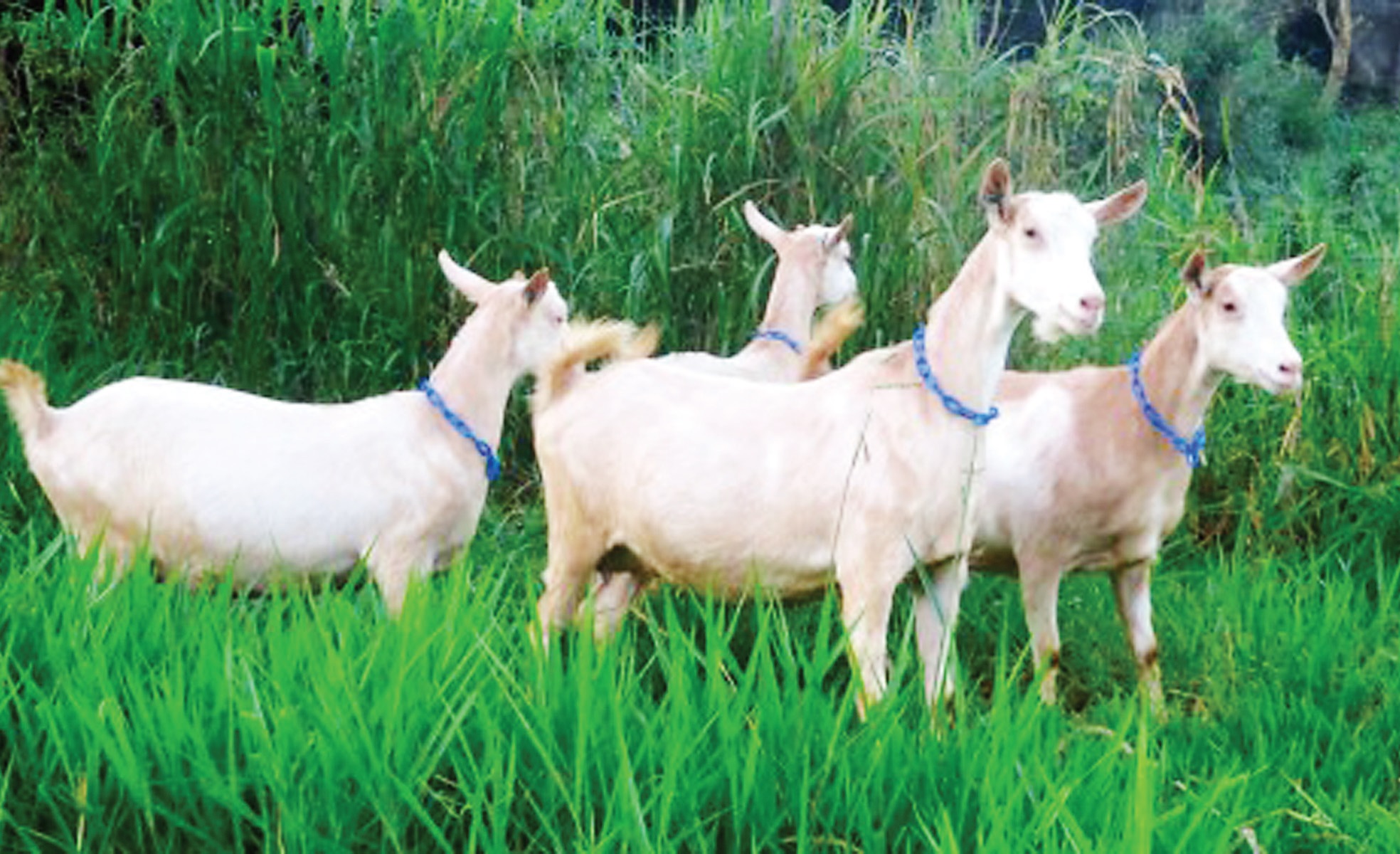 On December 31, 2018, purebred Saanen goat sired by a Nubian buck at the Alaminos Goat Farm in Alaminos, Laguna, gave birth to six kids, tying the Guinness World Record of a goat giving birth to sextuplets. Moreover, from November 2018 to February 2019, AGF had recorded 32 sets of triplets. That’s no mean feat for a dairy goat farm in the Philippines because most goats give birth to only one to two kids at a time. 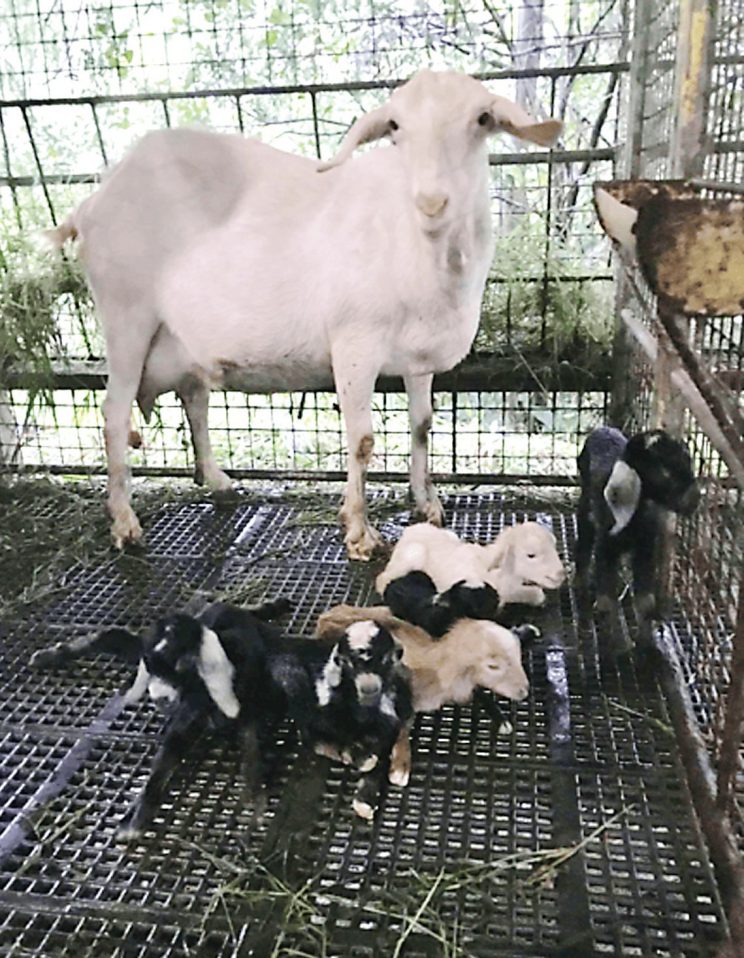 The Saanen breeder that gave birth to six kids on
December 31, 2018, tying the Guiness World Record
of a goat giving birth to sextuplets.

The Alaminos Goat Farm was established in 2005 by the late Valeriano “Rene” L. Almeda, which he managed with the help of his two sons, Art and Toti. It is acknowledged as the most successful dairy goat farm in the Philippines today.

The sextuplets and the 32 sets of triplets, no doubt, are in a big way the product of superior genetics. Rene, who died on January 11, 2019, did not mind paying a very high price for a superior breeder, whether male or female. We remember him telling us he had to pay $4,000 for an outstanding Anglo Nubian buck from the United States that also cost him another thousand dollars for airfreight. That was how serious he was in paying attention to the importance of genetics.

Rene was a staunch believer in hybrid vigor. That is why he and son Art started early what they call the Alaminos Anglo Dairy Line (AADL) & Anglo-Saanen Crosses. Rene was right. They have proven that crossing the purebred Australian Saanen female with a purebred Anglo Nubian buck produced progenies more adaptable and productive under the wet and dry season condition in the tropics.

According to Art, the crosses have been consistently delivering good amount of milk in the last ten years. The average milk yield per goat is two liters per day. There are, however, top performers which deliver 3 to 4 liters a day. Ex-farm, the fresh milk sells
at P140 per liter. The bulk of the milk is bottled and sold fresh through supermarkets and other outlets. A smaller percentage is made into cheese (kesong puti) and goat’s milk ice cream. Toti, who is in charge of marketing, says that in earlier years, the bulk of the sales was concentrated in Chinatown (Binondo) in Manila. Today, however, he says that many Filipino non-Chinese have learned to love drinking fresh goat’s milk, too. By the way, in 2008, AGF made history when its milk was the first FDA-approved fresh goat’s milk to enter the supermarket trade.

Another important factor in achieving success in dairy goat farming, according to Rene, is balanced nutrition at an affordable cost. Rene and his sons had a creative strategy in cutting feed cost for their goats (both adult and juvenile), many of them confined in comfortable quarters above ground. Sixty percent of the animals’ daily diet comes from the farm’s Salad Garden, which consists of 30 big plots planted to Indigofera, mulberry, napier, malunggay, and Centrosema, a vine legume. The forage crops are harvested every day from each plot and fed to the confined animals. Forty percent of the daily diet, on the other hand, is pelleted concentrates, 30% of which is powdered Indigofera leaves. The daily ration costs much less than when all the feeds consist of concentrates. The milk goats are given 1.2 kilos of pellets and 1.8 kilos of green forage each day costing less than P20.

The main ingredient of the pellets is leafmeal of Indigofera zollingeriana, a tree legume that is hardy and productive. In an interview with Rene a few years back, what he considered as his solid contribution to goat raising in the Philippines (not only dairy breeds) is their pioneering work in creating awareness about Indigofera as a nutritious forage. He once disclosed to us that many of the livestock experts in the government ignored Indigofera, saying that it is tough and not palatable to the animals. 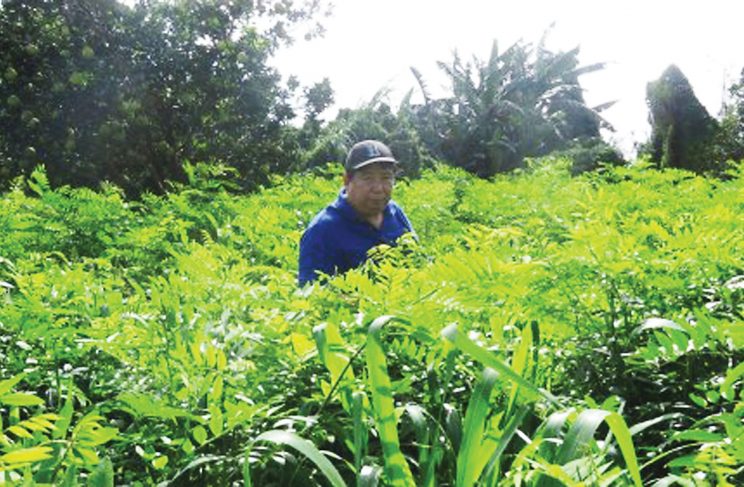 Almeda in the Salad Garden for goats.

Because Rene found in his research that Indigofera had high protein content, he persisted in promoting the legume as goat feed. By a streak of good luck, he discovered that Indigofera can be palatable after all. It happened that they had a shortage of forage at AGF one time. That prompted the farm worker to harvest the new growth of leafy twigs. They then observed that the animals liked the young leaves very much. And so they have established that if you cut the twigs every 45 days, the animals will love eating
them. Eventually, Indigofera was listed as one of the recommended green forage for goats by PCAARRD.

As one of his legacies, Rene wanted to show that Dairy Goat Farming is a feasible and profitable venture in the countryside. That is why he and his sons had active participation in long term programs of government agencies to promote and share doable technologies they had gained in the course of operating AGF. Before Rene died, Alaminos Goat Farm partnered with the Department of Agriculture RFO 8 Tacloban City by supplying Malitbog Goat Center in Leyte with AGF dairy goats for them to breed. Todate (May 10), Alaminos has delivered 70 dairy goats to Malitbog with the final 30 head to be delivered in October 2019. The Center disperses the breeder goats for the farmers to raise after proper training. The good news, according to Art, is that the
Center is now processing the fresh goat’s milk produced by the farmers.

As of May 2019, AGF is home to 600 goats, both dairy and meat type. These consist of 100 Saanens, 150 Nubians, 200 Dairy Crosses, 100 Boers and Oberhasli, and counting. The AGF production and marketing system is now well established, and the brothers, Art and Toti, are very confident that the goat dairy farm started by their father will continue to grow and innovate.

The healing power of medicinal plants