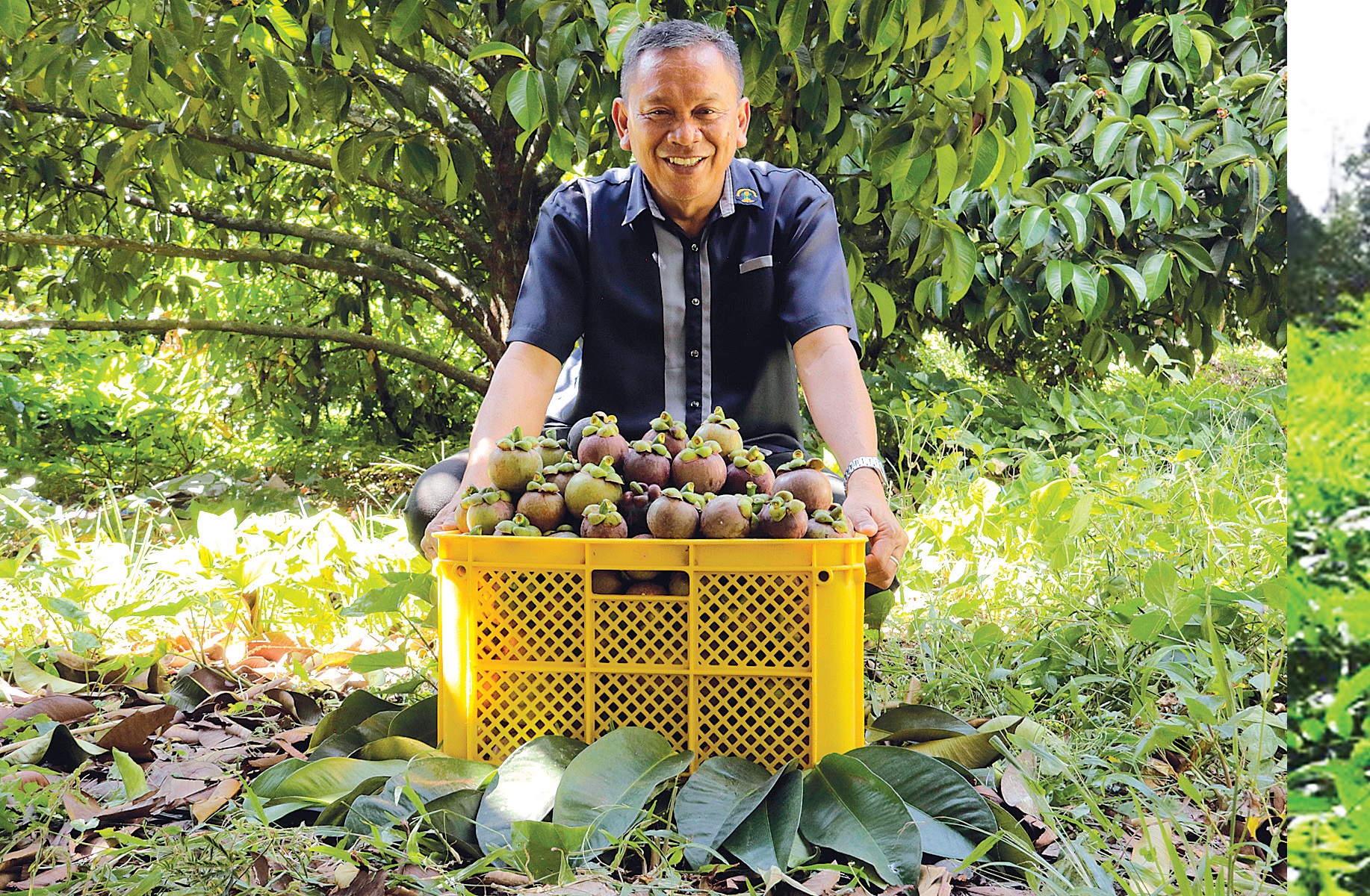 Summer is a favorite season to many for the warm vibes it brings, the longer days to spend outdoors, and time to crave for those mouth-watering fruits to keep energized and hydrated.

Davao Region, being the country’s fruit basket, is one of the preferred summer destinations. But at this time, not all the delectable fruits are in abundance, and mangosteen, the “queen of fruits,” is one of them. 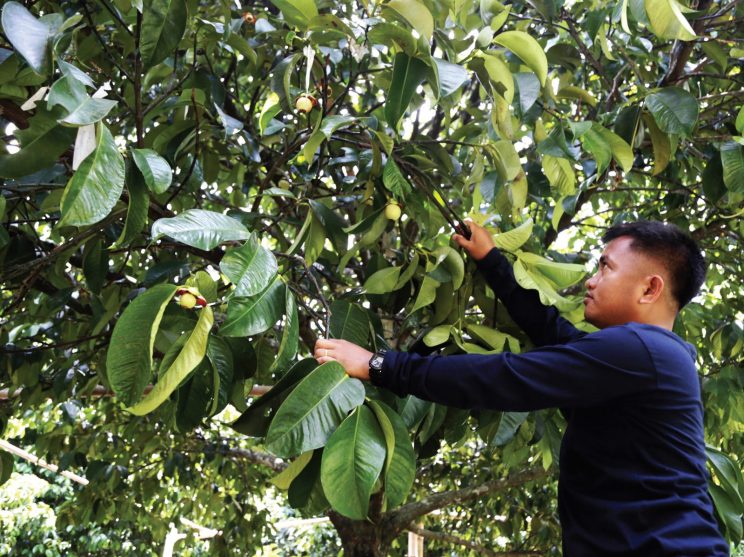 Tourists and local consumers can rarely find them, and if they do, they have to shell out hard earned money of at least R250 per kilo. While during the recent Davao’s Kadayawan festivities, when tropical fruits are usually abundant, mangosteen’s price ranges only from P25-P35 per kilo.

Mangosteen is in season from August to October only, but the demand for the fruit is higher in the first half of the year. Apart from summer, it is a sought-after fruit for offering during New Year and Chinese New Year celebration, as it’s well rounded-shape is believed to symbolize money, while its striking deep reddish-purple color is believed to attract wealth. No wonder, the fruit is even sold as high as P50 a piece.

Who could be luckier than our farmers if they could take advantage of the fruit’s high demand and command in price?

Thanks to the breakthrough technology on off-season mangosteen production as farmers can now plan their production; moreso, tourists and consumers, can enjoy the fruit’s unique tangy taste, juicy flesh, and medicinal benefits year round at reasonable price.

The idea of producing off-season production did not happen in a snap. It is a product of years of scientific research of the Department of Agriculture-Davao Agricultural Research Central Experiment Station (DA-DARCES) in Manambulan, Tugbok District, Davao City.

DARCES, through the study “Development of Package of Technology for Off-Season Mangosteen Production,” is funded by the Bureau of Agricultural Research.

DARCES Chief Agapito Regulacion said a rain shelter was installed above the mangosteen trees to test its efficacy to induce fruit flowering. Previous technologies in flower induction in other fruits were also considered, which include pruning, bark ringing, plastic mulching, and chemical application, particularly Paclobutrazol.

“Of all the treatments, only trees with rain shelter induced flowering from 60 days after treatment, with all its upper branches having high flowering induction at 95% and 30% in its lower branches,” said Regulacion, who is also the study leader.

“This implies that high temperature and water stress triggered the mangosteen trees to induce flowers, especially at the upper portion of the trees where the temperature is high. 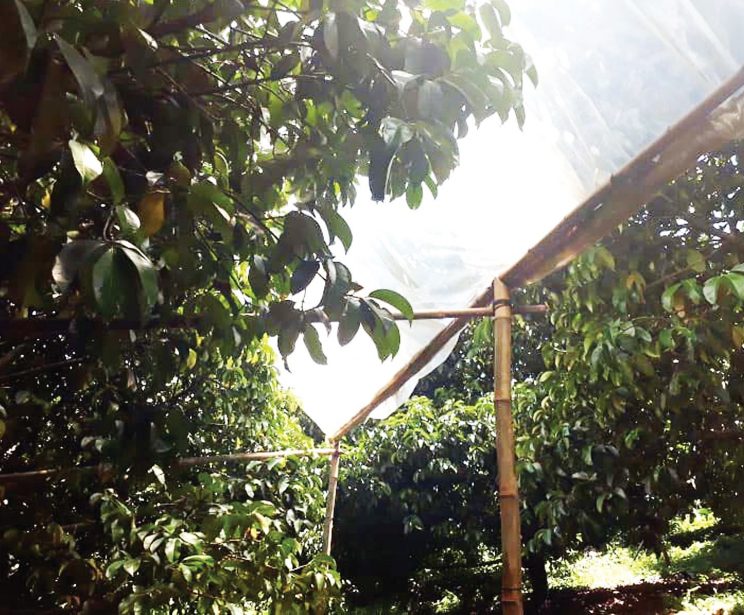 The microclimate inside the rain shelter was controlled, resulting in a drought and higher temperature condition that triggered the trees to induce flowers after 60 days of stress period,” he said, adding:

“In the same period, there’s an accumulation of carbohydrates at the apical part that enhances the flower to bud break.”

Although the yield of the trees is lower in the off-season, farmers can still earn seven times more since mangosteen at this time is priced higher due to its low supply.

“Off-season mangosteen production, through the establishment of rain shelter, is a profitable technology as it can enable farmers to schedule their production and take advantage of the high price during lean months,” Regulacion said.

To adopt this technology, a farmer should invest in a rain shelter and an appropriate drainage system to be successful in producing off-season fruits. Based on the study, a one-hectare farm should have an investment of about P1-Million. This may be a huge investment at the start but can be overcome by a return on investment (ROI) of at least 125% on its first year.

The off-season production technology gives the potential for a mangosteen tree to yield at least 25kg/tree at P250/kg. A one-hectare mangosteen farm with a planting distance of 10 x 5 square meters will produce around 5 metric tons on its first year alone. It will have a gross sales of P1,250,000 at P250/kilo (off-season price), thus a farmer will have an initial net income of P250,000 on the first year.

The rain shelter structure could last up to five years, thus on the second year, a farmer can still make use of the structure without the installation cost and can then enjoy at least P1,200,000 net income until the fifth year.

Another benefit of this technology is that “induced flowering through stress method minimizes the use of chemicals which does not only reduce operating cost but also promotes sustainable farming,” he said.

DA Regional Director Ricardo Oñate said the technology is a welcome development to both farmers and consumers. “Farmers can earn more from continuous production, while consumers can enjoy the fruit’s abundance at a reasonable price,” he said.

“Farmers who are interested to adopt this technology but with less financing capacity can still apply it using smaller portion of their farms and may expand on the succeeding years once they get the return on their investment from the technology,” Oñate said.

Now, mangosteen will not only reign as the queen of fruits, but also the fruit for all seasons, not by magic but through science.