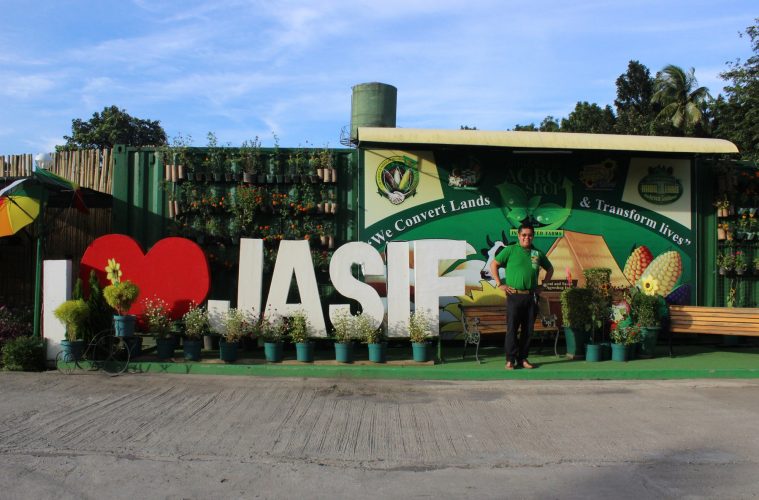 As a Sagittarius born on November 23rd, Jonathan “Joni” Sanchez is well known for being adventurous, positive, and direct. By doing many sorts of blue collar jobs – that is from being a janitor, messenger, tricycle driver, “pulot” boy in a tennis court, cigarette vendor, and kitchen boy during his younger years, this 50-year old did not wane on hope that someday, he will become successful in life.

True enough, Sanchez is now reaping the rewards of his positivity and determination, packed with faith to the Heavenly Father, through Joni & Susan Agroshop and Integrated Farm (JASIF).

From salesman to urban gardener

Nine years ago, Sanchez used to sell soil conditioner from an agri chemicals company. Since he did not have a farm himself, which would enable him to give factual testimonies to the products he was selling at that time, his prospective buyers were hesitant to patronize his products. 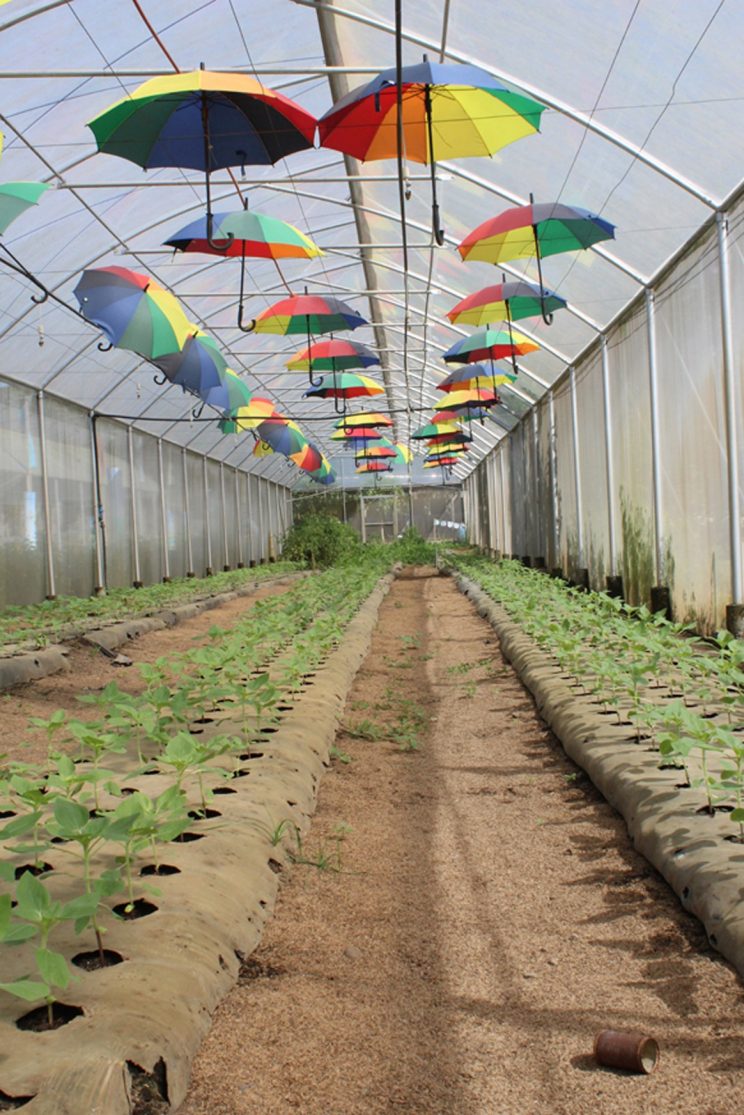 Colorful umbrellas inside the greenhouse facilities in the farm serve as additional attraction among guests.

Lacking in space to start a farm, Sanchez thought of planting leafy vegetables in small containers such as in discarded plastic cups and soda bottles which he cut into half, enough for him to apply the products he was selling. Everything went well (thanks to the farmers, farm owners, businessmen, and other agriculture-related institutions and agencies from whom he learned the basics of farming from due to his frequent visits because of the products he’s offering) until he was able to appreciate the benefits of planting his own vegetables at home and maximize the use of small spaces for container gardening, which eventually became a hobby for him.

Eventually, Sanchez made use of social media to post photos of his home garden and products. People who saw the photos became interested in them so they went and visited Sanchez and purchased naturally-produced vegetables from him. The earnings he got inspired and fueled the entrepreneurial spirit in him to then convert his hobby into an urban gardening business which he named after him and his wife: the Joni and Susan Agrofarm.

He initially rented a 400-square meter lot in the middle of a subdivision in San Pablo City to become his urban farm, complete with bahay kubo as his office and store. There, he stocked seeds and other farm products for people to purchase, aside from the produce of his own farm where he launched a “Pick and Pay” scheme to attract visitors. Gradually, Sanchez was able to develop his farm from 400 square meters to 900 square meters. He also started receiving inquiries and giving consultations on how to start an urban garden set up. These commenced the land conversion business and plantation programs of the company.

With the tagline, “We convert lands and transform lives,” the company has so far converted almost 300 backyard lots in the province of Laguna, including idle school grounds, into urban gardens. Giving importance to the health and nutritional value of the plants being grown, they introduced a farm-to-table concept planting pechay, mustasa, siling panigang, and others. All the materials and manpower, as well as the training needed in order to sustain an urban garden, were provided by Joni and Susan Agrofarm.

Incidentally, Sanchez’s “Gulayan sa Paaralan” advocacy started upon seeing the school garden’s importance in the student’s appreciation of growing and eating the right kinds of food, plus the value of recycling. Here, students learn how to cultivate, maintain, and grow plants and vegetables using recycled plastic containers, after which they are also given the opportunity to harvest the different crops they cultivate. 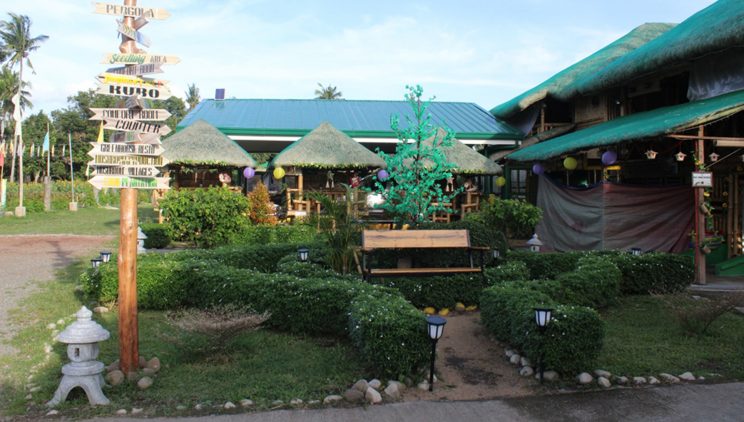 The neat and orderly facilities inside JASIF offer guests a relaxing experience.

Venturing into other farm projects

Slowly, after making considerable profit in container gardening, Sanchez went into other projects such as corn and mushroom production.

Connections from people in the farm business enabled him to venture into business partnerships. One of these is the production of purple corn variety introduced to him by a seed company. Joni and Susan Agrofarm was able to successfully cultivate them in their one-hectare leased property in Laguna and harvest them afterwards in commercial quantities, which gave them substantial profit. And so, they went on to cultivate other varieties such as white (malagkit) and yellow (sweet) corn. Presently, they already have other leased properties planted with corn and sorghum in Tiaong, Nagcarlan, and Candelaria.

Being the innovative farmer that he is, he also maximizes the use of corn wastes and converts them into silage and grains, enough to feed a number of cattle he slowly grazed in his farm.

Another viable project which became profitable for him was the mushroom growing facility which he initially built in a 100 square meter lot alongside his urban garden farm inside the subdivision. Sanchez researched and trained in oyster mushroom production, which became a byword for its money making potential at that time. He mentioned that the earnings he got from his every day harvests from the 10,000 fruiting bags inside the facility were sufficient for his business to maintain income. Thus, he encouraged and inspired other farmers to do the same. He started this off by administering mushroom and corn production seminars, in addition to container gardening seminar which he usually holds since establishing his urban garden farm.

He later on initiated partnership programs for corn plantations and mushroom growing facilities. More of a “patanim” in local parlance, the corn plantation partnership program (CPPP) aims to convert vacant lands into crop producing areas. According to him, the program that has already been running for almost nine years has already provided livelihood opportunities for residents where the farm is located, as well as helped in supplying the rising demand for corn in the market. Sanchez says OFWs (Overseas Filipino Workers) who are interested in farming but do not have the time to personally establish their own farms are mostly his partners. Aside from their regular income abroad, they also have additional income at home.

A façade of The Greenhouse Restaurant that serves farm-to-table food.

On the other hand, in terms of mushroom growing, partners were given the opportunity to either become a sub dealer, sub grower, or a mushroom plantation program partner (MPPP); this is after attending the one-day seminar/training which Sanchez personally administers in his farm. He assures guaranteed income among partners in any of those options. Why? In terms of marketing, Joni and Susan Agrofarm is already one assured buyer. In terms of produce, Joni and Susan Agrofarm uses quality planting materials, thus assuring quality harvests based on their own experience in their own farm.

Located strategically along Maharlika Highway in San Pablo City, Joni and Susan Agrofarm was incorporated into Joni and Susan Agro and Integrated Farm (JASIF) in 2010 as a way to showcase all of the company’s products. It is a 2.5 hectare plot which the company developed as a one-stop shop for cultivating corn and sorghum, mushroom growing and processing facilities, greenhouse facilities for herbs and high-value crops, apiary, cattle raising, hydroponics, sunflower mazes, and The Greenhouse Restaurant. They also offer an ATV (all-terrain vehicle) ride which gives guests a two-hour tour of the farm. Added facilities are a number of bahay kubos, pavilion, function hall, and a kid’s playground called Olivia’s Wonderland to give guests some form of relaxation amid the farm’s bounty.

Sanchez boasts of the farm being the first in the city to grow all-season sunflowers. It has become one of their come-ons among visitors since the view is truly Instagrammable.

They also have their mushroom growing and processing facility on site, where they manufacture mushroom chips in original, cheese, and garlic flavors. These vacuum-packed products have become a hit among farm guests as a healthy snack alternative. Also worth mentioning is their mushroom ice cream, which comes in original, cheese, and chocolate flavors, all of which has an outstanding taste.

With regards to the food being served in The Greenhouse Restaurant, JASIF applies a farm-to-table concept. They make use of oyster mushrooms as a healthy meat-like ingredient to their specialty dishes like sisig, dinakdakan, bacon mushroom carbonara, gourmet mushroom pasta, mushroom cheeseburger with frizzled mushroom, mushroom tupig, and other breakfast meals such as mushroom tapa, tempura, and tocino. The green leafy vegetables planted inside their hydroponics facility are used in salads.

JASIF is also a learning site for Lakbay Aral tours. They were accredited by DepEd as one of the educational tour destinations in the province; here, they give lectures on container gardening, as well as expose student participants to hands-on farming to educate and encourage them to appreciate and start growing their own [healthy] food early in life.

Sanchez has been invited to numerous speaking engagements. Just recently, he was among the Philippine delegates to Korea, being a member of the Philippine Chamber of Commerce representing the private sector. Aside from talking about farming, he also mostly speaks to OFWs about financial literacy, as well as about being living proof of a ‘rags-to-riches’ story. Locally, he was also one of the resource speakers in the Agribusiness Investment Forum during the recent Agrilink trade event at the World Trade Center. Sanchez confides, however, that he is equally fulfilled after sharing his knowledge and skills among other people during these events. That is on top of acquiring additional knowledge for himself from the persons he personally encounters.

Presently, JASIF has 35 workers given free lodging inside the farm. The words of advice he constantly gives to them is, one, that blessings come with hardship, and that time, effort, and passion are equal ingredients to become successful. Also, associating with positive and successful people can attract good vibes for oneself; to learn to innovate and talk to people because learning is a continuous process; and to maximize the blessings given by God and return the favor among workers as a moral obligation. Similarly, as a devout member of the Mormon Church, Sanchez equates his success as a gift from the Heavenly Father; it is the reason why he closes the farm on Sundays (although considered a brisk day for business) to give time for thanksgiving and spiritual enrichment.

In the works is another mushroom processing facility to answer to their plans of commercially-producing mushroom byproducts. In five or 10 years’ time, Sanchez sees JASIF as an agri-theme park – this is, of course, aside from being a DOT (Department of Tourism)-accredited farm tourism site at the moment. He is also into the dealership of the biggest Bigasan ng Bayan outlets in the province where he gets direct supply from rice farmers, thus enabling him to help small farmers, as well as consumers, by selling his grain at a lower price.

For more information, visit Joni and Susan Agroshop and Integrated Farms on Facebook.