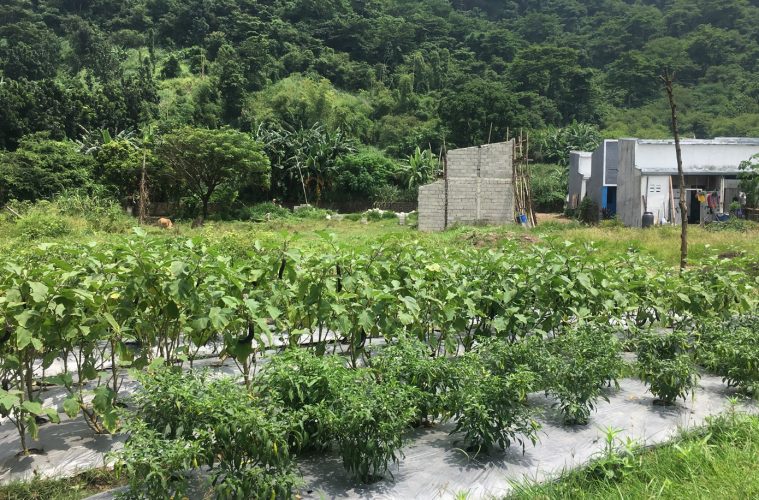 Sometimes, getting a community to consider agriculture as a means of securing food security as well as a viable means of livelihood starts with not just providing them with the infrastructure to begin farming, but also educating them in the many ways they can sell and market their product, as well as grow their business and savings. This is what the World Wide Fund for Nature’s (WWF) Foodshed Farming Enterprise Project aims to do. “The Foodshed Farming Enterprises (FFE) is a technology that we are introducing to periurban (a mix between urban and rural) communities primarily to address food security and sustainable livelihood,” says Moncini Hinay, Project Manager of WWF’s Sustainable Food Systems Program.

The foodshed is a type of greenhouse built from low cost materials like bamboo and anti-UV treated plastic to protect it from the elements. The structure, which resembles a roofed table, measures around 20 sq.m.. It allows for leafy vegetables to be grown on top using a capillary drip irrigation system while up to 50 chickens can be grown underneath on one side, which means one structure, which has two sides, can house a variety of vegetables on top and a total of up to 100 chickens underneath.

“This is a low-cost hydroponic system that can be copied by the farmers and at the same time, is a regenerative agriculture approach, meaning there’s less land tillage,” Hinay says. “And the foodshed in particular doesn’t only produce crops, but it also produces chickens. You have chickens and crops together, and our unique feature for the chicken is they’re being grown in cages by the feeding protocol comprised of a mix of commercial feed and plant-based feeds with no antibiotics, and grown in 40 days, not 20 days. Not spring chickens.” 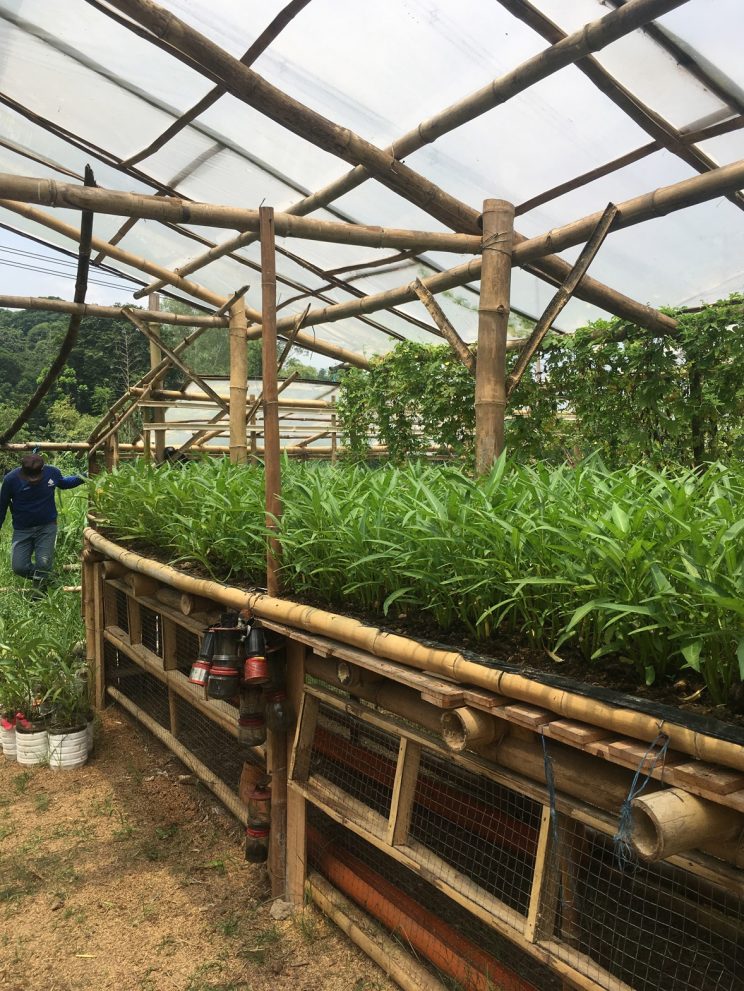 Each foodshed structure is composed of two ‘tables’ on each side with a roof in the middle. The ‘tables’ can hold an assortment of vegetable crops on top planted using a capillary drip system, sort of like low-cost hydroponics, while the bottom half can house up to 50 chickens.

A community in Pililla, Rizal

Featured in this article is a GK (Gawad Kalinga) Federal Land community in Pililia, Rizal, at the foot of Mt. Sembrano. The community was established in July 2017 and is composed of 26 families.

The project is funded by beverage company Pernod Ricard, who requested the collaboration with GK. “(GK) highly recommended this area considering its very good working relationship with the community members, and also the peri-urban setup,” says Hinay, who notes that while the area is near the city, many of its lands have remained rural. “Our main consideration is it must be replicable, modular, cost-efficient, and addresses some of the issues relating to sustainable agri production. We started to develop this model in Negros with BPI Foundation to diversify the income of sugarcane farmers. Now we figured out that if you’re going to introduce this as a food security project for these types of communities, it can address two issues: access to safe and healthy food and opportunity to engage the community in agriculture-based livelihood and sustained livelihood where they are.”

The project, which started in June last year, was built through a bayanihan setup. Employees of Pernod Ricard and GK community members built the structures in three hours. Community members were also trained to cultivate the crops and raise the fowl, both following the organic method of farming. Though WWF and their project partner took care of the initial input, everything else that comes after such as the reseeding, the buying of chicks, and so on is the responsibility of the community.

But just as important was that the community was educated on how to manage and market their business as well. WWF focused on guidance and not dictation, making sure to find out the community’s goals and helping them see how these can be attained. For example, the community decided that they wanted to build capital for a year or two before diving the income generated by the foodshed project. Meanwhile, they have also agreed to start earning by selling harvests of lettuce and chicken. But even this, Hinay says, isn’t the project’s goal. “Our hope is that this is the prototype,” he says. “ We hope that they can replicate this technology if they want to grow their own vegetables. We accounted that more than 50% or 60% of their expenses go to food, so if they have access to food here, they’ll be able to save money.”

The community members designate a representative from each family to work on the project. This is to ensure that everyone has a stake in it. They elected community treasurer, Antia Rausa, 48, as foodshed manager because everyone knew she had a passion for farming; she was already caring for seven garden plots before the project started. 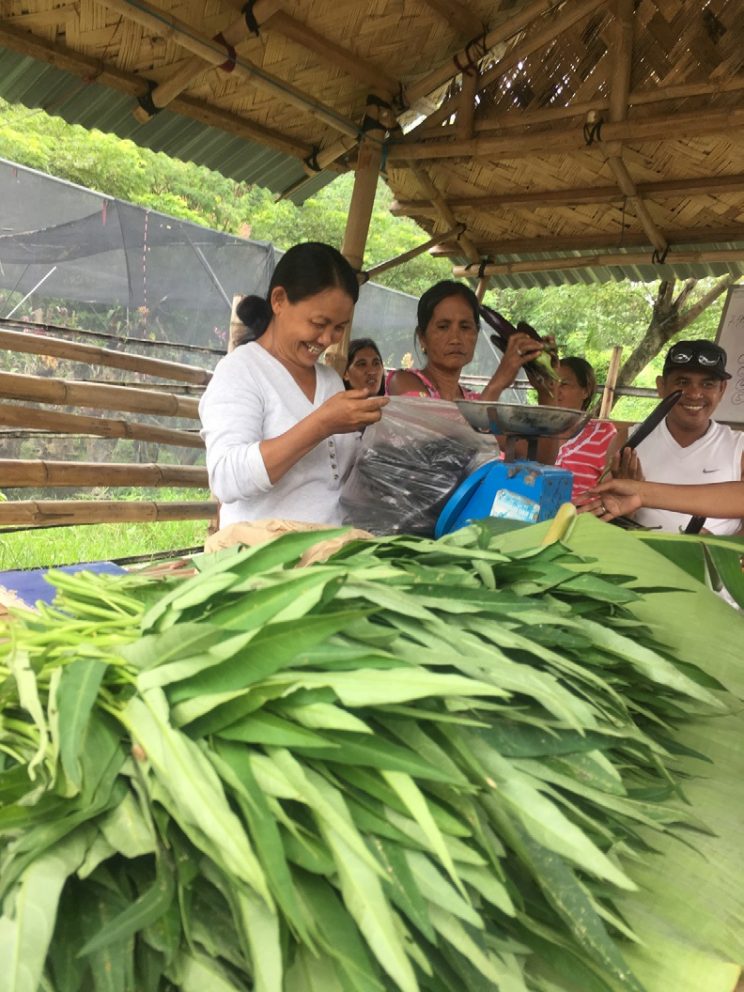 Community members involved in the foodshed weigh and pack their harvest.

Rausa has two boys, currently in grades 10 and six. Her husband is a tricycle driver. She says that the project has been beneficial to her personally because she has had to stay home to care for one of her sons, who is sickly.

Each GK family is entitled to a plot of land for growing their own food. Rausa planted native tomatoes. A neighbor planted squash. Between the 26 families, they have a variety of vegetables for home consumption. This means that all the harvests from the foodshed become profit.

In Tagalog, she lists what they’ve cultivated in the foodshed so far: “We grow eggplant, sinigang sili, native eggplant (It’s tiny but delicious), Chinese kangkong, and lettuce.”

The community is especially proud of their chicken. “It tastes like native chicken,” she says. “It isn’t gamey, and it doesn’t shrink when cooked. It’s meaty and delicious.”

The community practices natural farming methods. They don’t use chemical fertilizers or pesticides. Soil is mixed with ipa (rice husk) and cow manure for fertility. To keep pests away, they spray stems with either a nontoxic mix of vinegar with a little bit of dish soap or of crushed chili diluted in water.

Sick chickens are nursed back to health with a concoction made from the juice of crushed and strained oregano leaves. The mixture is fed via syringe to each sick chick one at a time. Oregano is also mixed in the chickens’ drinking water. Rausa gives the chickens the oregano mixture at six a.m., after they’ve eaten, and some vitamin C after their second meal, around 10 a.m. They’ve had to outsource their oregano, but plans are underway for them to plant their own.

Rausa admits that they haven’t earned much yet, mostly because they’ve had to compete with the prices of non-organically grown vegetables in a market that doesn’t yet understand the benefits of produce and livestock grown without chemicals. They’ve had to lower prices just to match prevailing market prices, but this is coupled with educating buyers on the benefits of consuming naturally grown produce. “I sometimes tell customers that these are organically grown. They’re not like the vegetables you find in the market and are worth spending for,” she says. “Our customers are happy because they can see how beautiful our eggplants are.”

The chickens are sold for P180 per kilo dressed and P160 per kilo live. They always sell out. “We have customers who come all the way here just to buy chickens,” Rausa says. She adds that the mayor is a frequent customer because at the moment, they’re the only ones in Pililia who grow chicken and vegetables this way. 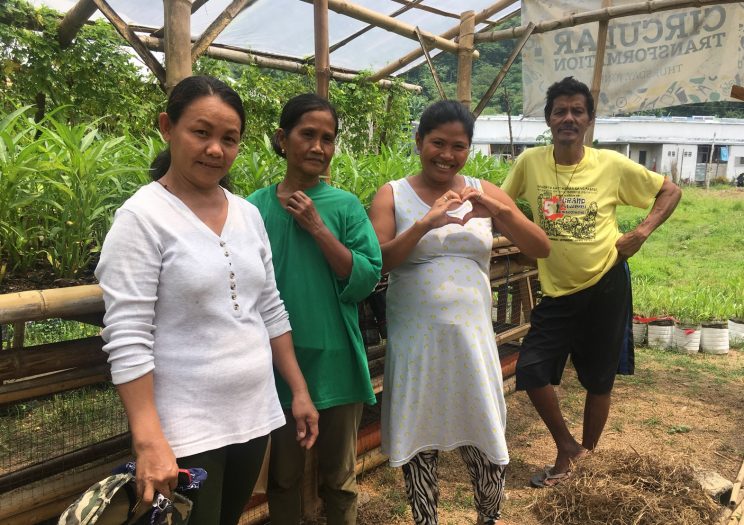 From left to right: Antia Rausa, Erlinda Rabulan, Joy Cueto (Production
Manager of the Orchidarium), and Alex Tibay pose outside the foodshed.

Things have been going well so far. “The number one effect is the good working relationship it fosters,” Hinay says. “They already have a sense of community because this is a GK village, but since they’re working for an economic activity, everyone is extra motivated. And they have a very good recording system, so they’re making money, but not that much yet.”

He emphasizes that as important as providing the community with a means of livelihood is making sure that they’re able to sustain in for the long haul without outside supervision. Though guidance is given on business management, ultimately, it relies on the community’s efforts to keep things going. “They have their own structure in managing the foodshed,” Hinay says. “That was important for us. The technology will always be there but there won’t be any progress without community participation… What we want to build is the sense of community, value, and ownership of the project. We feel that they’ve imbibed this over the past (few) months.”

He adds that the project revolves around building not just food security but also building capital leverage within the community. They also implemented a Group Savings and Loans Association (GSLA), also run by community members, to help them build equity and savings so that in the long run, they will be able to do things like apply for bank loans should they need to. “With the farmers, we build the local equity, technology, and markets,” he says.

The hope is that WWF will be able to facilitate more foodshed projects in other communities. There are currently six planned in Antipolo in cooperation with the city government. “All of them have the same modality of community involvement.”

Pililia will play a part in this, too. Hinay explains that part of the requirements will be fertilizer, and since the Pililia community has already been trained to make fertilizers and concoctions, they can make extra income supplying the other foodsheds with the inputs they need. “It as to run like a business,” Hinay says.

Like with any endeavor, there have been ups and downs. Hinay admits, for example, that finding the right leaders who will both manage the program and encourage the community to keep it up despite the challenges of running a farm. “They have to learn that they aren’t going to get a bumper harvest overnight,” Hinay says. “The science in growing the vegetables is still a work in progress, but that’s something that’s nice about farming: there are no mistakes; everything is experimental. Manage the risk so you can bounce back… For us, that’s part of the process. We don’t expect them to become experts overnight.”

Another challenge is working with the weather, especially during the current worldwide climate crisis. The community is slowly learning how to help their crops and livestock bounce back faster after calamities.

As a mentor, Hinay make sure that he’s always reachable for emergency troubleshooting, even if just through a text message. “Open lines of communication is important,” he says. “It also helps build their confidence. We’re not discounting their abilities they’re very capable, but they need a little bit of handholding throughout the process.”

Though starting the model in a community relies on help from the private sector to supply the initial funding and maybe manpower (usually as part of a company’s CSR), its aim is to make the communities self-sufficient. “We want it to be self-sustaining,” Hinay says. “Down the line, they’ll organize themselves into an association, then maybe venture into marketing agreements with institutional buyers. Our target is to make an impact on the community.”

If properly implemented, not only will the communities involved be able to feed themselves and thus become food secure, they’ll be able to make a profit, too!