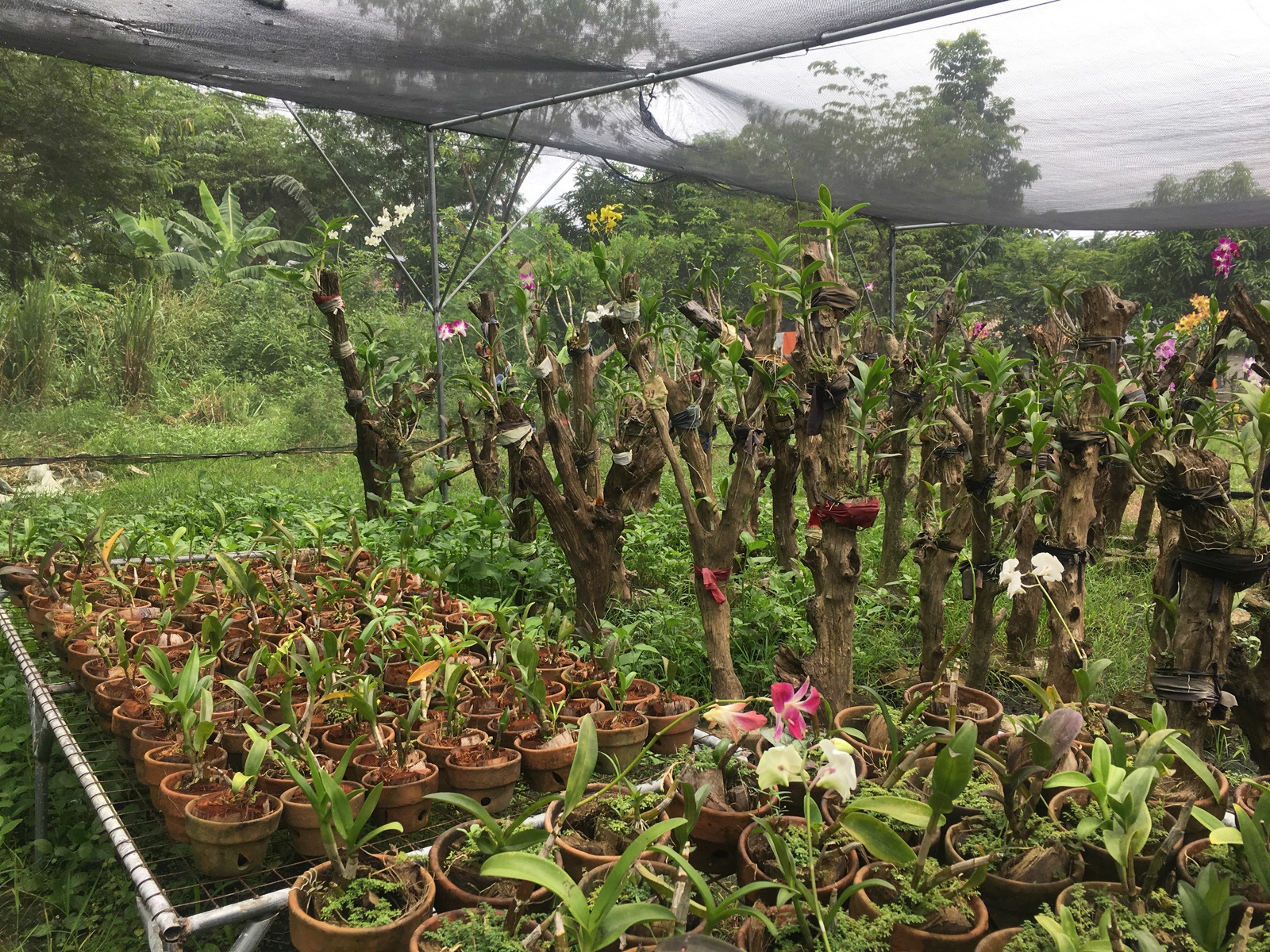 Planting crops and raising livestock and their products aren’t the only ways to make money in agriculture. For a Gawad Kalinga (GK) Federal Land community in Pililia Rizal, cultivating orchids are a good way to make a living.

The community, which is the first in Luzon to have a foodshed, also has an orchidarium to supplement its members’ income. The orchidarium-an area covered with garden netting-along with the gazebo beside it, was built bayanihan style by the community members and some French volunteers, says the orchidarium’s project manager, 34-year-old Joy Cueto, whose husband is a tricycle driver. The wood used to grow the flowers were donated by the mayor.

Cueto, who has three girls and two boys and at the time of the interview was pregnant with twins, narrates that they started with 300 orchids in pots, transplanting about 50 pots after the first two weeks, and continuously after that. “We were able to make a profit after only one month,” she says in Tagalog. 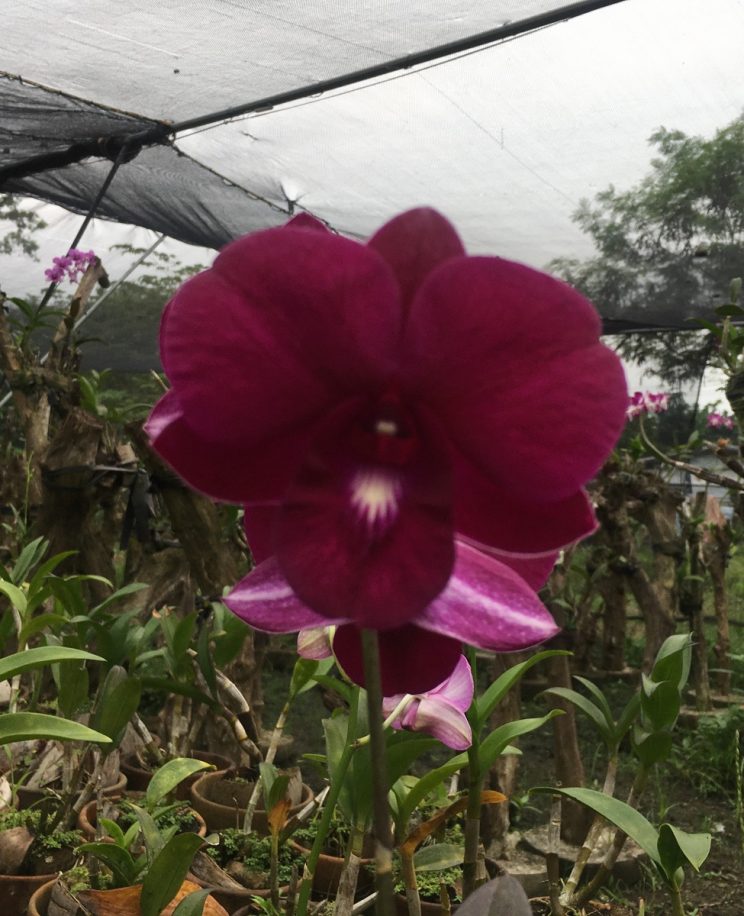 The orchids in pots are sold for P250 each, while those attached to wood are sold for P300. “At first, we wanted to sell them at the market but we couldn’t match their low prices,” Cueto says.

Since most people prefer to buy orchids attached to wood, they tend to accumulate the pots the orchids are grown in. When it’s time to buy a new batch, these pots are brought to their orchid supplier and reused to contain the new batch of orchids. They also buy new planting containers from their orchid supplier, as these cost less than if they bought them in the market.

The community is proud of the orchids they produce. They ensure that all their cuttings have roots so they can be propagated. Each plant is fed the proper vitamins to boost health and encourage seedling growth. Because of the orchids’ popularity, they were able to raise prices after only five months.

Profits vary on a day to day basis. Sometimes less than a thousand pesos, sometimes going as high as eight thousand.

The people involved with the orchidarium have different tasks. “We have people in production, two in marketing, and a secretary who is also our treasurer,” Cueto says. “There’s someone who cleans and someone who checks for ants.” 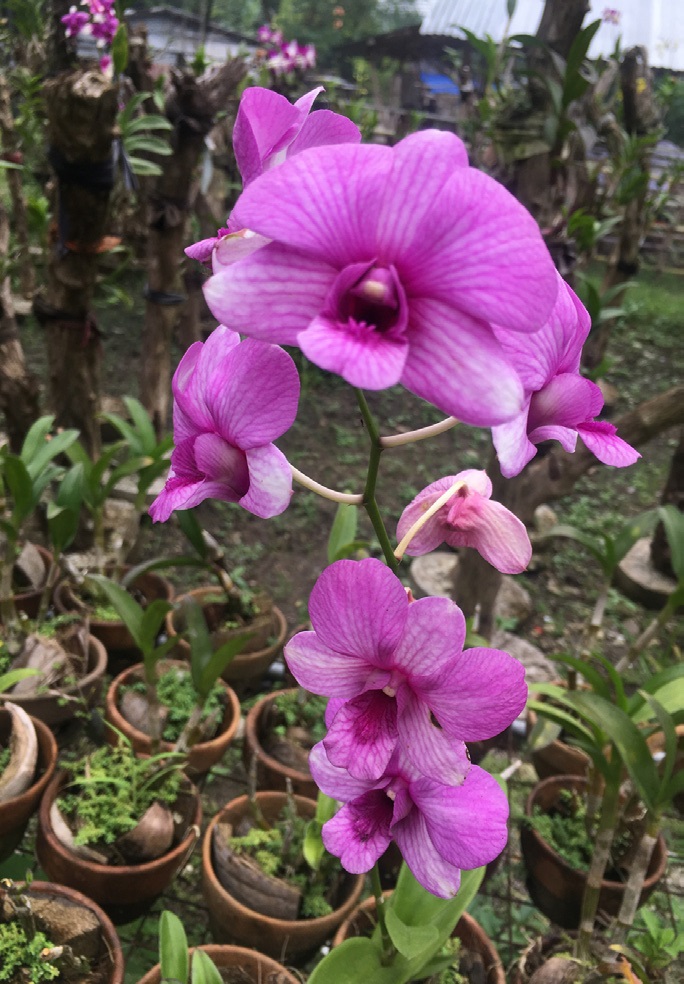 One of the dendrobium orchids for sale in the orchidarium.

They have monthly meetings where everyone asks how each one is doing in their positions, how much they have in funds, how the orchids are doing, and what their next steps in terms of expanding the business. She stresses that everyone shares in the responsibilities because everyone reaps all the benefits. There is no room for selfishness.

Marketing is done via social media. “We don’t want to be compared to the ones being sold in the market,” Cueto says. “We want to be special.”

When asked why their plants are more expensive than in the market, clients will proudly be told that they are well cared for. “The ones from the market wilt after two days,” Cueto says.

“Ours will last two months.”
Aside from social media, news about the orchids is spread by word of mouth. “We tell all our friends about our orchids and ask them to tell their friends about it, too,” Cueto says. “And when someone buys from us, we try to check up on them and help them out when needed.” She adds that communication doesn’t end after the transaction. “If you’re worried that it hasn’t bloomed yet, you can call us and we’ll help you.” It’s one of the reasons why they have repeat customers.

The holiday season has meant a lot of orders. One of the newest products introduced is orchid petals, which sell for P40 a bunch. “We earn from the petals because they will grow again,” Cueto says. “We spray them (with fertilizer) so they don’t get too hurt. They usually reflower after a week. When cut, the flowers usually last two months.”

Being paid to do something one loves

Cueto says that caring for orchids isn’t just a job; gardening helps her destress as well. She especially loves it when they get new seedlings because she thinks the tiny plants are adorable. She loves watching the plants grow, and constantly marvels at how much of a difference singing to them makes. “I didn’t know that orchids liked it when you sing to them first thing in the morning!” she exclaims.

The community now grows around 30 varieties. “It’s been a big help,” Cueto says. “We make money to supplement family expenses. You have funds to draw from in case of an emergency. We also have supplies for events-flowers for decoration from the orchidarium and vegetables and chicken from the foodshed. It’s not like before where we’d have to spend a lot. And aside from it being a big help on the pocket, our successes also encourages each family to work harder. That’s the happiest part.”

Cueto is glad that the community has more than one way to generate funds. “We have the foodshed and the orchidarium. We have no reason not to meet the needs of our children. That’s why there are no malnourished children in our village,” she says. “We have all the blessings.”