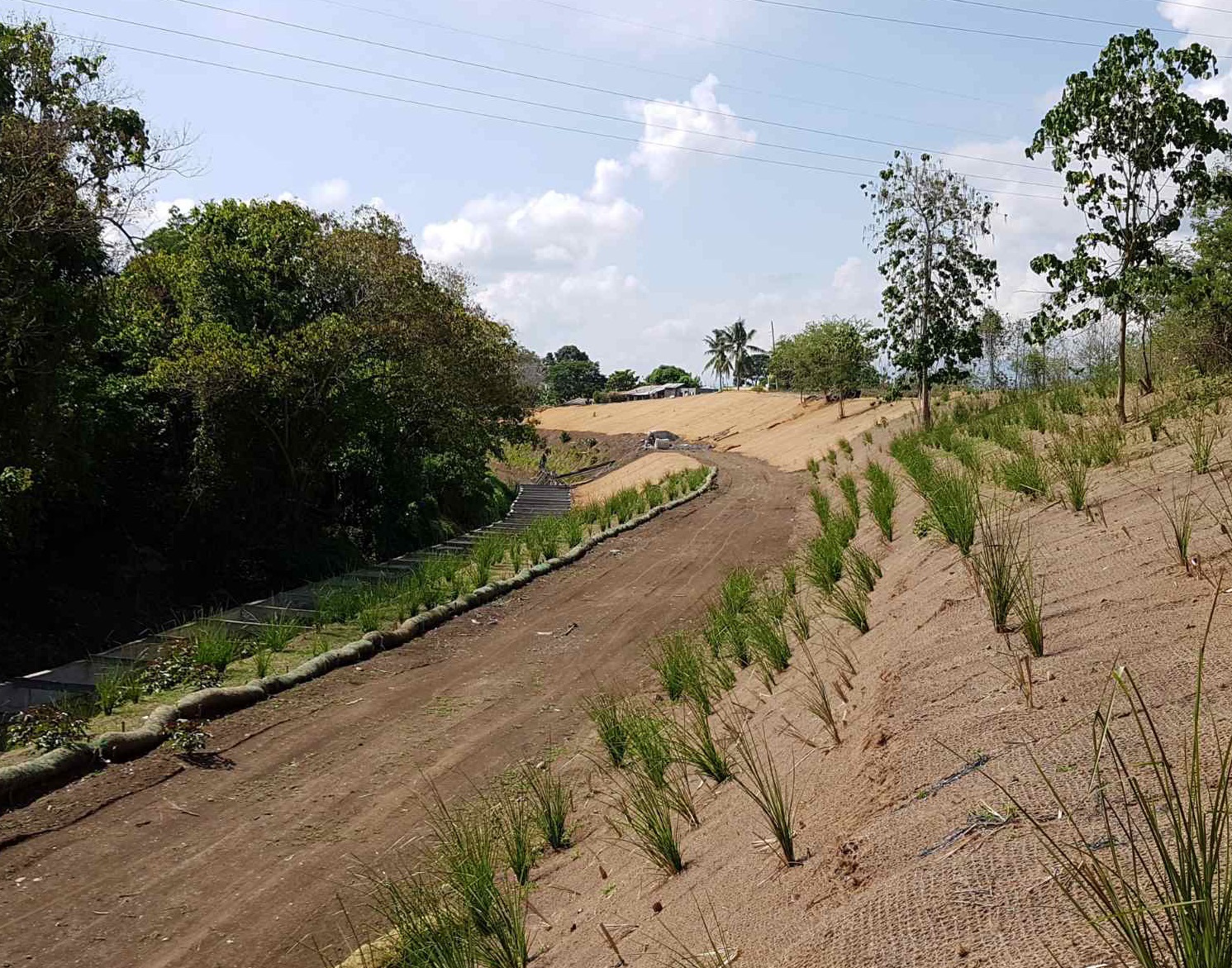 Soil is an important aspect of the ecosystem. In farming, it is a natural resource that provides crops with the nutrients necessary for their growth.

Over time, the soil’s components undergo a gradual change due to factors such as weather and human interaction. This often results in erosion, which is the weathering away of topsoil, which can lead to landslides, water pollution, and the depletion of land that can be used for farming.

Additionally, soil can also experience degradation or loss of nutrients as a result of abusive farming practices such as using harmful chemicals and overtillage or excessive digging. 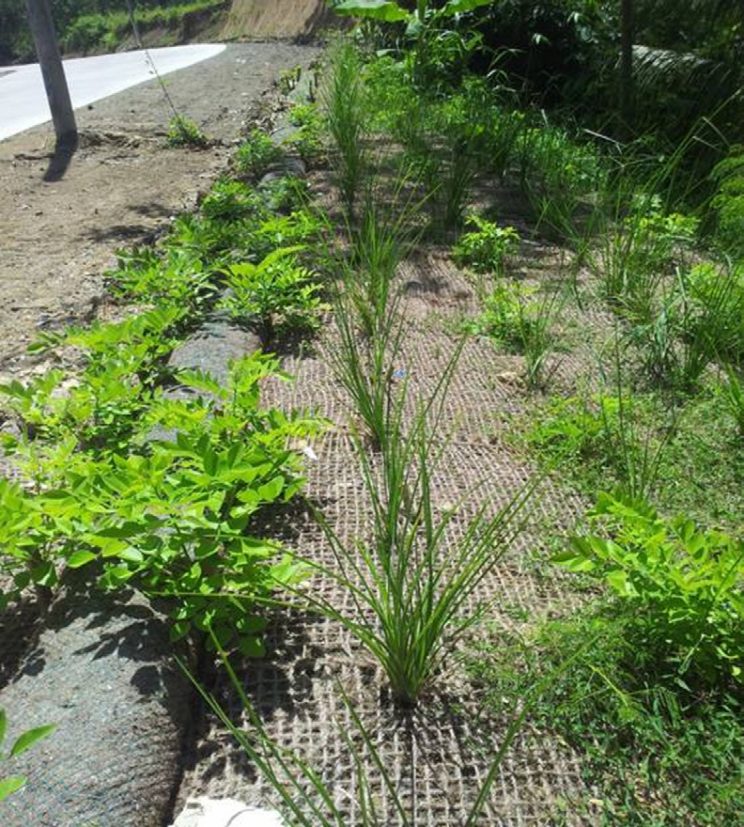 Vetiver is a grass known for its super-absorbent nature.

“Bioengineering is the integration of physical and biological sciences. We adapted it to agriculture to manage and maximize resources while solving the growing environmental problems such as soil pollution and erosion,” said Nena Mawalic, the manager of Green Asia Agri Ventures Inc.

She added that the company incorporates bioengineering to increase production while lessening inputs because our country’s consumption and livelihood depend largely on agriculture.

One procedure that Green Asia Agri Ventures Inc. utilizes involves the use of vetiver grass.

Vetiver grass (Vetiveria zizanoides) belongs to the same family as sorghum, lemongrass, and citronella. It is a densely clustered, perennial clump grass with stiff leaf bases that overlap.

“The grass has a super absorbent characteristic that regulates the volume of water to prevent runoff. It also absorbs toxic elements thus leaving the soil in good quality,” Mawalic said.

A background on vetiver

Locally known as “moras” in the Philippines, vetiver is indigenous to India. It is known to grow in low, damp sites such as swamps and bogs. Because of this, the vetiver can survive more than a month of being submerged in water.

When planted on sloping land, vetiver grass form narrow, dense hedges that delay runoff and helps water soak into the soil rather than washing off the slope.

The reason behind why the grass is so effective against erosion lies in its roots. The vetiver plant produces a massive root system that grows straight down to the soil.

It can grow up to two meters and serves as a curtain in the soil that traps sediment and slows water movement. As a result, the grass conserves both soil moisture and nutrients needed to grow crops. 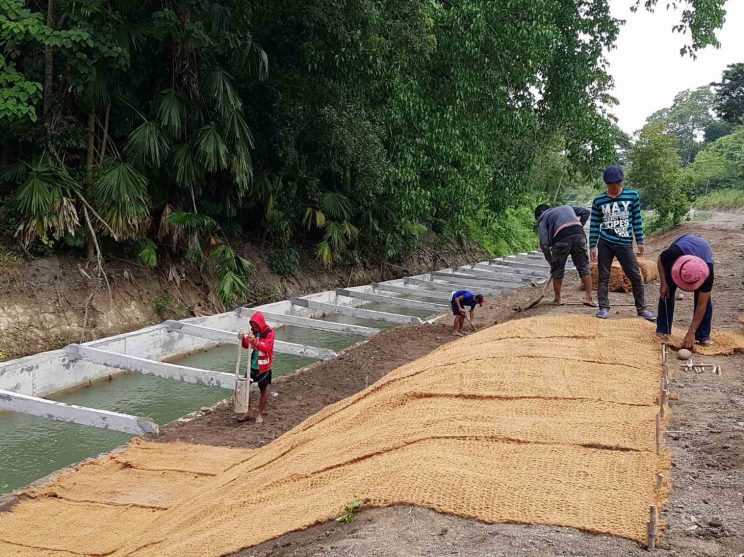 Workers installing coconets. Coconets delay water from reaching the depths of the land and prevents soil from running off.

Farmers need not worry about growing vetiver near their crops. Since it is a clumping type of grass, it is known to be non-invasive. It also doesn’t produce viable seed so there is no seeding out, as with other kinds of grass.

However, because of its root system, it’s best to plan out where to plant vetiver grass because it is strenuous to dig up.

Other than using vetiver grass, Mawalic said that the company also encourages farmers, especially those located near slopes or landslide prone areas, to use organic fertilizers to induce a greater crop yield without damaging the soil’s quality due to chemicals.

According to Mawalic, bioengineering practices such as these benefit agriculture because it enhances the nutrients in the soil needed for optimal plant growth while sustaining agricultural resources at the same time.

The company’s sustainable bioengineering approaches is not limited to controlling soil erosion and degradation; it can also be used for landscaping, revegetation, and the construction of golf courses, parks, and the like.

Creating livelihoods while caring for the environment

“As part of our sustainable advocacy, we use organic materials sourced from local communities for our products because it is practical, accessible, and environmentally-friendly,” Mawalic said.

A close up of cocolog.

The company acquires a supply of cocotwine, a type of rope made from coco coir, through their partner communities located in various rural areas of Mindanao to help these families earn at a work-from-home basis.

Coir is the natural fiber extracted from coconut husks. It is found between the hard, internal shell and the outer coat of a coconut. The material has the advantage of being lightweight so it can be used in wet areas for longer periods of time.

Green Asia Agri Ventures Inc. uses the material to create coconet and cocolog which they use in many of their projects or sell to both the local and international market.

The coconet is made by weaving coir into blankets with different densities. Mawalic said that this product helps protect slope conditions by decreasing the possibility of soil erosion by delaying water from reaching deep into the land.

In the meantime, the cocolog is a tubular structure also made from coir that also bears the same purpose as the coconet.

Mawalic said that sourcing raw materials from locals have opened livelihood opportunities for many families.

Besides aiding local families in earning an income, Green Asia Agri Ventures has already left their mark on numerous areas throughout Davao along with some in Luzon and in the Visayas.

“We worked on the farmlands of different communities so they can experience less soil erosion, slope retention, and even soil preservation,” Mawalic said. (Photos courtesy of Nena Mawalic)