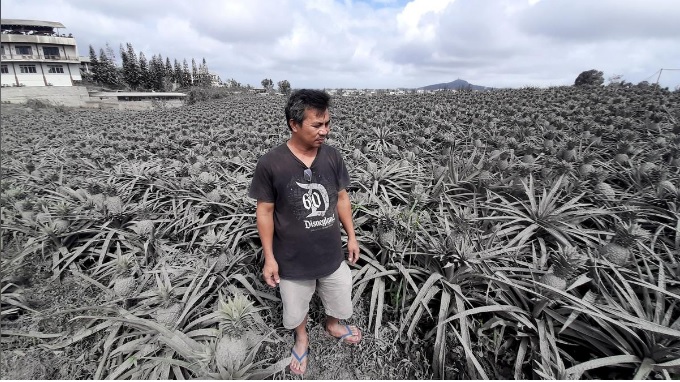 Farmer Jack Imperial, 49, poses for a portrait in his pineapple plantation covered with ash from the erupting Taal Volcano in Tagaytay, Philippines, January 15, 2020. REUTERS/Adrian Portugal.

Photo and story from Reuters

TAGAYTAY, Philippines (Reuters) – Farmer Jack Imperial woke to a picture of devastation after ash spewed from a volcano in the Philippines – his verdant green pineapple field had been transformed to a dirty dark gray.

Imperial said his chances of salvaging produce from his 1-hectare (2.5-acre) farm were small and, in any case, there was no one to sell them to with tourists avoiding the Tagaytay area on the archipelago’s biggest island Luzon, 32 km (20 miles) from the Taal volcano.

“We just have to accept that we will incur a loss,” said Imperial, 49, who had never seen such a sight in 17 years of farming. “Even if we are able to harvest some pineapples, if customers are scared to come because of the eruption, the pineapples would just end up rotting.”

The impact of the volcano on the $330 billion national economy has been a blip, despite canceled flights and a day of work lost because of a heavy ashfall in the capital Manila, 70 km (45 miles) away, on Sunday.

But for some of the farmers growing pineapples, bananas and coffee nearby it has been a disaster.

Brushing ash from a fruit, Imperial said he feared that the hot ash had harmed his crop and made it inedible. He used to sell his pineapples, in slices, chunks and juice, at a small stall frequented by tourists beside his house.

But the tourists have disappeared and tens of thousands of people have been evacuated from a danger zone around Taal.

The alert level for the volcano stood at 4 on a 5-point scale on Wednesday, indicating that an “explosive eruption” remained imminent.

The volcanic ashfall has caused an estimated 578 million pesos (more than $11 million) worth of damage to crops so far, according to agriculture authorities.

Taal has erupted more than 30 times in the past five centuries, with the deadliest eruption killing more than 1,300 people in 1911. A 1754 eruption lasted for months. The last eruption was in 1977.

The Philippines lies on the “Ring of Fire”, a belt of volcanoes circling the Pacific Ocean that is also prone to earthquakes.