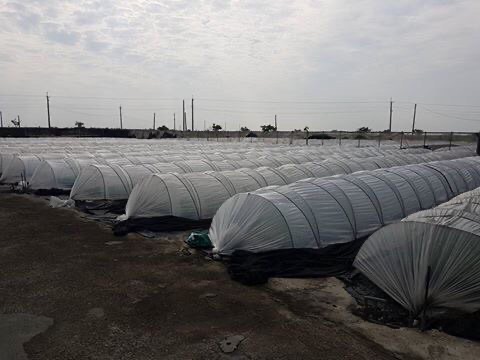 Taal Volcano’s eruption last January 12 has led to Alert Level 4 being declared in nearby areas, meaning that a major eruption (Alert Level 5) could occur in the next few days. Nearby areas have been evacuated and ashfall from the volcano has been experienced as far as Northern Luzon.

People and pets weren’t the only ones affected by this event. Nearby farms have suffered as well, with crops and livestock being compromised because of the ashfall. According to Julius Barcelona, Harbest Agribusiness Corporation’s Executive Assistant for Marketing, Operations, Finance, “A steady fall of ash on a plant can cause damage to the stems, the leaves, and the plant itself by weighing it down… So as long as it continues to fall down, the plants will eventually keel over because of it.”

He adds that volcanic ash also tends to contain a lot of sulphur, which is detrimental to plant health in large amounts, and when mixed with water (such as during rainfall) can become sulfuric acid, which can damage crops as well. Ash can also contaminate water sources and clog drainages and irrigation systems.

What to do during an ashfall

Get to safety. “Ultimately, what’s most important is to take care of yourself,” Barcelona says. “I know you want to take care of your crops but if the volcano’s exploding, you can see the imminent danger, it’s probably easier for you to try to get to a safe place first and then come back, survey the damage, and try to assess what kind of recovery you can do to your farm rather than trying to save what you can before it’s over.”

“This is just for horticultural and agronomic issues like crops, vegetable crops, fruit trees, and the like,” Barcelona says. “I don’t know if there’s any real way for you to prepare for a volcanic eruption apart from literally just covering your plants with something.”

Greenhouses help keep out the elements, not just ash (which is a rare occurrence to begin with), but also rain and sun, and in other countries, snow and other potentially harmful weather conditions as well.

Low tunneling is a more affordable, less permanent option. “[It] is basically a sheet of plastic that is stretched taut over an arch of steel or bamboo which has the exact same effect as a greenhouse in that it can protect your crops from different sudden weather changes,” Barcelona says.

In an emergency, however, whatever you have lying around to serve as cover can help. “If you have tarps or mulching, you could try to throw them over your plants and just prop them up with bamboo sticks,” Barcelona says. “Just get something to cover the plant and stop the ash from just weighing them down and breaking them apart.”

After you’ve gotten all the ash off your fields, accept that not all plants can be saved. “Herbs are usually ‘weeds,’ so they’re going to find a way to grow back. Leafy vegetables probably can’t be saved because they’ll be so heavily damaged that it’ll be impossible for you to regrow them. But they’re easy enough to grow that they shouldn’t be too much of a setback,” Barcelona says.

He adds that solanaceous crops like tomatoes, eggplants, and sweet peppers can be pruned and given biostimulants like amino acids to help them recover. Trees have a higher chance of survival. Ash should be washed off, damaged areas should be pruned, and the tree should be given nutrients to help speed recovery.

Aside from spraying plants with biostimulants like amino acids and easily absorbable nutrients, recovery can be hastened with soluble fertilizer. “[Use] mix of macro and micro nutrients so that the plant isn’t too stressed in trying to find nutrition building itself up,” Barcelona says. “You’re just giving everything to them so that they don’t have to waste their energy in trying to find nutrition in the soil.

Ash can be beneficial

Don’t dispose of all the ash you’ve accumulated. Ash, after the sulfur in it has dissolved into the atmosphere, contains minerals that can benefit plants. “You can try and incorporate them into the soil and encourage its breakdown by using microbes like EM (effective microorganisms) because letting the bacteria go to work on the ash itself, breaking down the minerals and nutrients present in it will also be good for your soil anyway,” Barcelona says.

Don’t just dump ash into your soil and hope for the best; make sure to do some research on how much ash to mix based on your soil type and the kinds of crops you grow, as well as the proper way to incorporate ash into the ground for maximum nutritional benefits.

It may take some time before it’ll be safe to return to nearby farms, and an even more time to rehabilitate the soil on those farms. But there’s a reason why farmers love to settle near volcanoes, and it’s because the soil is more nutritious there. Things may be challenging at the moment, but as numerous agricultural civilizations have proven, they’re going to get better in time.

How to make Oriental Herbal Nutrient (OHN) for natural farming