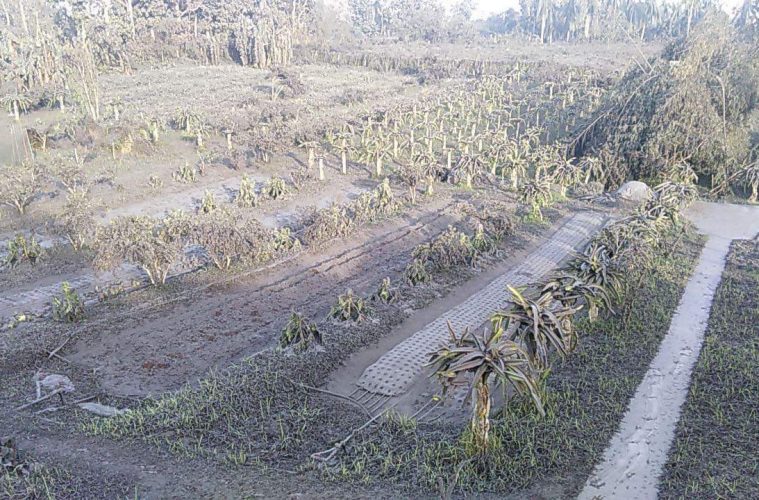 Taal Volcano’s eruption has displaced people and animals and destroyed crops and nearby flora. Its ashfall cloud reached about 55,000 feet, reaching as far as Northern Luzon. Farmers have been posting photos of ash-covered fields, their crops ruined.

Stef Mendiola, a farmer from Tagaytay, sent friends photos of her farm, and she has granted permission to print them here. The farm grows a variety of crops, from leafy vegetables to tomatoes to dragonfruit. 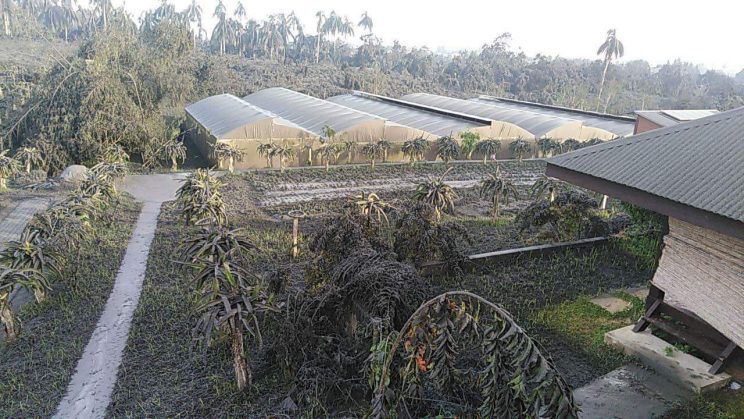 A bird’s eye view of the farm after the ashfall from Taal Volcano.

Since it’s impossible to predict the exact day a volcano will erupt, it can be difficult to secure a farm in the event of this kind of natural disaster. “Honestly, we weren’t able to secure anything. The eruption came out of nowhere and on a Sunday,” she said. 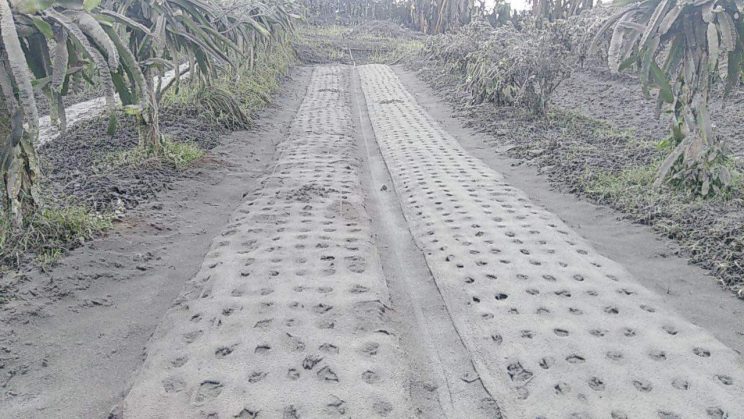 Aside from containing substances like sulfur that can be harmful to plants, volcanic ash’s adverse effects also come from the plants being weighed down.

Volcanic ash can cause considerable damage to crops and livestock. Crops have a better chance of surviving if they are covered.  “Lucky we have greenhouses, but take a look: the ash blacked out my greenhouses!” Mendiola said. 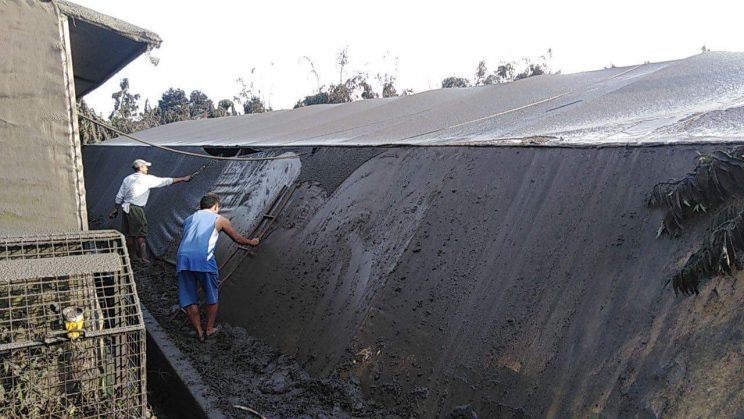 Farmhands washing off ash from a greenhouse roof.

For a lot of crops, such as leafy vegetables, it is best to clear everything and start again. “We basically have to start from scratch for our outdoor field beds,” she said. “That’s farming!” 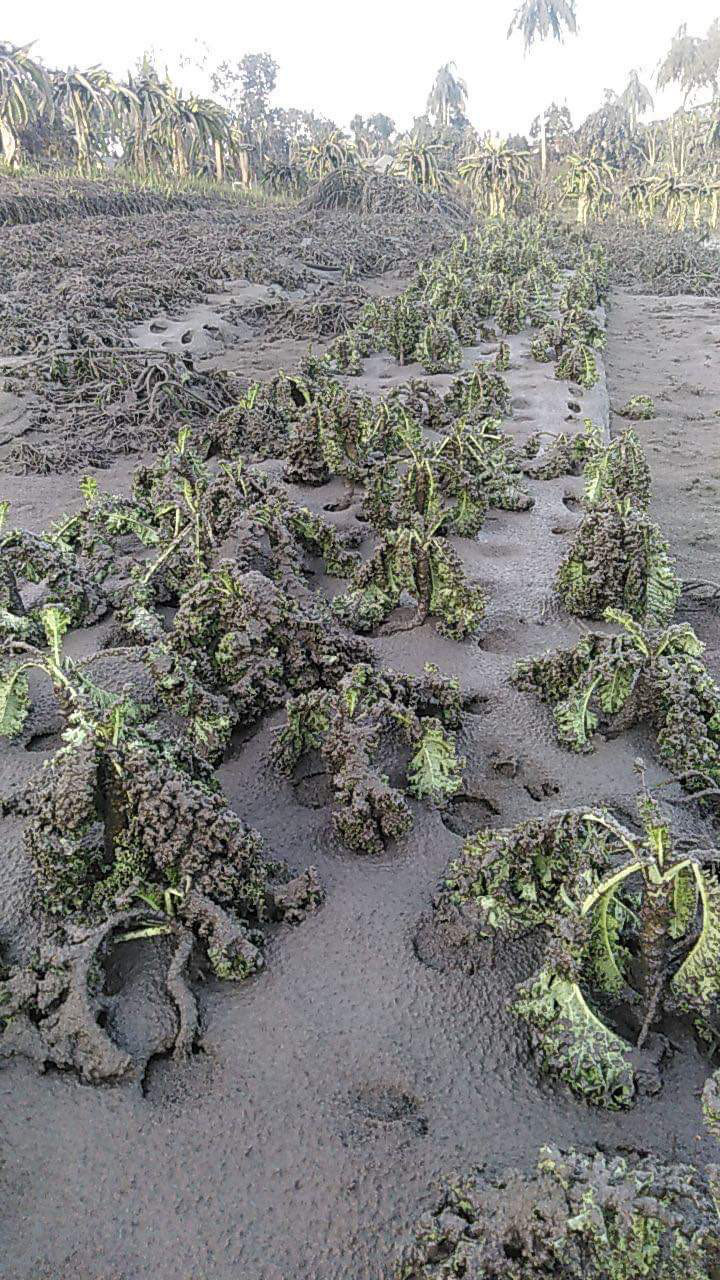 With leafy vegetables, the best way is to just start again once the area is deemed safe.

Despite the havoc Taal Volcano wreaked, she remains optimistic. “Volcano eruptions happen once every 44 years? At least for Taal. So I know how to deal with it in the future,” she joked.

A field covered in volcanic ash.

Such an event would be enough to turn many people off agriculture altogether. But Mendiola, like many farmers, know that occurrences like these are part of farm life. If anything, she hopes that the plight of the farmers near Taal will highlight how important agriculture is, and how people should not only stop wasting food, but also value farmers more.

“It’s good that people know the ups and downs of farming to make them more empathetic towards us,” she said. “But most importantly, it’s good for them to know that even despite this, we will continue to grow for them.”

The farm’s rehabilitation is ongoing, and on Jan 22, Mendiola sent photos of their progress:

The first photo is of bits of clumped ash swept into the spaces between the roofs of the greenhouses. “The amount of ash we cleared off the roofs,” she said. 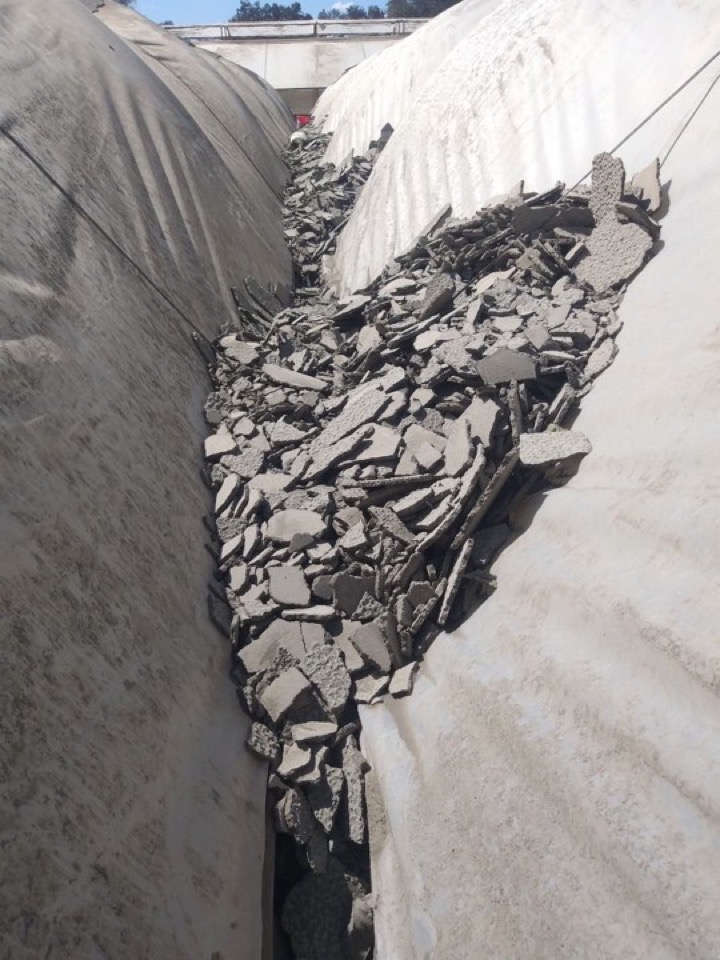 Ash collected from the roof of the greenhouses.

The other photo is quite optimistic, and was accompanied by the message: “New signs of growth on papaya trees already.” 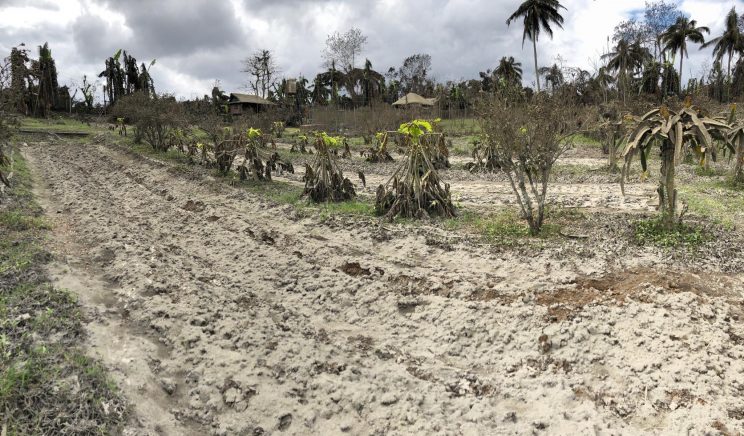 At the time of this writing, many areas around Taal Volcano remain under lockdown. This means that may farmers cannot return t their farms. But for those whose farms are not located in these areas but were nonetheless affected by the ashfall, life goes on.