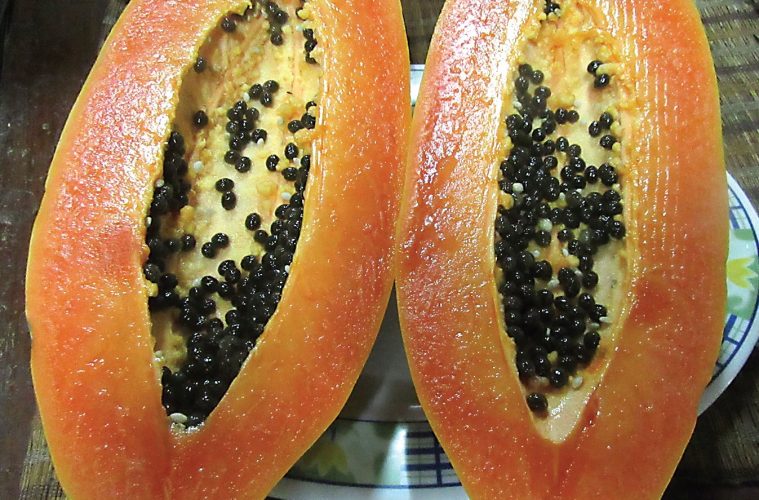 This red papaya shown here is something you will really love to eat because its thick flesh is sweet and juicy. This is not a hybrid developed by the major seed companies. It is a mutant that came out in our farm in Teresa, Rizal.

In 2015, we were invited to Lanao del Norte. During that trip we were able to bring home seeds of the Golden Papaya, courtesy of Teresita Bartolo of Tubod town. Mrs. Bartolo was so hospitable. She harvested a 2.5-kilo fruit for us to taste. According to her, the fruit was quite small. She said she used to harvest fruits that are five to seven kilos each.

The Golden Papaya is an old variety that produces fruits that are yellow, even if they are still immature. The immature fruits look as if they are already ripe. Many years back, we saw the same variety in the yard of a rare plant collector in Quezon City. 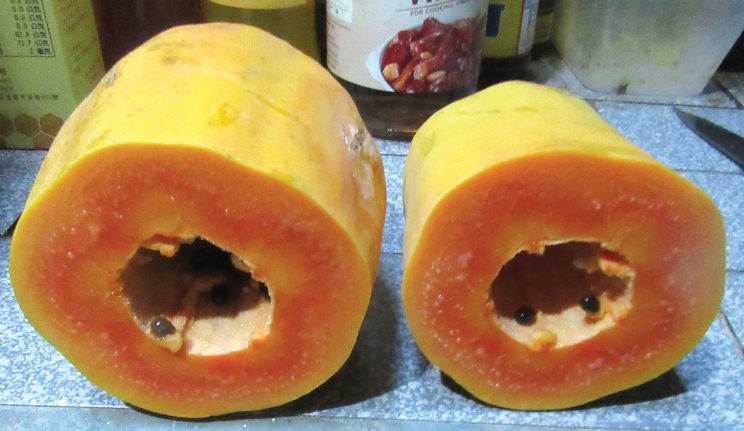 The fruit has small cavity.

We planted the seeds given by Mrs. Bartolo, hoping to multiply the golden variety because we were sure a lot of people would be interested to grow the same. We were able to germinate the seeds, some of which were light colored (yellowish), while others were very green.

We planted both the green and yellowish seedlings. Both grew quite well in the beginning. Eventually, however, the yellow ones perished and only a few green ones survived. One of the surviving green seedlings bore fruits that were more than a foot long and about five inches in diameter. The fruits had very small cavities and the red flesh was juicy and sweet.

We planted the seeds of the second generation and the couple of plants we grew produced the same fruits that were elongated, with small cavities, sweet and juicy flesh. Again, we germinated some of the seeds.

We planted just a few seedlings because there was little space available in our nursery. The fruit featured here was harvested on April 12 and eaten on April 16, 2019. It is the third generation already. We are germinating the seeds again. Hopefully, we could eventually stabilize the plant so that it will consistently produce uniform fruits that are elongated, with very good eating quality.

We are not a plant breeder, but who knows? By constantly selecting and propagating the seeds, we might eventually end up with something worth producing commercially. Abangan!