In 2010, the Philippine government legally adopted the organic farming system when the Congress passed Republic Act no. 10068 or the Organic Act of 2010. It mandates the government to promote, propagate, develop, and implement organic agriculture in the country.

Marco Schulter, Naturland’s international development manager and regional manager for Asia, shared some suggestions that could help Filipino farmers transition from the traditional farming methods to organic ones.

The first step, according to Schluter, should come from the government and its associated agencies. 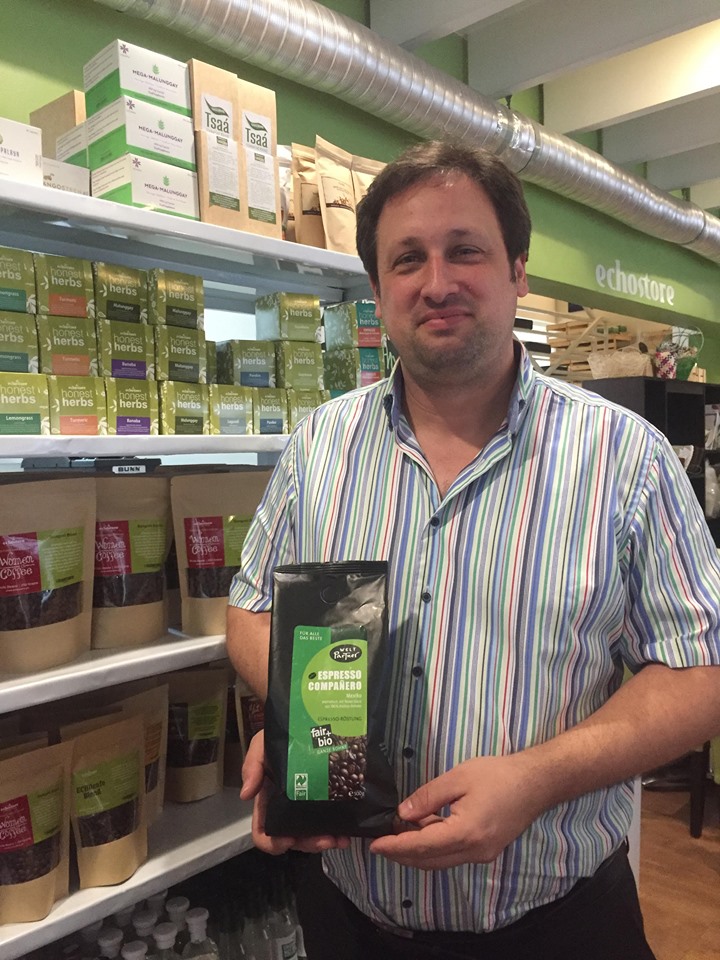 Marco Schluter posing with the a Naturland certified product inside ECHOstore, Makati.

“Farmers should be given proper monetary assistance along with the appropriate training on how they can slowly eradicate the use of spray-on pesticides and fertilizers,” he said.

He added that giving farmers proper education about organic farming practices could help them implement such approaches on their farms.

After the government offers aid to farmers who wish to transition to organic farming, Schluter said that the next step should come from the farmers themselves because determination and initiative are what farmers need to get started in organic farming.

“If you started with traditional farming methods that use chemical applications, it’s a real challenge to shift to organic farming. Yet, if the farmers are really steadfast on producing quality, chemical-free products then they would have to see it through from start to finish,” Schulter said.

Naturland is a Germany-based international farmer’s association for organic agriculture which aims to reconcile the interests of local producers with those of international operations in a globalized world.

It applies excellence standards to the organic agriculture and food sectors, in plant and animal production as well as food processing.

Currently, the association involves 65,000 farmers, beekeepers, fish farmers and fishers from 58 countries around the world.

Before a farm can receive an organic certification from Naturland, it has to undergo the following steps:

In an effort to help Filipino organic farmers become globally-competitive, Naturland recently partnered with ECHOstore, a local store that sells eco-friendly and natural products to promote a lifestyle that cares for the environment.

“This partnership was made with the local farmers in mind. Apart from giving them the opportunity to be part of a market that practices social and fair trade, we are also keen on helping farms achieve an organic certification according to Naturland’s standards,” Schluter said.

Naturland has already certified several farms in the Philippines, giving them the privilege to use the association’s logo on their products to show that they meet the standards of the EU in organic production. Some of these products can be found in ECHOstore branches in Makati and Quezon City.

Both Naturland and ECHOstore are looking forward to working with more certified organic farms in the country to promote local products to a global market.

Unifying natural and conventional farming for a stronger agriculture sector