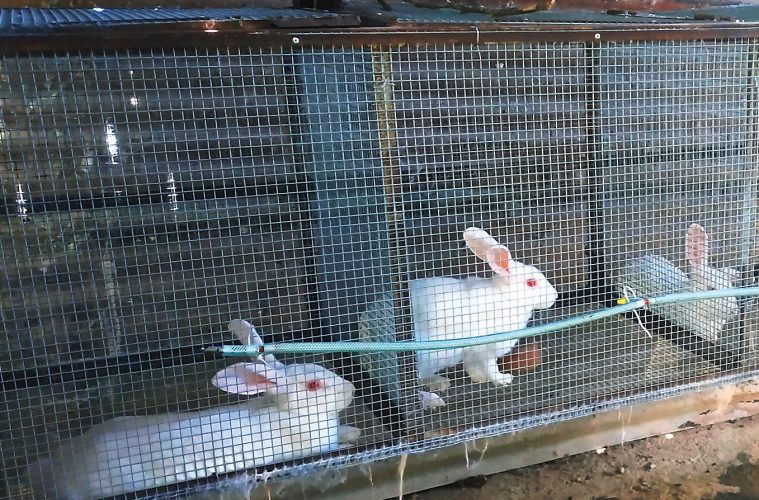 Though rabbit meat is consumed in many parts of the world, it’s still rarely eaten in the Philippines. This means there is a potentially huge market for a specialty meat that’s known for its health benefits.

Bucky Trabajales, veterinary student and owner of Buckedteeth Farms, has been raising rabbits in Silang, Cavite, where he has 30 heads (26 does, or females, and four bucks, or males), and in Novaliches, Quezon City, where he has 12. “We studied poultry, and I thought that production was still too slow, so I searched for an alternative, which is rabbit,” he says. “Though it isn’t well known in the Philippines, I searched for avenues where I could sell it for meat, and I found some.”

He started with two sets composed of two does (female rabbit) and one buck (male rabbit) each, switching the males between sets to ensure maximum gene diversity and prevent inbreeding. The six heads, plus hutches and water systems cost him around P3,000 back then, but will probably cost more now that more people are interested in rabbit farming. 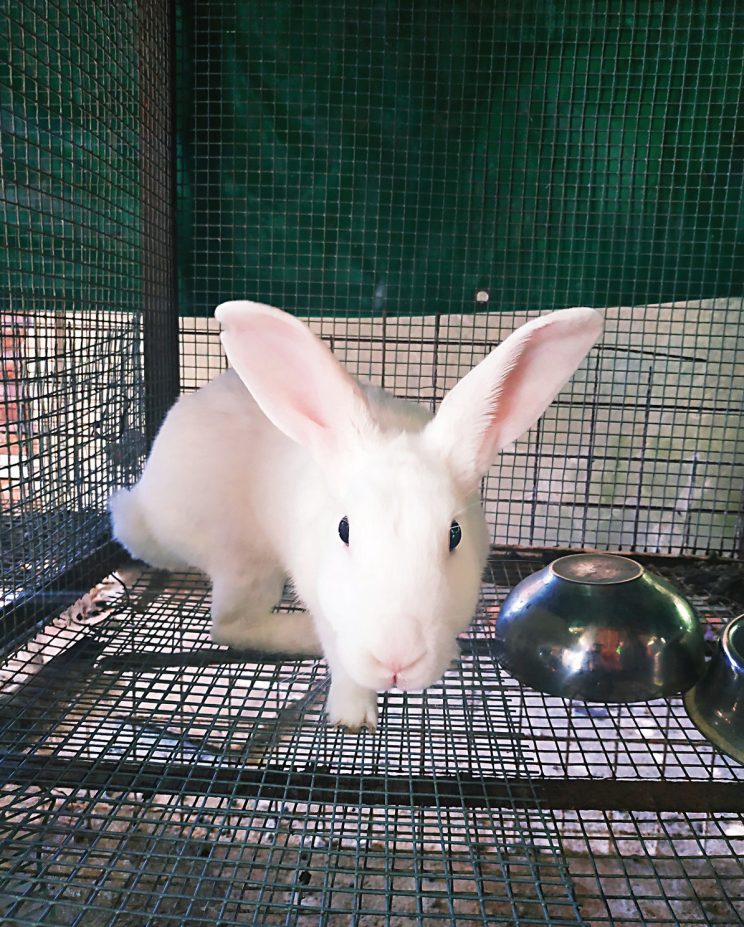 Rabbit meat is relatively unfamiliar in Philippine cuisine, but it is enjoyed by different cultures all over the world.

Rabbits have a gestation period of 30 days and can have multiple litters annually, so those initial six heads became more than 20 in about a year, not including the ones that were processed. He adds that raising rabbits is fairly easy, “easier than caring for dogs.”

For Trabajales, the biggest challenge was getting the market to accept rabbits as a meat source, which is why he decided to make tackling this his first priority.

Trabajales planned for success from the start. He did this by identifying his market before even buying his first rabbit. “You should know your market even before going into business,” he says.

Rabbit meat is low in fat and high in protein (100g of domesticated rabbit meat contains 20.1g of protein), as well as significant amounts of vitamins and minerals essential for human health. Trabajales focused on the health aspect, using this to find his target market.

He was able to zero in on his local gym, where the regulars were always on the lookout for healthy, flavorful food. It helped that Trabajales is a gym goer himself, so he knew exactly what fitness buffs were searching for in terms of nutritional content, something that could be healthier than the usual fish or chicken.

He also introduced rabbit meat to his Bible study group. He patiently answered everyone’s questions, highlighting the meat’s nutritional value and the fact that it’s part of many different cuisines around the world, such as European and Australian. He also made them try it. He cooked a dish and brought it to a session for everyone to enjoy. “It’s how I introduced rabbit meat to my family and friends,” Trabajales reveals. “If they’ve tried it, they can decide whether they like it or not.”

Maintaining a high standard of quality is important to Trabajales, especially since it’s part of what got him into rabbit farming in the first place. “The best part about breeding rabbits is that I’m sure that my stocks are clean,” he says.

A successful farmer has to make sure that they turn a reasonable profit. Trabajales stuck to the going rate of P350 per kilo. The steady interest in rabbit meat has seen this rise to P400-P450 per kilo. “I have bodybuilder clients who buy from me regularly,” he says, adding that he sells about 25kg a month on average.

More money can be made when one product can be turned into many. Raising rabbits doesn’t end with meat. Trabajales also supplies rabbit fur to a friend who tans leather. Untreated rabbit fur can go for P30-40 per piece depending on color and quality. Tanned, they can fetch up to P200-300. Rabbit feet are also in demand as lucky charms, and can go for P50 per piece, untreated. When turned into keychains, they can sell for P200-300. Rabbit tails can be turned into keychain charms as well.

Trabajales processes the rabbits himself because not a lot of people want to look a cute bunny in the eye while turning it into meat. However, he stresses that even in the Animal Welfare Act, rabbit comes before goat in the list of animals that can be raised for food.

He finds it amusing that goat meat is widely accepted as food, but not rabbit. “There’s history behind it,” he says. “The Americans would keep rabbits for meat on their base in Pampanga and they’d have Filipinos take care of them, so rabbits became associated with being cared for and not eaten.”

Some of his customers are friends whose parents have certain illnesses but do not want to give up eating meat. With their doctors’ approval, many older people have found that while they cannot eat pork or chicken for health reasons, they can safely consume rabbit in moderate amounts.

Farming can be lonely, especially when you’re young, and also if you’re producing a niche product. Fellow farmers and organizations that support your cause can go a long way in helping you physically and mentally. Trabajales is a member of PLCI-ProMeat, a division of the Philippine Lapine Club (PLCI) that focuses on rabbit farming. PLCI is an organization for rabbit and guinea pig enthusiasts. “There’s a lack of knowledge about rabbit farming and the nutritional value of rabbit meat and (PLCI-ProMeat) is doing its best to bridge that.”

Though Trabajales has found a steady customer base, he doesn’t take this to mean that he can relax. He knows that the rabbit industry is young, which means that there are still a lot of opportunities for the entrepreneurial farmer. For example, many foreign countries are looking to import rabbit meat on a continuous basis. At a recent expo, Trabajales was approached by a Japanese man who needed to export 1000 heads weekly. “We visited BAI (Bureau of Animal Industry) and found that many countries have been asking about rabbit farming in the Philippines,” he says. “Even major producers like Malaysia and Sri Lanka can’t keep up with the (current) demand.”

Local restaurants can be customers as well. Rabbits are part of Chinese, Korean, and French cuisine. Their ears can be cooked as sisig and their heads and bones can be made into soup stock.

Rabbit growers also supply schools and laboratories who may need rabbits on a regular basis.

“There’s a lot of potential in the Philippine rabbit industry,” Trabajales says.

All we have to do is seize it.