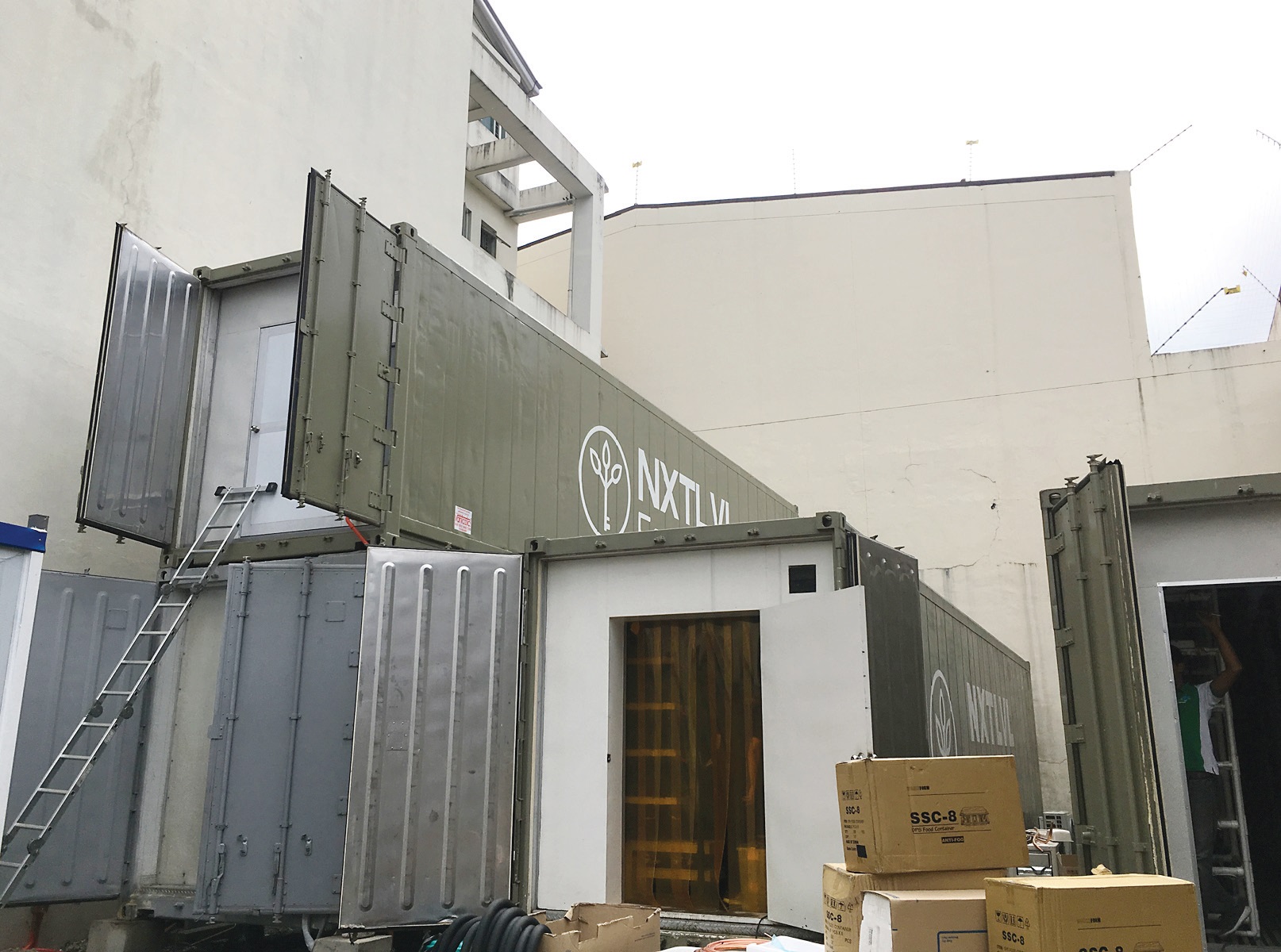 Behind a nondescript gate in the middle of bustling New Manila is a lot that contains a bunch of container vans, some stacked on top of each other. One of these vans houses a hydroponic farm setup where arugula, basil, and kale grow at a constant 18°C every day of the year while the rest wait to be converted to similar indoor farms.

This is NXTLVL Farms, a hydroponic farm that aims to grow vegetables in the city. “We grow in the city so that we can decrease our food miles,” says NXTLVL’s Head of Operations and Growth Robin Kwee, 29. “We want to make sure that the quality, the consistency of the vegetables is always at its highest.”

“We also minimize the logistics of farming,” adds Sandro Cruz, 22, who is part of NXTLVL’s Engineering Team. “The produce that we have is more nutritious because it isn’t cut. Because [when] you cut the roots, it starts losing nutrition value over time. But since we cut [our produce’s roots] on the same day we deliver, we don’t have that much of an issue.” 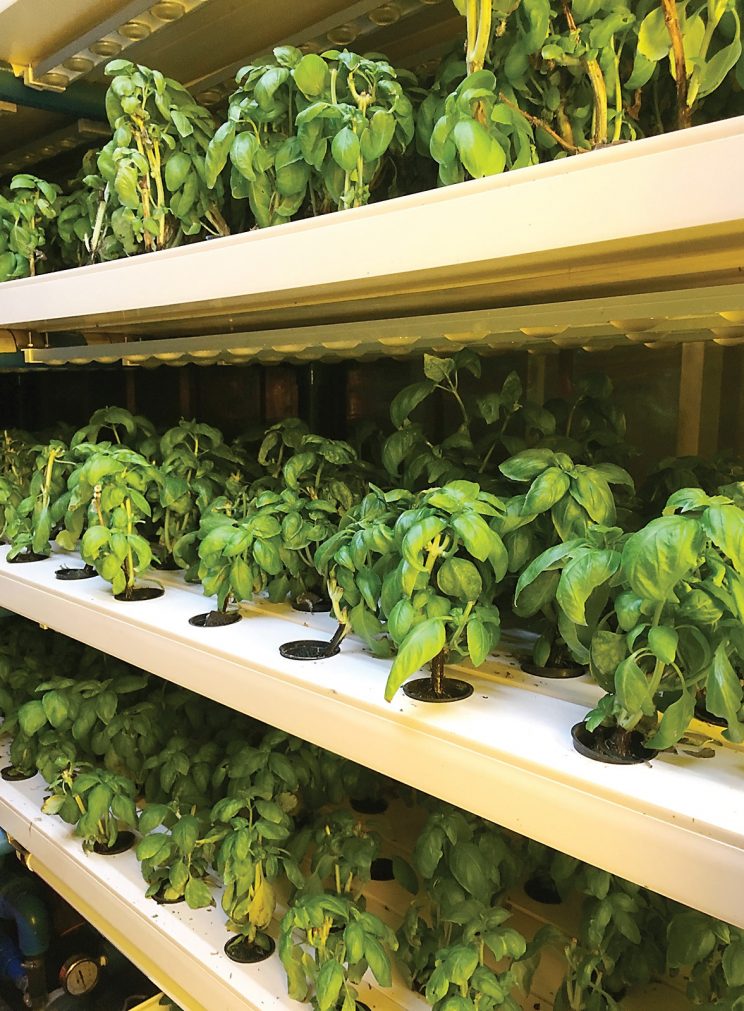 A farm is a farm, even if it’s located in the city. Plants still have to be tended to every day.

The other members of NXTLVL’s core group are Head of Marketing Aaron Qui, 34, and Earl Lim, 33, who is President.

Not all of the partners expected to become urban farmers. Kwee was a software developer who worked in retail. “The reason I got into farming is I felt like I wanted to give back to the community. I went to Thailand and a few countries in Southeast Asia and saw how good the quality of vegetables are and when I came back here to the Philippines, because of logistics problems and because of our weather, we can’t always have good quality. That’s why I wanted to start growing better quality vegetables,” he says.

Cruz, who is still in college, used to grow vegetables in his home garden with the help of his grandmother. “I made my own hydroponic system when I was 18. It worked out well, and then I wanted to pursue it as a business,” he says. “When I graduate, I’ll still be full time at NXTLVL.”

There is an increasing interest in urban farming, especially as consumers demand a closer route from the farm to their forks. The challenges of setting up a farm in an urban environment is also what makes it attractive to people who work in tech.

NFT is a hydroponic system where the plants are placed in channels where their roots are allowed to touch very shallow moving water that is recirculated around the system. The water contains all the required nutrients to keep the plants healthy and growing. A drip irrigation system uses drip emitters to drip the required amount of water and nutrients onto the grow media, instead of being sprayed over or being run under the roots. “We use an NFT system and we use four pumps total in one box. Per pump, it handles a quarter of that box,” Cruz says.

“It is easy to set up a hydroponic system, but it’s difficult to perfect it,” Kwee adds. “The key to our growth is that we have the exact settings that we want so we can grow as best as possible.” The farm currently grows kale, arugula, and basil, and there are plans to grow other crops such as mushrooms and strawberries, all indoors.

They use a full spectrum of LED lights. NXTLVL worked very closely with the manufacturer to develop the lights, which aren’t available in the market.

Their vegetables are grown in several kinds of media: rock wool, grow plugs, and foam, though the farmers prefer rock wool. Growing time depends on the kind of vegetable. Arugula and kale take three weeks, while basil takes about two months. “We harvest around twice a week. Each box does around 20-30 kilos per week, per vegetable,” Kwee says.

‘We don’t use any pesticides. Our box is fully climatically controlled so as much as possible, insects don’t come in and… we can control everything that we put in ranging from the water, the nutrients, the lights, the light hours, the temperature, CO2, humidity,” Cruz adds.

The farmers are continuously perfecting their system. This involves a lot of trial and error, mostly online research, and consultations and comparisons with other farmers, both urban and traditional.

One challenge is perfecting cycles to gain a consistent yield. “Like in a factory, we wanted to get it to (the point that) every week, we harvest this much. But plants are living things, so what we expect to happen doesn’t always happen.”

Another challenge is dealing with factors like pests without using chemicals. When they do appear, they are picked off by hand.

And then there is electricity. With the Philippines charging one of the most expensive rates in the region, how feasible is it to run a farm that relies on electricity 24/7? “Yes, electricity is expensive. Electricity is actually one of our main costs in terms of operations expense,” Cruz says. “However, our main advantage is that we are closer to the city, so since we’re closer, we can harvest on the same day as we deliver. It’s more fresh, the quality is better. Since the quality is higher, we can command a higher price. That’s how we balance our high cost-by commanding a higher price because we have better quality.”

On the bright side, farming in container vans means that they are easily transplantable. The farm moved from its original location in Bicutan to its current location in New Manila in just one day. All they had to do was pick up the container vans, which they call FarmBoxes or just ‘boxes,’ with a crane, load them onto a truck, transport them, and move them into their new location. 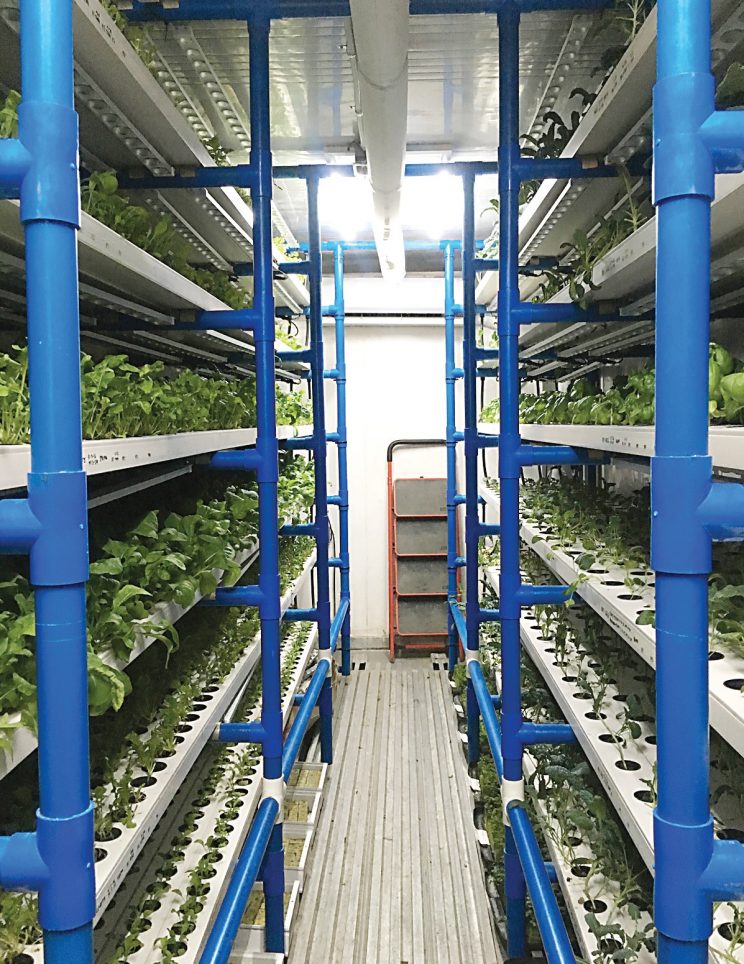 Indoor farming continues to gain traction as more people move to the cities and as issues of food security continue to arise.

They differentiate themselves from the competition by offering high quality, ready-to-use produce. For example, their vegetables come with the roots and main stems (when applicable) removed, so that the customer gets only the product they’ll be using. Plus, their vegetables taste good. An Italian chef once told the farmers that their arugula reminds him of the arugula back in his native Italy.

NXTLVL does not want to take away anything from traditional farmers. They are, however, looking to fill an agricultural niche, and inspire others to the same. “Our goal is not to take away from farmers, but to be like, ‘Oh, these guys are doing this, maybe we can do something different as well, and maybe start an agricultural revolution, hopefully,” Cruz says.

“The thing here in the Philippines, I think, is that markets are really segregated. We have good farmers but it’s hard for the main market to get access to good quality vegetables. One advantage for us is that we know where the market is, who wants to buy the product. We target the high end supermarkets, the high end restaurants who want to pay a premium for the better quality,” Kwee adds.

A big factor in their securing steady high end clientele is knowing the right way to present their product to the right people. “One advantage for NXTLVL Farms is that we have good investors and good founders that know how to talk to people that have money and are willing to invest in agriculture and in this type of product,” Kwee says.

The farm recently got $750,000 in funding from venture capitalist firm KSR Ventures. So far, the farm has received $1,000,000 in total funding since it started operations two years ago.

An urban farm is still a farm

Even if it’s situated in the city, NXTLVL is still a farm, and so its founders and the two farmhands have farm tasks and keep farm schedules. “At the end of the day, it’s still a farm, so we do mostly the same stuff a normal farmer would do. We seed, we harvest, we clean… and I think a big part of farming for most farmers is [the] proper planning of how to cycle your crops, how to handle things that you didn’t plan for. If there’s a disease that comes in, what do you do and how do you handle that. I think that’s mainly it,” Kwee says. 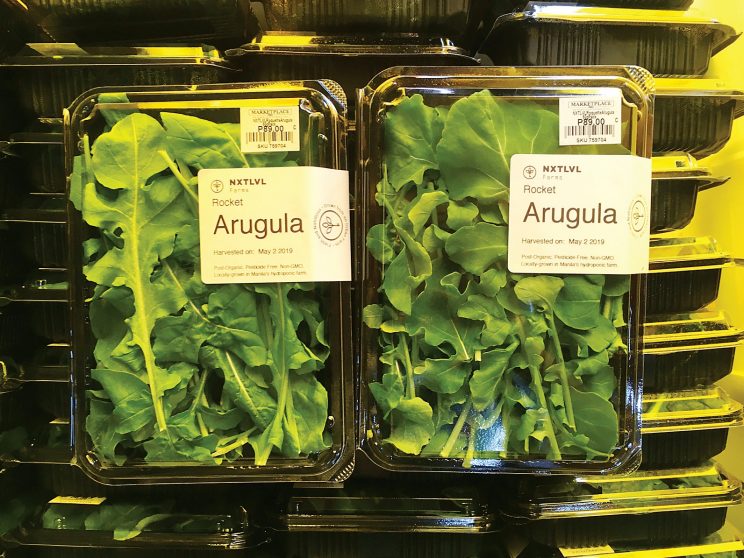 Products are sold with roots and large stems already removed.

NXTLVL is currently working on new designs for their boxes, as well as improving their hydroponics system and looking into the possibility of growing more types of crops such as mushrooms, strawberries, and tomatoes. As they expand their farm, they plan to grow one crop per box. There are also plans to set up FarmBoxes in other parts of the country.

As more people move into cities and as concerns for food security grow, urban farming is being hailed as the next wave of agriculture. While the guys at NXTLVL are optimistic about this, they are also pragmatic. “We’re not the perfect solution for farming, but I think we could get there. I don’t think there is a perfect solution to anything,” Cruz says.

Kwee adds: “I think the Philippines has a long way to go in terms of our farming practices. There’s so much opportunity for us to grow and if we can find more people to get interested in farming, I think we can all get there eventually.”