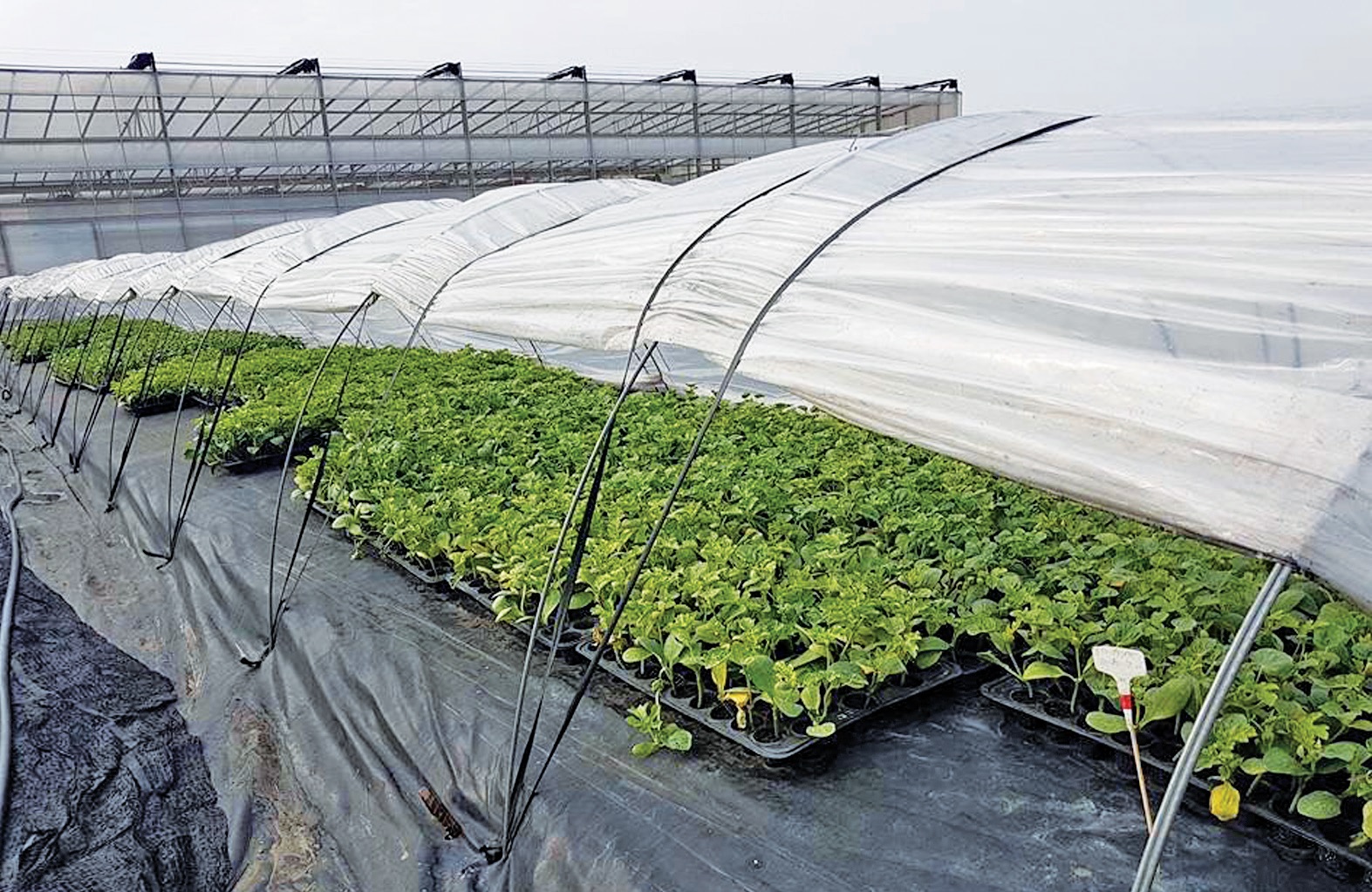 Taal Volcano’s eruption has displaced people and animals and destroyed crops and nearby flora. Its ashfall cloud reached about 55,000 feet, reaching as far as Northern Luzon.

Volcanic ash can have harmful effects on plants. First of all, too much of it can weigh the plant down. “A steady fall of ash on a plant can cause damage to the stems, the leaves, and the plant itself by weighing it down,” says Julius Barcelona, Executive Assistant for Marketing, Operations, and Finance for Harbest Agribusiness Corporation. “It can snap branches, leaves, [and] damage the stems of the plant by sheer weight. So as long as it continues to fall down, the plants will eventually keel over because of it.”

Volcanic ash can contain a lot of sulphur, which, to varying degrees, can be harmful to humans, animals, plants, and machinery. “When sulphur in the air interacts with water, it becomes sulfuric acid, and that can also cause a lot of damage to your plants as well,” Barcelona adds. 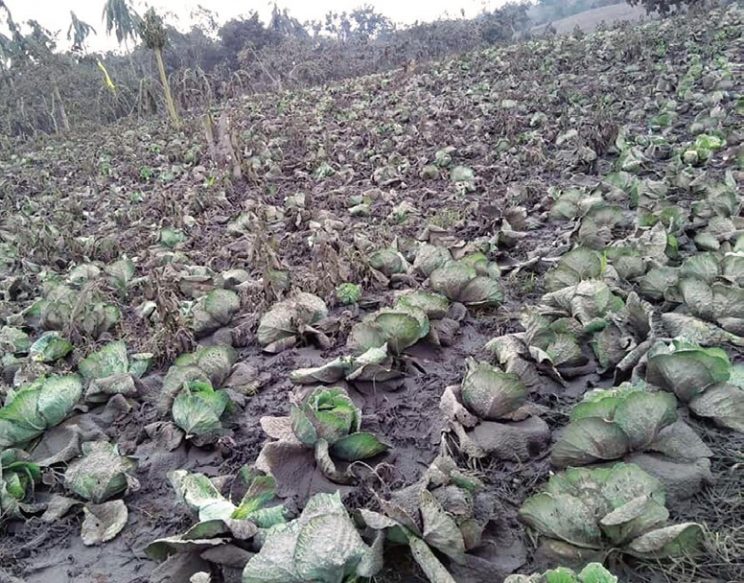 Volcanic ash can contain a lot of sulphur, which can be harmful to humans, animals, plants, and machinery.

Sulfuric acid is very corrosive, and it can cause acid damage to crops and equipment. It can also contaminate groundwater and water tanks. Wet ash also tends to clump together and can clog irrigation systems, canals, and some water sources like tanks and pipes. “It’s quite messy, especially since there’s no real way for you to tell whether or not when an eruption is going to end, so the ashfall is just going to continue coming until the eruption ends and the volcano has stabilized,” Barcelona says.

Since there is no way to tell when a volcano is going to erupt, what kind of eruption it will be (Taal’s is phreatic, which means an eruption caused by superheated groundwater, as opposed to magmatic, which is caused by magma, or molten rock; and phreatomagmatic, which is when super hot steam hits magma), or when ashfall or eruption will end, the first thing a farmer should do is get themselves and their families to safety. “ I know you want to take care of your crops but if the volcano’s exploding [and] you can see the imminent danger, it’s probably easier for you to try to get to a safe place first and them come back, survey the damage, and try to assess what kind of recovery you can do to your farm rather than trying to save what you can before it’s over,” Barcelona says.

Coverage is key (after farm safety is secured, of course)

If a farmer has a bit of time to prepare, the most they can do to save as many plants as possible from ashfall is to keep them covered. “I know in some countries, they try to cover their plants, not just in event of a volcanic eruption or in the event of ashfall, but also in the event of typhoons or sudden snow or anything of the sort,” Barcelona says. 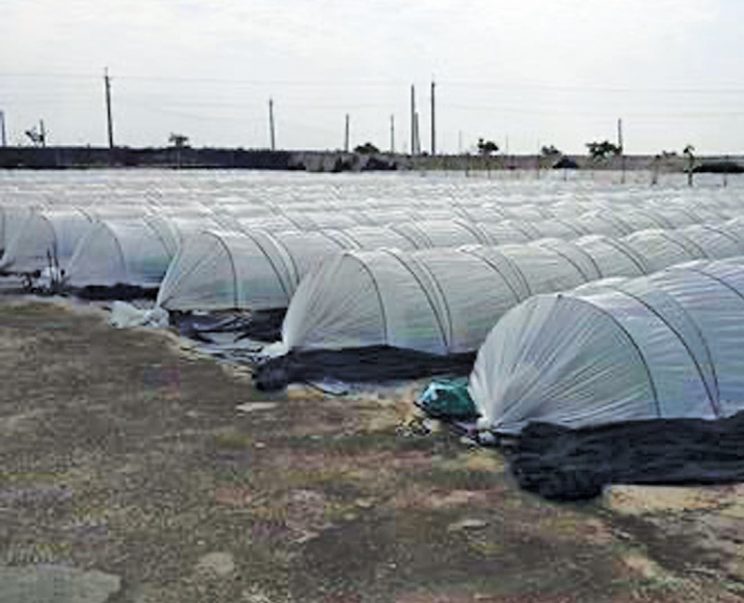 Low tunneling can be a reasonably-priced way to keep plants safe from the elements.

The more covered plants are, the safer they will be in the event of ashfall (though not necessarily from larger debris). Greenhouses do this very well. “Greenhouses are obviously the best way for you to make sure your plants are protected, not just from ashfall but from any sort of weather condition because at the very least, it will collect the ash on the roof itself and it’s easier for you to clean the roof a greenhouse than it is for you to try and save your plants from a gigantic layer of ashes dumped on top of them,” Barcelona says.

Another option that’s more affordable, albeit less permanent, is low (or row) tunneling. “[It’s] basically a sheet of plastic that is stretched taut over an arch of steel or bamboo which has the exact same effect as a greenhouse in that it can protect your crops from different sudden weather changes,” Barcelona says.

Of course, if one doesn’t have either a greenhouse or low tunneling, good old tarpaulins, or even mulch, will do. “You could try to throw them over your plants and just prop them up with bamboo sticks, just get something to cover the plant and stop the ash from just weighing them down and breaking them apart,” Barcelona says. “ This is just really for horticultural and agronomic issues like crops, vegetable crops, fruit trees, and the like.”

Once it’s safe to return to the farm, the next step is to remove as much ash as possible. Be sure to wear protective clothing while doing this. “Try to spray with water the ash that has accumulated on the plant itself but take care that it doesn’t end up in your water system because the ash can damage your water and can clog everything up,” Barcelona says.

Crops like leafy vegetables will be unsalvageable, and it’s best to clean the area and start again. “Leafy vegetables probably can’t be saved because they’ll be so heavily damaged anyway that it’ll be impossible for you to regrow them. But they’re cheap and they’re easy enough to gr ow that they shouldn’t be too much of a setback,” Barcelona says. The same goes for gourds and other crops with a limited harvest season. “Harvest what you can. If it was before the plant was about to fruit, but again, if your flowers have been damaged, that’s going to be very difficult for you to recover.”

Herbs, which tend to be hardier, can be trimmed of damaged parts and boosted with bionutrients to spur regrowth. The same with solanaceous crops like tomatoes, eggplants, and sweet peppers. “You could try pruning them back and then giving them a boost of biostimulants like amino acids or strong doses of easily absorbable nutrients to try and get it to recover as quickly as possible and hope that you’ll promote enough lateral shoots to help your plants recover,” Barcelona says.

Trees will probably be okay. “Just try and wash them off. Trim off the worst of the damage. And similar to other fruiting plants, get a bunch of nutrition and biostimulation into the tree itself so that you can help it speed up its recovery process,” Barcelona says.

One way to do this is to “try and superboost their recovery or jumpstart their recovery by giving them a heavy dose of biostimulants like amino acids,” Barcelona says. “You can also look at jumpstarting their recovery by providing soluble fertilizer, so a mix of macro and micro nutrients so that the plant isn’t too stressed in trying to find nutrition building itself up. You’re just giving everything to them so that they don’t have to waste their energy in trying to find nutrition in the soil.”

Watch what you feed grazing livestock

Livestock should ideally be evacuated. 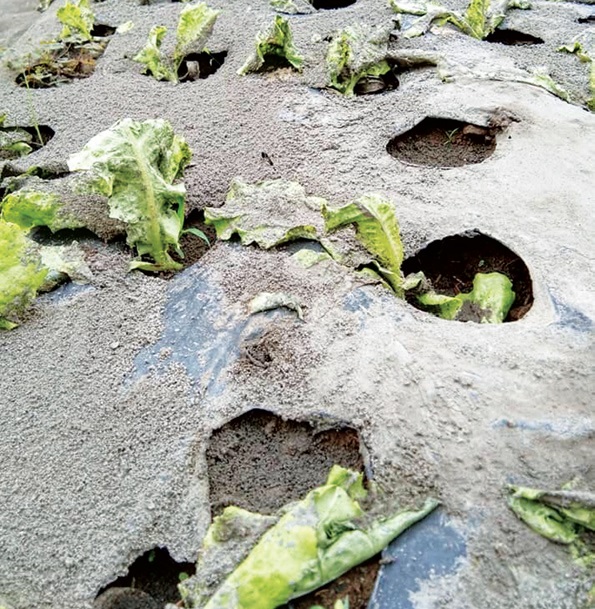 Crops like leafy vegetables will be unsalvageable, and it’s best to clean the area and start again.

According to the United States Geological Survey (USGS)’s Volcanic Ash Impact Working Group, consuming ash-covered grass or contaminated feed or water may cause gastrointestinal blockages that are harmful, even fatal, to livestock.

Volcanic ash can be good for agricultural land

In the long run (we’re talking a few years to a few decades), volcanic ash can actually enrich the soil. “Over time, the ash will break down and it is fairly nutritious. You can actually incorporate that into your soil until such time that the sulfur and other toxic materials inside of it metabolizes in the atmosphere into more harmless forms,” Barcelona says. “I guess the best way for you to incorporate ash into your soil is to dig it into your soil and not leave it on top of the soil area itself… and encourage its breakdown by using microbes like EM (effective microorganisms).”… because microbes are what help break down particles and they’ll break down the available nutrients in the ash itself, help speed up the process of it incorporating into the soil.”

Don’t just dump ash into your soil and hope for the best; make sure to do some research on how much ash to mix based on your soil type and the kinds of crops you grow, as well as the proper way to incorporate ash into the ground for maximum nutritional benefits.

Again, Barcelona stresses that ash can be dangerous and precautions need to be taken when handling it in any capacity. “If the ash is not treated, it can wash away into your water system and clog up your drainage, or if your soil is high in fluoride it can form toxic compounds to livestock,” he says. “I repeat: Ash by itself is not safe to use. Please allow decomposition in the soil.”

With Phivolcs predicting a major eruption in the near future, it’s highly risky and unadvisable for farmers to return to fields located on or near areas on alert. The steps here should only be undertaken once governing bodies have determined that it is absolutely safe to return to farmlands. As Barcelona says, “Ultimately, what’s most important is to take care of yourself.” (Photos courtesy of Julius Barcelona and Raphael Teraoka Dacones)

Lush among the luxe: Empty lots inside one of Metro’s luxurious villages turned into urban farms