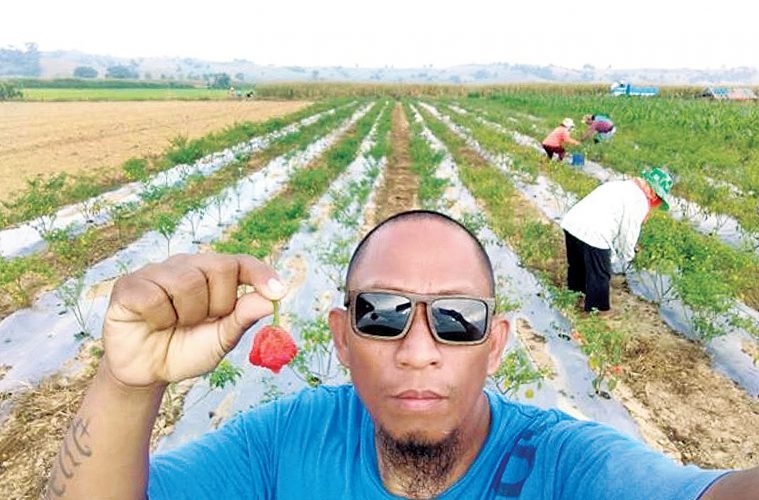 An Isabela farmer heats things up with superhot chilies

In romance, things go a little better when there’s a little heat in the mix. The same goes for several Filipino dishes such as Bicol express, sisig, and laing, all of which uses chili peppers to add a little zing in every bite.

Similar to the wide array of dishes that incorporate chilies, there is also a vast selection of chili peppers that can be consumed.

One such variety are “superhot” chilies, which are what Manuel “Manny” Cabrera, a farmer from Centro-San Antonio, Ilagan City, Isabela, grows on his farm. 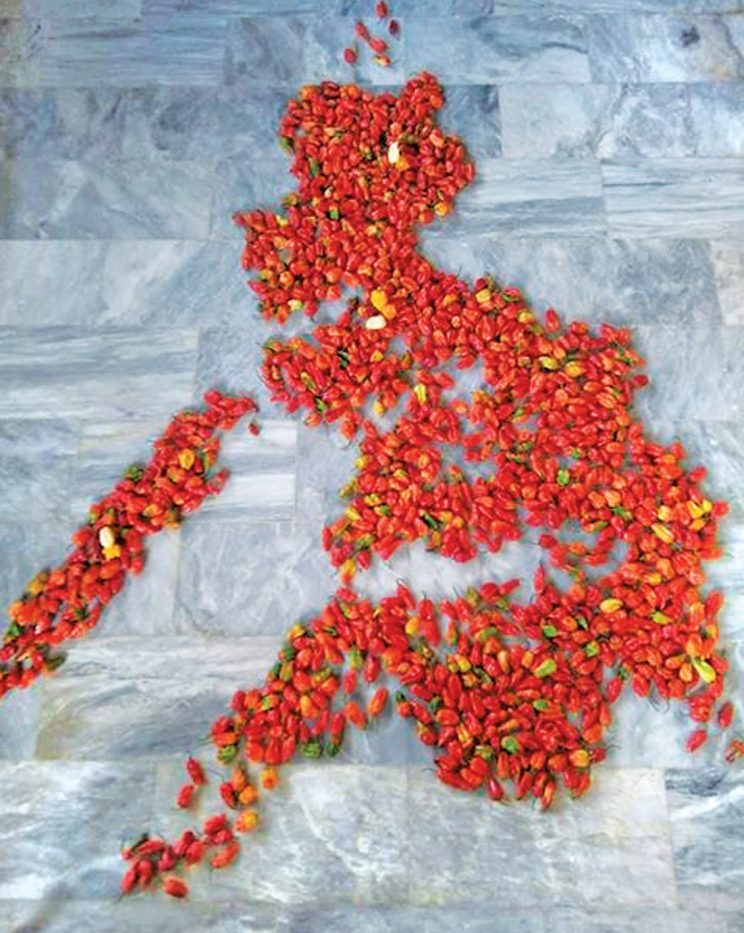 Superhot chilies are peppers whose heat index or spiciness goes above 350,000 Scoville Heat Units (SHU) on the Scoville Scale, which is used to measure a chili’s spiciness. Examples of these are the New Mexico Scorpion with 1,191,595 SHU and the Dragon’s Breath with 2,480,000 SHU.

Cabrera considers growing these types of chilies as more profitable since there is an increasing demand for superhot chilies in the local market that is not met due to its supply scarcity.

Furthermore, he believes that Filipino farmers also have the potential to produce superhots and benefit from it.

A profitable change from the usual

In 2016, Cabrera planted his first chili variety: the Taiwan chili. Known for its bright red and long fruits, the Taiwan chili is commercially used in restaurants all over the Philippines. Later, he realized that the chili type is prone to Anthracnose disease.

Anthracnose, also known as fruit rot, is a common disease among plants. It leaves small, circular spots throughout the plant’s leaves, stems, and fruits. Severely affected fruits can drop from the plant, resulting in a heavy loss in yield.

To solve his problem, Cabrera decided to look for another chili type that is more resilient than his first choice. He then turned to local groups, such as Chili Growers Philippines, to ask for suggestions on what he should grow next.

Habanero peppers are a hot variety of chili pepper with 100,000 to 350,000 SHU. The pepper is short and broad, with thin skin whose color ranges from yellow, orange, and red.

Despite its heat index surpassing that of the siling labuyo, habanero peppers still fall short of being a superhot chili since there are other strains that are spicier. However, habaneros can still set a person’s mouth ablaze, which is why these are incorporated in salsas and sauces to tame the flame.

Knowing the potential of the habanero pepper as an alternative to its local counterparts, Cabrera, along with other chili growers, imported around 10 to 20 seeds so they could acclimatize them to Philippine conditions.

From the initial sowing, it takes about 120 to 125 days before the plant bears its first fruits. These fruits are then harvested by the growers for its seeds.

“As growers, we harvested seeds from the best fruits of our chili plants because it has already adapted to our weather conditions and it also serves as a reflection of what future plants could look like during the next planting seasons,” Cabrera said.

The harvested seeds are then used to proliferate the variety throughout the grower’s farm or are sold to interested buyers.

In the one hectare where Cabrera first planted his habanero peppers, he managed to harvest 250 to 350 kilos.

Over time, Cabrera started growing other chili varieties which include ghost peppers and the world’s hottest chili: Carolina Reapers. Currently, he has around 30 varieties growing on his farm. 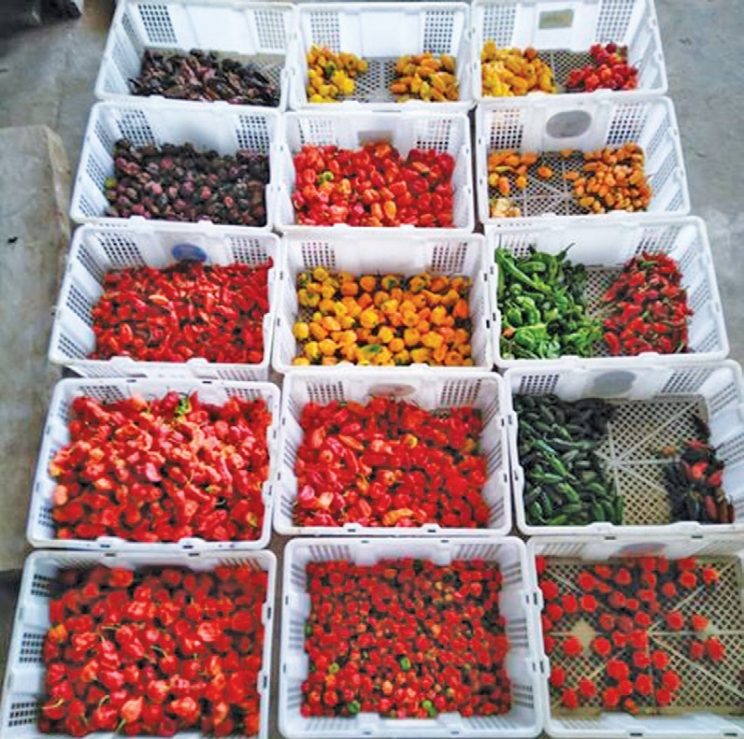 Around 30 kinds of chilies are growing in Cabrera’s farm.

In comparison with the other chilis, Cabrera prefers the habanero because it is more resilient to the country’s extreme weather conditions. Still, most superhots can be sold at a high price in the market.

“It was a gamble when I first decided to grow habanero peppers since not many [people] were aware about it yet, so there wasn’t a stable market for growers like us,” Cabrera said.

Fortunately, the superhots have become, well, hot in the eyes of consumers after their flavor profiles and spiciness have been discovered. Cabrera is one of the farmers who enjoy the popularity of this special kind of chilies.

He sells his habaneros for P450/kilo and above, depending on weather and market conditions. In the meantime, the Carolina Reapers can fetch a hefty sum of P1,000/kilo.

Since farming is Cabrera’s area of expertise, he has yet to venture into processing his crops into other products. However, he still makes the most out of his harvest by selling it to restaurants and hot sauce makers in different parts of the country.

“Before I harvest, I get orders from Manila from small hot sauce makers or restaurants so I can properly allocate my produce. There are even times when my harvest reaches areas like Sultan Kudarat in Mindanao,” the chili grower said.

The secret is in the soil

Cabrera’s success in growing didn’t come purely out of luck. The 39-year-old farmer said that he did his fair share of laboring on his farm just to ensure a bountiful harvest from his crops.

“As a farmer, we rely heavily on the soil. That’s why it’s important to prepare the land properly,” he shared.

By this, Cabrera means cultivating the land to lessen the presence of both weeds and insects as well as to aerate soil so oxygen and other nutrients can easily reach the plants.

During the growing stage of his chili plants, Cabrera uses commercial inputs, but he then shifts to applying organic material such as chicken manure and cow dung once the fruiting stage has begun.

Cabrera was exposed to farming at a young age since both his parents were farmers. Presently, he now manages their farm where he also grows pinakbet variety vegetables like okra, eggplant, and ampalaya, or bittergourd. He also grows rice, corn, pineapples, and other fruit trees on their farm.

“We [farmers] should give importance to what we’re planting because when properly maintained, our [high-value] crops can be a good source of income,” he said.

Cabrera also said that having high-value crops can also serve as a favorable alternative to staple crops-especially with an unpredictable market.

Additionally, he said that this appreciation could also help promote the work of small farmers by making consumers realize that top quality produce is often a result of extensive labor, determination, and a little bit of ambition. (Photos courtesy of Manny Cabrera)