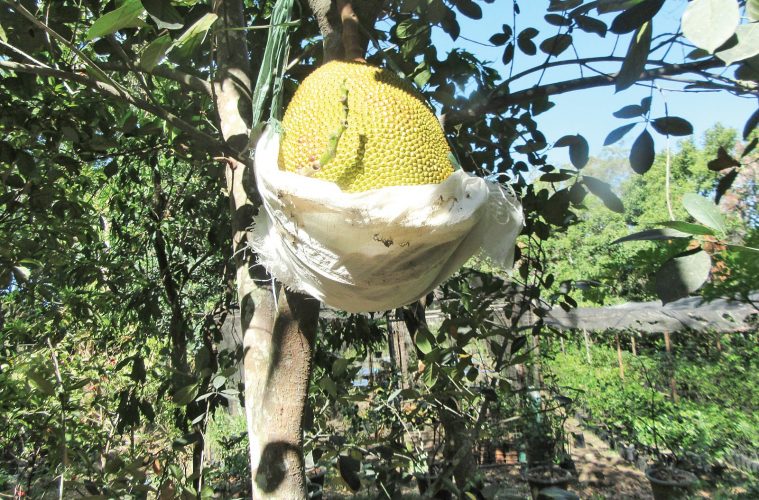 Tale of a red jackfruit that turned out dark orange

On May 3, 2019 we harvested the first fruit of a four-year-old jackfruit tree that was grown from a seed of a Red Jackfruit that was originally introduced from Thailand by the late national scientist Dr. Benito S. Vergara.

The original tree that we planted in our farm in Teresa, Rizal, bore fruit only once because it was damaged by a wood borer. Anyway, the aril, or flesh of the fruit, was light red and we were excited to germinate the seeds because the variety was something new and different.

We germinated about 75 seedlings, but we only retained only five for our own little farm. One of the trees bore its first fruit, which we harvested on May 3 (2019) and opened on May 7, when it was already fully ripe. We expected to get a reddish flesh, but there was no clear sign of redness. Instead, the flesh was dark orange. We were thinking it could be a combination of red and the light orange flesh of the latexless jackfruit from Malaysia, which we have been propagating for many years now. 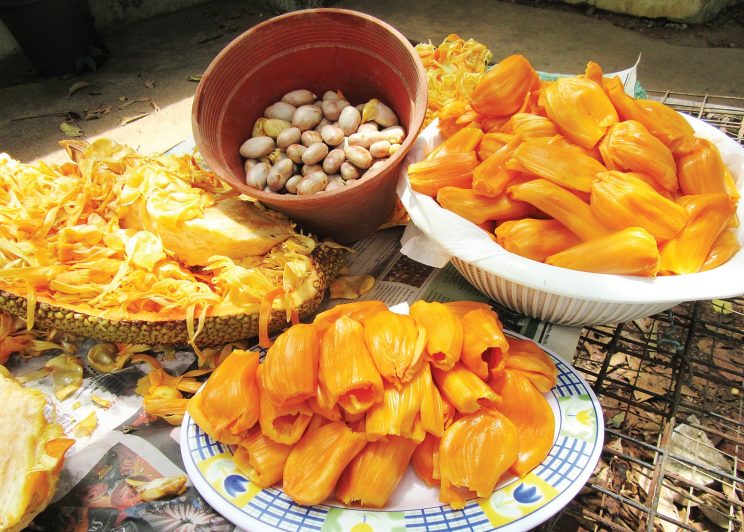 Anyway, we are very pleased with the outcome. We love the big globose shape of the fruit, which weighed about 12 kilos. And the aril is very plump, juicy, and sweet; and the seeds are small. There’s minimal latex, too in the ripe fruit, unlike many of the ordinary fruits that we see in the market.

The fruit yielded 140 seeds, which we already sowed in black plastic nursery bags. We expect 100 percent germination because we are using a very good medium for sprouting. In four months, the seedlings should be ready for planting, or they can be grown into large planting material that are four to five feet tall for better survival in the field.

More farmers should grow jackfruit in their farms, especially the selected varieties, because jackfruit is high-priced in the market. We were at the AANI Weekend Market at the former FTI recently and we saw a kilo of sliced fruit being sold for R90. Jackfruit is less expensive to grow than other fruits, like say, mango. Mango requires a lot of spraying with insecticide and fungicide. In jackfruit, the main enemy is the fruit borer, which could be prevented by bagging the fruits with an ordinary sack when the fruit is about the size of a baby’s head.