Volunteer workers are shown installing a solar panel to one of the five beneficiaries under the humanitarian project of the NOAC Batch 1990.

For a remote community of a mountainous area in Negros Occidental, a class reunion paved the way for agroforestry development in an effort to help make the life of local villagers more productive and eventually awaken their capabilities to strive more for their families.

However, organizing the class reunion was not an easy task for Central Philippines State University (CPSU) President Dr. Aladino C. Moraca since he has to initiate the meeting of his former classmates, and this time, for a worthwhile cause instead of the usual cocktail hours where previous schoolmates often get together and catch up, reminisce about the past, rekindle friendships, and create long lasting bonds.

The initiative, however, was realized after he tapped the services of the school’s Research and Extension Office, the Graduate School, and members of the CPSU Alumni Batch 1990 for the installation of solar power systems for at least five more houses located at Sitio Cabugan in Barangay Tagucon, Kabankalan City, Negros Occidental. 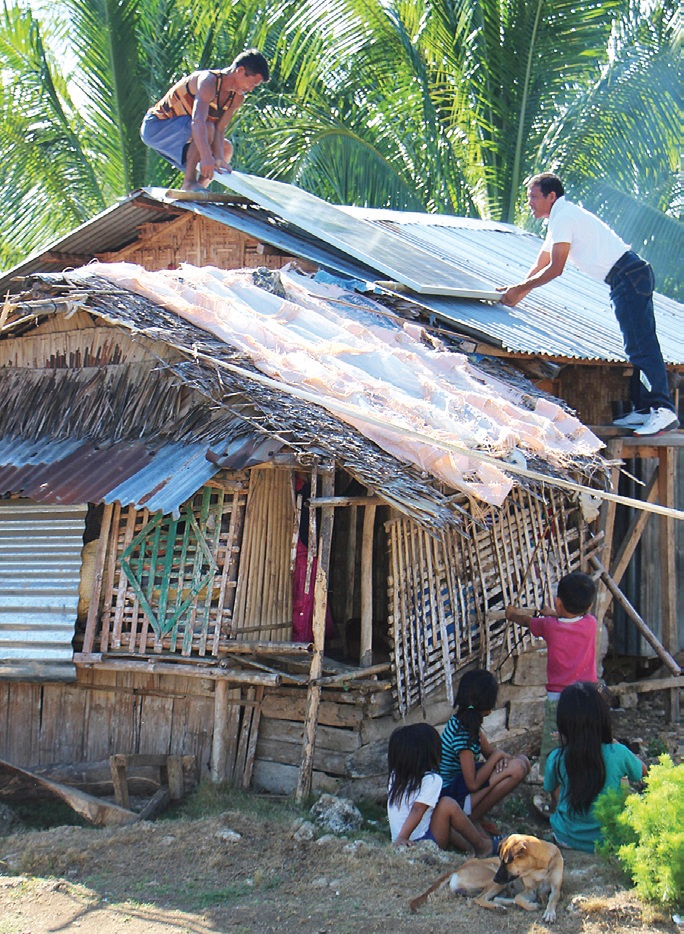 Volunteer workers are shown installing a solar panel to one of the five beneficiaries under the humanitarian project of the NOAC Batch 1990.

This initiative sparked a modest fund-raising drive among the members of CPSU Alumni Batch 1990, where Moraca is one of the graduates, together with some unexpected contributions coming from individuals for the acquisition of materials and equipment for the humanitarian project.

Moraca says the agroforestry initiative can provide livelihood opportunities for residents in the targeted waterless and powerless community, as well as college education for their children.

Agroforestry is very vital for biodiversity because it can provide a more diverse habitat than a conventional agricultural system, and the objective of the project is to provide an opportunity for deserving recipients who have shown dedication in the promotion and practice of organic farming and biodiversity conservation.

The components of the project include, among many others, a solar system composed of a solar panel, storage battery, electrical wiring, and a converter which can provide the basic power needs of an average home located at a remote area like Sitio Cabugan.

Last year, the CPSU partnered with concerned government offices, including the private sector, for the initial installation of home solar power systems for at least two identified recipients.

According to Moraca, this is actually a trade-off in exchange for the recipient’s commitment to conserve and maintain at least a hectare of forest patch in the surrounding area where a natural water source is available.

In fact, the project kick-started the CPSU’s Training Workshop on Household-based Designing and Installation of Solar System.

“This is a simple transfer of technology for the targeted farmers, which is part of the advocacy of the CPSU, particularly its College of Agriculture and Enterprise Development Unit, to provide technical support for the development of Organic Farming and Agri-Tourism, adopting the Climate Smart Agriculture Practices,” Moraca pointed out.

Following this development, Moraca is planning to prioritize the installation of more solar power systems at Sitio Cabugan where at least 7 out of 27 have already benefited under the project he conceptualized.

The power generated from the solar system can now provide the electricity needed by the beneficiaries during the night which can greatly help their children study.

In 2018, the CPSU partnered with Bacolod City-based RU Foundry and Machine Shop Corporation and EcoAgri Development Foundation, Multi-Sectoral Alliance for Development-Negros (MUAD-Negros), the Office of the Provincial Agriculturist (OPA) of Negros Occidental, and Foundation for the Philippine Environment for the installation of solar power facilities and rainwater collection systems for two initial beneficiaries.

In exchange, each recipient has to allot 1.5 hectares for organic farming, protect the forest, and send their children or a nearest relative to study at the CPSU.

The activity was actually the launching of the CPSU’s College of Agriculture and Forestry’s trade-off community-based natural resource management program.

It is an extension service where the recipients agreed to receive the CPSU’s humanitarian services in exchange for their effort to manage natural resources in their community.

During that time, Nestor Obejero of Sitio Cabugan was the first recipient of the solar power system and rainwater collection unit based on his ability to lead community organizations, which influenced other farmers to adopt organic farming practices.

Moraca says this is among the concerted efforts of the CPSU to work peacefully in partnership with the farmers and other stakeholders who have been occupying some portions of the university’s reservation area to increase productivity and attain food security.

“This can also encourage the active participation and involvement of the students and members of the faculty in partnership with the farmers,” he says, adding that “programs and projects tapping the support of the private sector, local government units, line agencies, and other stakeholders will definitely showcase the best practices in agriculture.”

Following this initiative, members of the Negros Occidental Agricultural College, or NOAC Batch 1990, which was converted to CPSU in 2012, is now governed by a humanitarian heart and a passion to continue the initiative hatched by Moraca for the coming years.

The implementation of projects similar to this agroforestry development initiative is expected to make the residents of other remote communities become more productive, and at the same time, become sustainable.

How to make Fermented Fruit Juice for fertilizer